Cover art for KELLANVED'S REACH, the next MALAZAN novel

Bantam Press have released the cover art for Kellanved's Reach, the next novel in Ian C. Esslemont's Path to Ascendancy series, set in the Malazan universe he co-created with Steven Erikson. 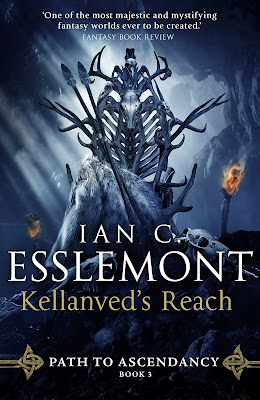 The book is the third in a prequel series, so far consisting of the well-received Dancer's Lament (2016) and Deadhouse Landing (2017). Esslemont and Bantam signed a three-book contract for the series but have indicated it may go longer, especially since the titular Ascendancy doesn't happen until around 100 years after the events of the next book and the series has sold very well.

The incessant war between the bickering city states of Quon Tali rages. So engrossed are the warring lords and princes in their own petty feuds that few notice that an upstart mage from Dal Hon has gained control of the southern seas. But some powers are alarmed. And in the meantime, as Purge and Tali indulge in what seems like a their never-ending game of war, a mercenary caught up in the fight between the two states suddenly refuses to play along and causes all sorts of chaos. Simultaneously, a pair of escapees from Castle Gris make their way across this ravaged landscape of flame and butchery. Their intention to seek out the legendary Crimson Guard.

And then there's Kellanved who could not care less about any of this petty politicking or strategy or war. Something other and altogether more mysterious has caught his attention and he - together with a reluctant and decidedly sceptical Dancer - traverse continents and journey through the Realms in pursuit . . . But this ancient mystery that has so captivated Kellanved is neither esoteric nor ephemeral. No, it is of an altogether darker and more dangerous hue. It involves the Elder races themselves, and more specifically - certainly more alarmingly - the semi-mythic, and universally dreaded, Army of Dust and Bone.

Surely no one in their right mind would be so foolish as to embark on a journey from which none have returned? Well, no one except Kellanved that is . . .

Returning to the turbulent early history of what would become the Malazan Empire, here is the third awesome chapter in Ian C. Esslemont's new epic fantasy sequence.


Meanwhile, in other Malazan news, Steven Erikson is working on The God is Not Willing, the first novel in The Witness Trilogy, which is set after the main Malazan Book of the Fallen sequence and focuses on what happens when Karsa Orlong finally returns home to northern Genabackis, along with following up events in Darujhistan. I'd wouldn't expect this book much before 2020.

In the meantime, The Second Tales of Bauchelain and Korbal Broach will be released on 20 September (yes, next month). This collects the Malazan novellas Crack'd Pot Trail, The Wurms of Blearmouth and The Fiends of Nightmaria into one handy volume.
Posted by Adam Whitehead at 20:59

Awesome! can't wait as more Malazan is always a good thing and i've been enjoying the hell out of this new series.
Is there any word of wherever Erikson will finish the Kharkanas trilogy after the Karsa books? Because they were great and it would be a same to see it get left undone.

I enjoy the Ian Esslemont novels quite a bit more than the "Steven Erickson" books.
They have flaws and sometimes lack polish but I enjoy reading them. I don't feel worse after I close the book than I did when I opened it. He writes his characters more like real people, they're more identifiable.

I'll be buying this book as well, thanks for the heads-up.

How well does Ian Esselmont sell compared to Stephen Erickson?

Good to hear it will be more than three books.

The original 10-book series I believe has outsold (on a per-book basis and considering the different time frames involved) ICE's novels, but ICE's novels have still sold decently, enough for all of them to get published.

The recent Kharkanas Trilogy apparently bombed quite hard, whilst ICE's current Path to Ascendancy series has sold extremely well. So right now, with their current books, Esslemont is out-selling Erikson.

Wat, ehm... I meant the Spock casting. I just clicked on some comments.

I think the 10 book Malazan book of the Fallen series is amazing beyond belief. That being said, after having read the two Kharkanas books, I have little interest in reading anything new by Erikson. He is simply to full of himself.

Esslemont just gets better and better with every new book though, hopefully he keeps giving us more.