The fourth film in the Star Trek reboot movie franchise (which began with J.J. Abams' 2009 film) has hit a major snag in development. Star Chris Pine - who plays Captain James T. Kirk - and guest star Chris Hemsworth - who played Kirk's dad in the first film and is returning in this one, presumably as part of a time travel story - are both claiming that Paramount has reneged on their previously-agreed pay deal and have refused to commit to the project until their previous pay package is honoured. 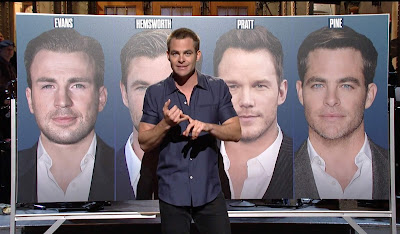 Chris Pine and Chis Hemsworth are part of the current Chris Movement in American cinema, a period exemplified by a profusion of Chrises in major blockbuster film franchises. Peak Chris began in 2018 when Evans, Hemsworth and Pratt co-starred in The Avengers: Infinity War and will conclude when its sequel is released in May 2019.

To rewind, the reboot Star Trek franchise began with Star Trek in 2009 and continued with Into Darkness in 2013 and then Beyond in 2016. Even before Beyond was released, producer J.J. Abrams (despite being busy working on the Star Wars movies) had apparently pitched and won early approval from Paramount for a fourth film featuring Kirk meeting his father, and early deals for the regular cast and Hemsworth were put in place.

However, a major snag then developed: Star Trek Beyond, despite positive reviews and being widely credited as the best of the reboot movies (and possibly the best Star Trek movie since the release of First Contact in 1996), did not do well at the box office. It returned $343 million against a budget of $185 million, a drop of $120 million compared to Into Darkness (which had an identical budget). It only just scraped into profit via home media sales and streamings.

Paramount's interest in a new film cooled - possibly not helped by Abrams' decamping from the franchise to work on The Force Awakens (2015) - and they began exploring other takes on the series, including possibly an R-rated film directed by Quentin Tarantino, to the bemusement of fans.

However, with Abrams making himself available again after The Force Awakens and Tarantino deciding to fit in another film before the Star Trek project, Paramount decided to push forwards with the fourth Star Trek film earlier this year, possibly buoyed by the success of Star Trek: Discovery on CBS All Access. Abrams' 2016 pitch was dusted down and put into development with new director S.J. Clarkson on board.

From the news reports, it sounds like Paramount wanted to renegotiate contracts on the basis of Beyond's underperformance. This would help lower the budget and reduce the cost of the movie compared to its forebears. Apparently the rest of the cast, including well-known (and healthily-remunerated) faces such as Karl Urban, Zoe Saldana, Simon Pegg and Zachary Quinto, had agreed to the adjustment to help get the film made. However, Chris Pine has recently established himself in the Wonder Woman movie franchise and Hemsworth has starred in six of the Marvel Cinematic Universe films as Thor (including this year's $2 billion-grossing Infinity War) since his previous Star Trek appearance, and neither are willing to drop their price tag.

Negotiations are apparently now suspended, although the film's development is continuing, which is usually a sign that the studio expects negotiations to resume and the problems to be overcome. Solutions would include dropping Hemsworth's character from the film altogether and adjust the script, recasting Hemsworth (which may be viable as his character was in the first film for about five minutes), recasting Pine (much less likely) or simply meeting their pay requests, or making a new pay deal somewhere between the two stools, although this may go down badly with other actors who have already agreed to pay reductions.

Whatever the outcome, it is likely the Star Trek movie franchise will continue. In the meantime, CBS All Access has doubled down on the success of Star Trek: Discovery by commissioning a series focusing on Patrick Stewart's character of Jean-Luc Picard at an advanced age.
Posted by Adam Whitehead at 22:45

Looks like they've got a real Chrisis on their hands. :P