Liberty City, 2001. A young man takes part in a bank robbery, is betrayed by his girlfriend and is sent to jail. Escaping from the prison van when another prisoner is busted out, he lays low in the Portland district of the city, doing jobs for the Mafia and building a reputation for getting work done, whilst he plots his revenge. 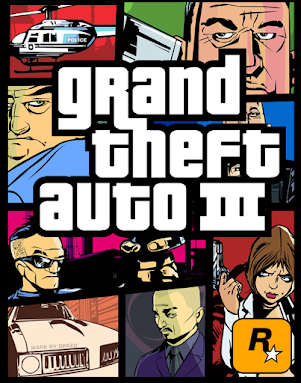 Released in October 2001, Grand Theft Auto III has been occasionally described as the most important video game ever made. It wasn't the first open-world game - Elite, at least, had that locked down in 1984 - and it wasn't the first game that allowed you to steal cars and commit crimes - see the top-down, 2D Grand Theft Auto (1997), its two expansions and first sequel - but it was the first game that combined the two elements with a 3D viewpoint to create the first open-world action game set in a city, with an eye to accessibility for the masses. Alongside The Elder Scrolls III: Morrowind, released the following year, GTA3 set the scene for today's dominant genre of video games.

Being - somehow - twenty years old, GTA3 is still somewhat embryonic in its presentation of open-world gameplay and storytelling. The story is minimalist to the point of almost non-existence. There are very, very short cutscenes at the start of the game and before each mission, your character never speaks (making his motivations inscrutable) and doesn't even have a name ("Claude" was a retcon introduced in GTA: San Andreas three years later). This is weird and occasionally confusing, but also refreshing: later GTA and Red Dead Redemption games fell a little bit too much in love with their cutscenes, with it taking longer and longer to actually get into the action. GTA3's brisk pace is refreshing in comparison. You can play the entire game from start to finish in well under 20 hours, less than half of San Andreas or GTA4's playtime and less than a third of Red Dead Redemption 2, although if you decide to hunt down every secret package and stunt jump, without looking online, it might take a bit longer than that. Liberty City v2.0* feels quite small these days. Not tiny, but definitely on the smaller side of things. This isn't completely a bad thing, and it's certainly possible to learn your way around the entire city by heart, something that is flat-out impossible in modern open world games where the city is gigantic but you never have reason to visit 75% of it. The small size of the city also alleviates some problems in UI and presentation. There isn't a discrete map screen, only your minimap in the corner, and the game only places dots showing the direction to your target, not the optimal route. On occasion you'll be thundering towards your destination with a tight time limit only to realise with horror that it's on the other side of a major river and you have to double back to find a bridge or tunnel. There's also no automated saving, at all, and certainly no automatic saving before missions: if you fail a mission you have to manually drive back to the trigger point. A much smaller city makes all of these problems far less aggravating than if it was as big as cities in later games in the series.

As with most open world games, you have the option of pursuing several goals at once. You usually have one or more missions available and can also jump in a taxi, police car, fire engine or ambulance to make extra money. It is possible to shut down questlines if you are asked in one mission to kill the mission-giver of another, which is realistic but can also be somewhat annoying if you're trying to 100% the game, so you have to be careful to make sure you're not about to make parts of the game's story inaccessible. The game also throws repeatable missions at you, usually racing of one kind or another. 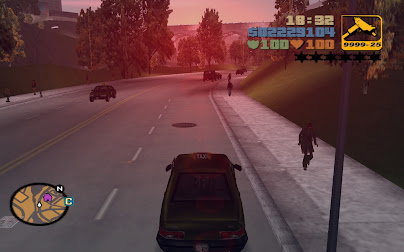 Some missions also require combat, although not as much as you'd think. This is a good thing because combat in the game is weak. Shooting is unsatisfying and the mouse controls are fairly twitchy and sensitive, making precise shooting difficult. Fortunately the game is fairly forgiving about accuracy outside of using things like sniper rifles (and scoped weapons are much easier to use than the standard ones).

The amount of content for the game was impressive back in 2001, although no great shakes these days. That does lead to a key question: is there any reason to play Grand Theft Auto III in 2021, beyond nostalgia? Certainly from a historic point of view, it's interesting to mess around in for a few hours, and I think people will be surprised to see what a game that's twenty years old was capable of, such as rideable subways and surface trains (which are missing from some of the later games in the series). The car handling is also surprisingly solid, better than some recent games (cough), the soundtrack remains quite decent, the satirical radio humour is (if anything) even more relevant today and what voice acting there is, is excellent. 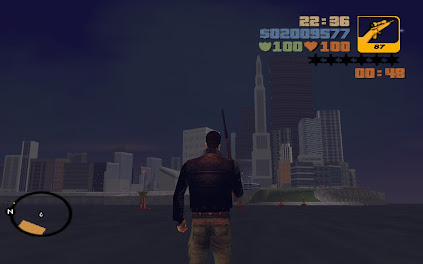 Grand Theft Auto III (***½) is an important historical artefact of a video game, and has aged better than I was expecting. I wouldn't necessarily to recommend it as anyone's first open-world game today, but perhaps if you're a deeply invested fan of Grand Theft Auto V, it'll be worth going back to check out where series really got going. The game is available now for PC, Android and Apple devices, and of course on PlayStation 2 and X-Box (the original) if you still have one working (or for later consoles via compatibility mode).

Technical Note: For this replay of GTA3 I used Qualcom's "Definitive Edition" mod. This is a simple mod that makes the game work in widescreen at modern resolution and improves textures without changing the original aesthetics or intent of the game. This also removes a few outstanding bugs from the original version of the game (such as the famous one where running down a slope occasionally throws you hundreds of feet through the air, usually with fatal results). Obviously this is only works on the PC version of the game. It should be noted that GTA3 really dislikes multi-monitor setups and you have to disable your secondary monitors before launching the game if you want to play it properly.