Thanks to detective work by the team at Westeros.org, it appears that the long-percolating TV version of the Wild Cards shared universe has moved home. Previously in the works as an NBC-Hulu collaboration, it now appears to have found a new home at NBC's Peacock streaming service. 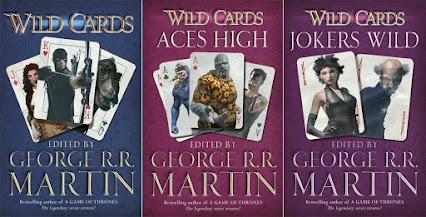 Peacock launched last April in the United States and is heavily reliant on legacy programming such as The Office and Parks & Recreation. It is unsurprising that they would be looking to bolster their lineup with original fare, and the Wild Cards universe gives them a large roster of superhero characters to develop shows around.

The Wild Cards universe was created by George R.R. Martin in the early 1980s as a roleplaying game setting. Starting in 1987, Martin began editing and publishing linked anthologies of stories from numerous writers in the shared world. Melinda Snodgrass has been heavily involved in the creative side of the universe, and writers including Paul Cornell, David Anthony Durham, Pat Cadigan, Emma Newman, Mark Lawrence, Roger Zelazny, Howard Waldrop, Daniel Abraham, Ty Franck and Walter Jon Williams have contributed stories to the setting. The twenty-ninth book in the series is scheduled for release this year.

Martin's other commitments preclude working on the show, so the heavy-lifting on Wild Cards is being done by Melinda Snodgrass (who previously worked on Star Trek: The Next Generation as a writer and script editor, penning one of the show's most beloved episodes, The Measure of a Man) and Michael Cassutt (Z Nation, The Outer Limits).

Meanwhile, the same source reveals that Martin's novella Sandkings is in development as a feature film at Netflix. Sandkings was previously filmed - heavily reworked by Melinda Snodgrass into a contemporary setting - as the opening episode of the second version of The Outer Limits in 1995.