Kabul, Afghanistan. Parvana is an 11-year-old girl living in a city under the control of the Taliban. She helps her father sell his wares at the market every day, but when he is arrested and taken away Parvana is left as the family's sole breadwinner. Unable to go out on the streets alone and unescorted, she cuts off her hair and poses as a boy. As times become leaner, she is forced to work harder and take more risks to ensure her family's survival. To keep them entertained, she tells them stories of the distant past, when Afghanistan was part of Parthia and heroes fought elephant kings in order to protect their people. 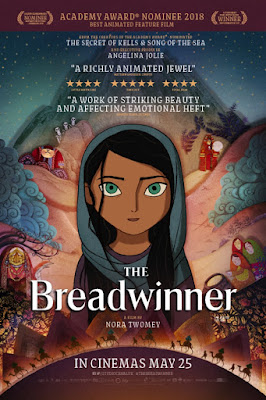 The Breadwinner is a 2017 animated film from Irish studio Cartoon Saloon, based on the 2000 novel by Deborah Ellis. The film is set in the capital city of Afghanistan was it was still under Taliban control. This resulted in an oppressive atmosphere with informers on every street corner, limited food supplies and women forced to cover themselves from head to foot and not allowed out on the streets without a male relative accompanying them. The story asks a simple question: what happens when the sole male breadwinner for a family is arrested and taken away, leaving the women behind, effectively trapped in their house?

The result is a story that's both relevant to the time it was written in, but also timeless: the family's young daughter has to disguise herself as a boy, Aatish, in order to work to afford food and get water for her family. This results in both tension - Parvana is at constant risk of discovery - but also liberation. Parvana has spent much of her young life under Taliban rule, so the sudden freedom to go where she wants and do what she likes (within reason) is liberating, to the point of risking overconfidence.

As the film's main narrative unfolds, where Parvana tries to help her family and discover her father's ultimate fate, so too does a secondary story which Parvana is telling to her baby brother every night, the story of a young hero who seeks to confront the Elephant King who has stolen his village's crop seeds. Parvana finds herself drawing on the story for comfort and solace, as it teaches her resilience and fortitude even in the face of insurmountable odds.

The film uses two styles of animation, one for each narrative strand and both are impressive. The Elephant King story takes on a storybook tone, with the animation suggesting paper figures animated in a more fairy-tale quality, whilst the "real world" material is still stylised, but more realistic. The voice actors, most of them Afghan, are also excellent, selling a story which can be both grimly bleak but also optimistic for the future.

The film is also successful in depicting life under the Taliban with nuance: many people, even ostensible Taliban soldiers, are clearly doing what they are doing under coercion and fear and take no real joy in oppressing others, whilst others are bullies taking delight in being given the freedom to exert their brutal authority. Some fight against the system, a few openly and a few through some acts of kindness for others. The film does not extend into the post-2001 civil war period, so we never find out how Parvana's life changes after the Taliban in Kabul are driven out, but the film does sound several notes of hope that things will improve, at least in part for these characters.

Instead, The Breadwinner (*****) remains anchored firmly with the characters, showing them adapting to life under difficult circumstances and finding ways of surviving and finding hope. There are no easy answers, but there is optimism to be found here in the depiction of human courage. The film is available now in the UK and USA.
Posted by Adam Whitehead at 14:28