August, 2007. A meteorite falls on northern California. A whistleblower goes public with evidence that the US government has been in communication with an alien intelligence and flees to Germany. His daughter, embarrassed by his behaviour, tries to ignore the unwanted cult of celebrity and get on with things. Suddenly a second meteor falls on apparently the exact same sport as the first, a coincidence so remote as to be effectively impossible, and suddenly the implausible feels very real indeed. 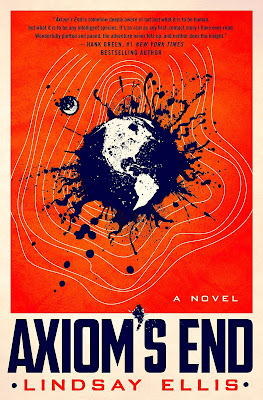 Axiom's End is the debut novel by Lindsay Ellis, a popular video essayist and film critic known for her deep dives on the making of film and TV shows. She was nominated for a Hugo for her three-part series on Peter Jackson's deeply troubled Hobbit film project, and also posted an excellent analysis of the problems with Game of Thrones.

Fortunately, it turns out she's pretty handy in the realm of fiction as well. Axiom's End is a story about humanity encountering an alien race, only to find the aliens are almost impossible to communicate with due to the total absence of common frames of reference. Early parts of the book, where the existence of the aliens is unclear, are framed like an X-Files thriller where government agents are keeping tabs on a young woman because of what she thinks is her father's criminal activities. Cora gets first-hand evidence that the aliens are real and that pretty much everyone is in the dark about what's really going on, resulting in a satisfying story shift where she gains more power, knowledge and agency because of her own experiences (a nice inversion on the more traditional story where the protagonist is always playing catch-up with the plot but somehow ends out coming on top).

There's some pretty cool horror scenes early on, and a vein of humour running through the books which stays just on the right side of dated pop culture references (the alternate-past setting helps with that). Cora's conspiracy theorist father - Edward Snowden fused with Fox Mulder - starts off as an all-knowing sage drip-feeding the audience with hints of greater knowledge via excerpts from his blog, until you realise he doesn't really know anything either and is desperately trying to make himself seem more important than he really is (sort of a budget Melisandre in the story) whilst also falling way behind the curve of the story, which becomes increasingly amusing.

The second half of the story feels like it slightly undercuts its own premise. The aliens initially appear almost too different for humans to effectively communicate with them, but ultimately a method of communication does appear which ends up being about as good as Google Translate (i.e. mostly okay with the occasional clunker), which makes the story way more manageable, but some of the unique atmosphere of the story is lost. It is replaced by a more traditional story about people from completely different civilisations trying to overcome apparently insurmountable odds to establish a rapport. This is excellently handled, but it does feel that the story has switched directions from something a bit weirder (think China Mieville's Embassytown or Ted Chiang's The Story of Your Life, later filmed as Arrival) to something a little more traditional (maybe Starman with a slightly less attractive and indeed non-humanoid Jeff Bridges).

There are still a lot of interesting plot twists and the weirdness of the aliens is maintained through their technology and weapons; when two of the aliens come into conflict, Ellis successfully portrays the idea of humans interfering as being akin to a gnat trying to stop a jet fighter dogfight. There's also another raft of thematic ideas related to first contact that are intelligently explored, from the existence of the so-called "Great Filter" (the puzzle that if intelligent, technologically-advanced life is possible, as we have shown, why hasn't it already colonised the galaxy?) to the dangers incurred when a more technologically advanced species encounters a less technologically-advanced one.

Axiom's End (****½) may end up being a bit less strange than it initially promises, but it's still a compulsive page-turner with a nice line in both terror and humour. There will be sequels - the book is touted as the first in the Noumena sequence - but the book has a fair amount of closure to it and no immediate cliffhangers. It is available now in the UK and USA.
Posted by Adam Whitehead at 14:31

I love Lindsay's YouTube stuff but was a bit disappointed by this. The ideas are good but I found the prose to be pretty clunky and after about 20 % it became a chore. I gave up at that point and started re-reading Caine Black Knife. Now there's some good prose!

I might try again when the next one comes out, but probably not.