Louise Banks is a linguist, haunted by images of her daughter who died at a young age from an incurable disease. When twelve alien spacecraft materialise around the world, including one in Montana, Louise is asked by the US government to lead attempts to communicate with the occupants, seven-armed, squid-like aliens nicknamed Heptapods. Louise concludes that the aliens' verbal language is completely indecipherable but finds more meaning in their written language, a dizzyingly complex collection of subtly shifting ink swirls. As Louise falls deeper into the alien language she finds it awakening more and more visions...but also finds signs that the aliens want something from the human race, and an offer that may also be a threat. 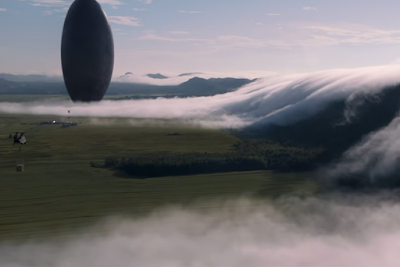 It is only ever possible to watch Arrival once. When you have watched it, it you can never watch it again, not properly. You will only ever be able to experience the memory of it. It's not entirely the first movie that's done this, and people will wax lyrical about "twists", but that's a simplistic disservice. When the story elegantly opens up and tells you what's really going on, it's an absolutely dazzling moment which makes the audience feel what the characters felt during an earlier set piece, during which the gravity in the alien spacecraft shifts and the walls become the floor. This is quantum movie watching, where the act of observing it changes the work and the observer, and it's an experience I've never had watching a film before. It's just one of the breathtaking feats that director Denis Villeneuve and scriptwriter Eric Heisserer accomplishes with this movie.

Arrival is based on the short story Story of Your Life, published in 1998 by Ted Chiang, the best science fiction author you've never heard of. A low-key figure on the SF scene, he has written just fifteen short stories and novellas in twenty-six years, but each short story is an Event which sends fans of hard science fiction scrambling. His 2002 collection Stories of Your Life and Others (he hasn't - yet - published enough material to warrant a second collection) is widely cited as the greatest SF short story collection of all time, certainly by a single author, and the title story is often-cited as the best short work of SF of all time.

Story of Your Life is the hardest of hard SF stories, riffing on the Sapir-Whorf hypothesis of linguistics, Fermat's principle of least time and how causality interfaces with free will. It's also a deeply emotional story about parenthood, communication and empathy. It should be completely unfilmable. It isn't. Arrival - despite the rather unnecessary title change - is a masterpiece of SF cinema.

We've had a lot of "thinking screen SF" in the last decade and a half or so, from A.I. to Moon to Gravity to The Martian. Some of it has been brilliant, but blighted by a chickening out into needless action or deaths (Sunshine), or by a plot hole-ridden, overwrought ending (Interstellar). Arrival may be the best of the lot for its sharp, laser-like focus, lack of sprawl and Villeneuve's resolve in keeping cliches out of the camera lens. Several times during the movie, guns are fired. Each time it is off-screen, and more dreadful for what you imagine happening than any identikit firefight could be. At another point there is a big-ass CGI explosion, but it also accompanies a moment of profound plot revelation and emotional power which is more important than the fireball. The alien ships show up with a relative lack of fuss, without any five-minute CGI tracking shots and images of people gaping at the sky. We don't see the ship or the aliens until Louise does, which is a wise and canny show of restraint.

The film focuses on Amy Adams's character almost completely, so it's a good thing that she dominates the film with an intense, measured performance. She discovers and learns things about the aliens as we do, and makes the connections about what's going on at the same time we do, leading to a rare moment of total audience and character connection that's genuinely powerful. She pulls it off with her typical skill. Coming off the back of Nocturnal Animals, it's been a remarkable year for her and between these two films she should really get some major awards next year. Jeremy Renner also does great work in an understated, relatively low-key role for him (and one in which he seems to relish not having to dodge explosions or shoot a bow). 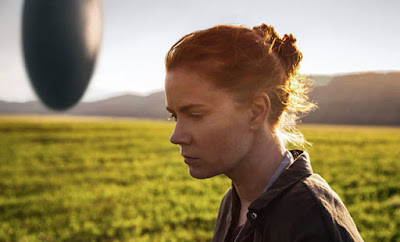 Other castmembers are few, with Forest Whitaker doing the standard out-of-his-depth US general thing and Michael Stuhlbarg playing a completely predictable CIA hawk. More interesting by far is Chinese General Shang, played by veteran actor Tzi Ma. Mostly seen on news screens and overheard in snatched moments, he gives an interesting and key performance despite a very limited screen time. One can imagine an alternate universe where we see the film from the Chinese point of view (probably equally fearing the US are about to do something dangerous that the US are about the Chinese) and it'd probably be still fascinating.

Arrival feels timely, tapping into post-millennial existential angst and contemporary problems with communication, perception, media and political bubbles and plain old-fashioned paranoia and fear. But, like Netflix's superb series Sense8, it mainly traffics in empathy, the idea of understanding and on notions of commonality that transcend national borders and even worlds. It's a deeply human film in which one of the most devastatingly effective emotional lines is delivered by what looks like a faceless twenty-foot tall facehugger from Aliens. It's a film that will leave you thinking - if not actively reeling - for a long time afterwards.

Flaws? Well, the "military guys getting jittery and threatening to blow everything up" trope has been done to death, even if it's a marginal subplot in this film at best. The Chinese being more hawkish and willing to blow up the aliens than the Americans feels a little bit far-fetched. And that's really about it.

Arrival (*****) - which feels right now like it could have been entitled Story of Our Life instead - is a moving, beautifully-directed, wonderfully-written, smart, painstakingly-constructed and unrelentingly intelligent science fiction film with heart and wit. Excellent performances and a fantastic musical score (partly drawing on Max Richter's work) combine to make some thing exceptional and memorable. The film is on general worldwide release right now. And the director's next movie will be Blade Runner 2049, which suddenly got a whole lot more interesting.
Posted by Adam Whitehead at 23:23

The name change makes more sense than normal (e.g. All You Need is Kill). Partly because the original name is a little bland, but mainly because it does highlight the 'twist' to a certain degree. Maybe not a necessary change, but I think a worthwhile one.

I completely agree with your review (which is also very well written) and I have to say that this movie is the best I have seen in 2016.