Show Me a Hero

1988. The city of Yonkers has defied a federal court order to build two hundred units of public housing to meet its growing shortage of living space, and these new homes should be built in different areas of the city to encourage desegregation of the black and white communities. Judge Leonard Sand decrees that the city will be fined until it goes bankrupt if it does not comply. Incoming mayor Nick Wasicsko, the youngest mayor of a major city in the United States, initially opposes the move but, when it is upheld by the Supreme Court, moves to enact the order to his political cost. 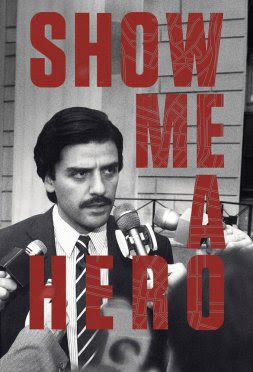 The premise of Show Me a Hero is not immediately gripping: a six-part drama series about urban planning and house building? But then you hear it is being written by David Simon, the creator of Homicide: Life on the Street and The Wire, and one of his co-writers from The Wire, William F. Zorzi, and immediately it becomes interesting.

As anyone who's seen The Wire, The Corner, Generation Kill or Treme can attest, Simon is fascinated by the intersection of communities, politics and social engineering, how decisions made in a city hall council chamber on a wet Wednesday afternoon can affect the life of a single mother and her kids struggling to make ends meet (or a soldier in Iraq or a policeman in Baltimore). There is a cynical viewpoint in the United States (and the UK for that matter) that politics doesn't matter, that everyone is corrupt, and no-one can do anything to change anything, but Simon doesn't have any truck with that. As Mayor Carcetti's story arc in The Wire shows (based loosely on several real-life Baltimore mayors), people can make a difference, if the system allows them.

Show Me a Hero, based on Lisa Belkin's 1999 book, uses the housing crisis as a lens to examine community relations in an American city. Architect and urban planner Oscar Newman argued that by pushing everyone from one community - in this case the African American community - into one tiny area defined by tower blocks with lots of hidden places where crime could take place, like stairwells and inner courtyards, it created a breeding ground for poverty and violence to the detriment of the entire community. His argument was that by splintering the social housing amongst the middle and higher-class districts, and making it nice enough to fit in with the area, then this would benefit the residents and lead to a safer environment, a "defensible space" as he called it. Newman's theories are widely accepted today, but in the late 1980s they were radical and controversial, and Yonkers reluctantly agreed to allow him to use their crisis to carry out an experiment.

This resulted in bitter opposition from white middle-class residents who had concluded that their new black neighbours would bring crime and violence with them, because that's what happened in the existing places. Some people genuinely believed this simply happened whilst others were overt in their racism. More interesting were those who successfully made an effort to welcome their new neighbours, integrate them into their communities and make new friends.

The story, which could be dull in the wrong hands, is told from both the bottom-up and top-down. At the top we have Nick Wasicsko, played with incredible sincerity and ease by Oscar Isaac (Poe Dameron in the new Star Wars movies). Wasicsko is a young rising star of the Democrats, witty and charismatic, an ex-cop with a yearning desire to do good which occasionally conflits with his burning political ambitions, which extend to Congress and maybe beyond. Wasicsko is forced into a difficult but inevitable decision which destroys his career, despite its moral justice, and he struggles with the decision afterwards. Carle Quevedo plays his wife, Nay, who is supportive but also intolerant as his self-pity starts to take over. Winona Ryder (continuing her career resurgence, also seen in Stranger Things) gives a tremendous performance as Vinni Restiano, a political ally of Wasicsko. The best actor in the piece, however, is the magnificent Alfred Molina, who is both almost unrecognisable and tremendously passionate in the role of Wasicsko's arch-nemesis, Hank Spallone. There are also strong turns from Jon Bernthal (The Walking Dead, Daredevil, The Punisher) as a civil rights attorney and Jim Belushi (the 1980s) as Angelo Martinelli. 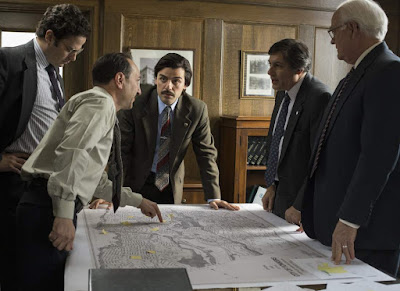 At the other end of the spectrum we have four struggling African-American women: Norma O'Neal (LaTanya Richardson Jackson), a strong-minded, middle-aged carer who is losing her sight; Doreen Henderson (Natalie Paul), a single mother who falls into drug use but, helped by her family, overcomes it; Carmen Febles (Ilfenesh Hadera), a hard-working Dominican immigrant trying to raise her kids on a tiny paycheck; and Billie Rowan (Dominique Fishback), a teenager who falls in with a criminal and makes some bad decisions. It's these women, all played superbly, who stand in for a wider part of the community and whose lives are directly impacted by the decisions made in city hall.

Most interestingly, because they are all too often forgotten, we also have characters from the middle class, most notably the excellent Catherine Keener as Mary Dorman, who initially bitterly opposes the new houses for fear of it ruining the neighbourhood, but then becomes concerned about the growing racism of some of her like-minded citizens and decides to make things better by helping the new arrivals integrate, befriending them in the process.

Show Me a Hero unfolds at a steady, resolved pace, perhaps occasionally too leisurely, backed up by a soundtrack of contemporary artists (with Bruce Springsteen high in the mix). A lot of the action unfolds in town planning meetings and angry city hall exchanges, mixed in with vignettes from the lives of those hoping to escape their crime-blighted tower blocks and the increasingly complex life of Wacisko, who struggles to balance his desire to do the right thing with not destroying his political career. Simon and Zorzi bring the same skill they had juggling multiple, complex and at times seemingly disconnected storylines in The Wire before bringing everything together sharply. As before, "all the pieces matter".

Show Me a Hero (****½) is beautifully-written, well-acted by everyone involved and makes fascinating points about city planning, community-building, politics and society without ever getting preachy or trite. It's David Simon doing what he does best and few other writers even attempt to do: telling the real story of people trying to survive. It is available now in the UK (DVD, Blu-Ray) and USA (DVD, Blu-Ray).
Posted by Adam Whitehead at 12:22

Email ThisBlogThis!Share to TwitterShare to FacebookShare to Pinterest
Labels: david simon, hbo, show me a hero