Years after the collapse of civilisation in the great resource wars, former cop-turned-survivalist Max Rockatansky is headed for the Plains of Silence in his trusty car, the Interceptor. He runs afoul of Scabrous Scrotus, the ruler of Gastown and son of Immortan Joe, who steals the Interceptor - after Max stabs him in the head with his own chainsaw - and leaves Max to die. Max is rescued by Chumbucket, a maverick and zealous engineer-priest who believes that Max is "The Saint", a holy figure who will save the world using an amazing car that Chumbucket has been building for years, the Magnum Opus. Max reluctantly takes on the mantle of the Saint so he can find and defeat Scrotus and reclaim his Interceptor. 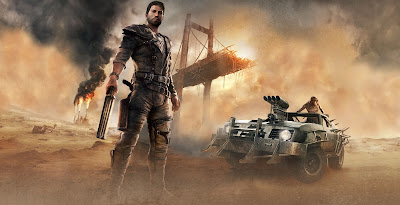 Given that the Mad Max franchise has been around for almost forty years, it's surprising that it hasn't been the inspiration for a good video game before. There was one previous attempt, a rather poor action title released in 1989, but that's it. This game is very different. It's a huge, sprawling open-world game combining an intricate third-person fighting system with vehicular combat, held together by a typically Mad Max-esque story of revenge and heartbreak.

Mad Max: Confusingly Lacks a Subtitle was created by Avalanche Studios, the team behind the Just Cause series. They know a thing or two about creating massive open-world games featuring lots of action and explosions, and the DNA of the Just Cause games can be seen in Mad Max. However, this is more than just a reskin. They very cleverly repurpose elements from those earlier games to the Mad Max universe and create a title that is very much a worthy addition to George Miller's post-apocalyptic franchise. Miller's own relaxed attitude to canon means that there isn't a huge effort made to fit the game into the existing storylines, but it can be said to take place between Beyond Thunderdome and Fury Road without too many difficulties (and the presence of Gastown and a brief appearance by Immortan Joe ties it more into the latter).

The massive map is divided into several territories, each controlled by a major character: Jeet, Gutgash, Pink Eye and Deep Friah. Each warlord is subservient to Scrotus and keen to help Max bring him down. Max has to do missions for each leader to progress the main storyline, but can also do a lot of side-missions and optional activities (such as racing or exposing hideouts of the pirates of the wastelands, the Buzzards) or just cause mayhem for Scrotus by destroying his camps, tearing down his "scarecrow" map markers, ambushing convoys and assassinating the snipers he has set up at strategic locations across the map. There's also some pleasing Mad Max-style lunacy in that you can also clear minefields using your mine-detecting dog (!). In terms of game structure, there's more than a whiff of Assassin's Creed and Far Cry to it, even down to the use of a mechanism to allow you to spy out surrounding regions. Rather than radio towers, you instead have to float a balloon (!!) above the landscape and use your binoculars to identify points of interest. The game's combat system, which is robust and crunchy, is heavily influenced by the Arkham games and Shadows of Mordor and relies on a steady progression of blocks and counter-punches. 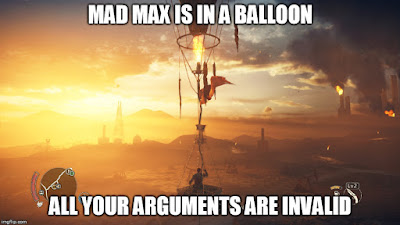 Mad Max: No Colon Here is tremendous, unmitigated and unrelenting fun. These kind of open-world games are starting to become a little repetitive, with everyone just copying the Ubisoft model (including Ubisoft themselves) to the point of boredom, but Mad Max just ditches a lot of the more tedious busywork and brings a lot of fun to proceedings. The game lets you engage in combat on foot or with your vehicle, the Magnum Opus, which starts off being a bit slow and unimpressive but by the end of the game has become a powerful death machine complete with rocket launchers, side-mounted flamethrowers and a grappling hook that can attach itself to both people and enemy towers to destroy them. Collecting scrap (the game's currency) allows you to unlock an absolutely massive array of upgrades for both Max and the Opus, with a huge degree of customisability.

The game is enormous. Focusing on the core storyline alone, you could probably put the game away in about 20 hours. However, I also decided to completely liberate one quarter of the map (which took 10 hours by itself), unlocked all the balloon rides and did all of the factional side-missions, as well as dozens of races and other optional elements. I eventually finished the story at the 32 hour mark, but completing everything outstanding in the game would easily have taken at least a couple dozen more hours. Pleasingly, it's a huge game but also one that allows you to push on to the end of the story once you start getting bored of it.

What is remarkable for a game of this size is that it is hand-crafted. Just Cause 2 used a lot of procedural generation for its enormous map and many of its enemy bases were interchangeable, with very similar layouts. Mad Max's outposts are all intricately detailed. Completing each outpost (you have a separate counter for each one, telling you if there's still stuff to do there) takes a lot of time in combat, exploration, looting and resupplying: you have to keep the Opus fuelled up and Max in supplies of water, which adds some tension to the opening hours of the game but later on is almost negligible thanks to character upgrades. 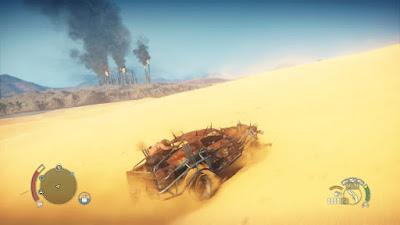 Graphically, the game isn't cutting edge but still looks impressive, especially the frequently-beautiful environmental effects and skyscapes. Having a map of this size as just wasteland sounds boring, but Avalanche carefully sculpts each region to make it stand out, whether it's a network of deep canyons or the bleached remnants of a dried-out seabed or an actual Sahara-style desert or mountainous badlands. Avalanche get a surprisingly huge amount of variety out of what sounds like a limited premise.

The game is brilliant fun to play, dialogue is sharp and true to the movies and you get a huge amount of game for your money. There are a few negatives, however. The storyline is fairly bare-bones and not always gripping. The Mad Max films are all fairly minimalist and restrained in exposition and background, but you're only spending two hours with each movie. With this game easily taking over 50 hours for completionists, a bit more engagement with the world would have been nice. Also, whilst Avalanche go to enormous lengths to make each one of the hundreds of locations in the game unique and interesting, repetition does eventually set in. The same problem as the Just Cause games - that the game may be a bit too big - does start creeping in towards the end.

The biggest surprise of the game is how true it is to the cynical nature of the films. In a few moments they look like they're going to cop out and turn Max into a hero but they always hold back and keep him more the character we all know. Max isn't always very likable in the game, which is definitely true to the movies but some people may find controlling what is a really an antihero for the length of the game to be wearying.

Overall, though, Mad Max (****½) is the most unexpectedly enjoyable game I've played in a long time. It's the best video game version of a movie series since the iconic Chronicles of Riddick: Escape from Butcher Bay back in 2004, will consume a lot of your time and ties in very well with the style and tone of the film. It is available now on PC, X-Box One (UK, US) and PlayStation 4 (UK, US).
Posted by Adam Whitehead at 20:15