Rick Grimes and several of his fellow survivors are imprisoned in Terminus, a society of cannibals. They seek to escape whilst several of their friends, such as Carol, attempt a rescue. At the same time Beth finds herself a reluctant guest of a hospital in Atlanta. Out in the woods, a frightened priest cowers in his church. But the survivors now have a promise of salvation, a cure for the Turn, which calls them to Washington, DC...if they can survive. 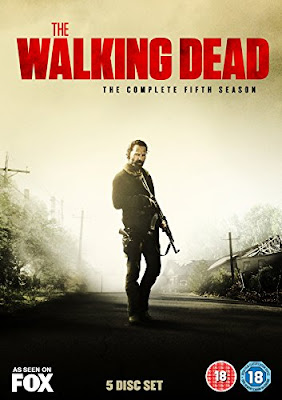 The Walking Dead reaches its fifth season, in which everything is awesome and our heroes are happy and smiling. Or maybe not. The season opens with our heroes prisoners in a cannibal stronghold before joining forces with a priest losing his faith and ending with them deliberately traumatising a peaceful community into accepting them as their new protectors. Along the way several major characters die for no immediately-discernible reason and the writers tease the audience with the possibility of some kind of actual over-arching storyline with a firm resolution in mind before snatching it away, leaving both characters and viewers with no hope and to wallow in misery.

Or to put it another way, welcome to another season of The Walking Dead, y'all.


George Romero - someone who knows a thing or two about zombies - once called The Walking Dead a "zombie soap". He's not wrong. That's not a criticism, because Robert Kirkman also called the story that of a "zombie movie that never ends". Week in, week out, month in, month out, on screen, in the comics and in the video games, people tune into the next instalment of this story which tries to make a strength out of the fact it has no end, no master plan and no planned resolution.

This sense of an ongoing narrative works in soap operas, however, because of the shifts in tone. Yes, characters get divorced, get into fights, occasionally die, but they also get married, fall in love and have moments of real happiness. The Walking Dead's biggest problem has always been its nihilistic streak, that the world is full of misery and pain after the Turn and that both the walkers and other people are dangerous and out to kill you at any given moment and every day is a remorseless, never-ending struggle to feed yourself and your family, to avoid injury and disease, and to find shelter and ammo. Other TV shows embrace the darker side of life, but lighten things with moments of genuine humanity (like The Wire, whose cast The Walking Dead continues to pilfer for new roles), occasional comedy (Breaking Bad) or hope (Game of Thrones). The Walking Dead does this only very, very occasionally, which makes it a harder show to watch. It's the ultimate example of "grimdark" on television, with the strengths and weaknesses of that movement.

Season 5, like the past two seasons, attempts to overcome one of its biggest problems - the inability to sustain a narrative over 16 episodes - by dividing the season into two halves. The first half sees our heroes at their lowest ebb in Terminus, but they also have the hope of a cure and an endgame in mind. This ultimately proves a blind alley which is deeply frustrating, but perhaps true to the show's basic premise. Finding a cure for the walkers would, ultimately, feel like a cheap way of ending the series, even if it did provide some kind of upbeat resolution. 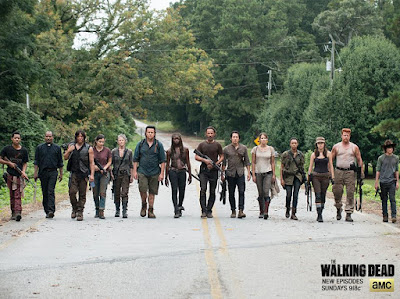 The first half of the season is a mixed bag. Our heroes spend way too much time hanging around in a church and the enemies they face from Terminus are characterless ciphers. There's a very half-hearted attempt to inject pathos by suggesting these people were once as good as Team Rick, but turned evil after meeting some bad people. But they never really follow up on it in enough depth to justify the sheer depravities they resort to. This part of the season also makes an ill-considered choice to use fractured, non-linear storytelling, moving from place to place, reversing back in time to fill in back story and accelerating forward again. Non-linear storytelling is a great device when handled well, but The Walking Dead uses it instead in this instance as a way of annoyingly retconning storylines and engaging in cheap emotional manipulation (when Person A was about to die and you thought Persons B and C were miles away, but it turns out in a flashback that Persons B and C were miles away hours earlier, and are now ready to save Person A). It also allows them to pad out the story with filler episodes in which not much happens. The Walking Dead TV show has always been far superior at characterisation than the comic books, and sometimes its use of quieter episodes to expand on character is effective. In the first half of Season 5 it never really works, however.

Once the show returns from its mid-season break, it regains a sense of momentum. Our heroes arrive on the outskirts of Washington, DC (those expecting some great shots of an abandoned Mall won't get them: the show's relatively low budget is never quite as painfully obvious as this season) and find a new safe haven, Alexandria. This results in a much more engaging storyline in which our heroes are presented as the unsafe invaders in a peaceful and stable community, Rick's ruthless pragmatism presented as cynical selfishness and maybe even outright villainy by the existing community leaders. This idea of turning Team Rick into the bad guys has always been an ace in the show's hole and their employment of it is well-assured, accompanied by some excellent performances. However, the show presents even this storyline with the training wheels still on. The revelation of a new group of bad guys who employ tactics far worse than anything Team Rick have done; some of the people in Alexandria turning out to be cowards and murderers; and the Alexandrians genuinely not having a clue about the world outside mean that our sympathies remain firmly lodged with Team Rick throughout. When offered a chance to make a genuinely interesting point on morality, The Walking Dead shrugs and keeps walkin' instead.

Still, The Walking Dead's primary strengths remain intact: some excellent actors, fantastic prosthetics work and some outstanding moments of cinematography and framing of shots. On a moment to moment basis, the show is mostly watchable and there are some outstanding action scenes. Carol (Melissa McBride) remains the best performer on the show, with some brilliant scenes and the opportunity to channel her inner soccer mom in the concluding episodes. She also gets most of the best lines. Many of the other actors also do quality work. But the sense remains that the show needs more of a sense of an endgame and more of a direction to the story. A zombie soap is great fun, there's only so long that it can keep doing that and remain fresh.