Major DOCTOR WHO revamp on the way

British tabloid newspaper The Mirror is hardly a bastion of reliability, but its entertainment sources are usually pretty good. This week The Mirror has been reporting on large changes coming to Doctor Who. 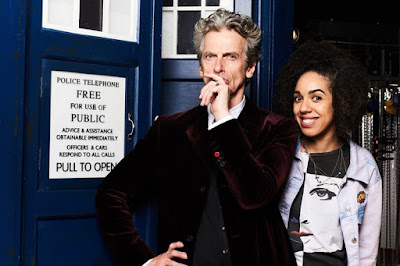 Doctor Who returns to our screens next month for a Christmas special, followed by a season of new episodes in the spring, possibly March or April. This season - the 10th since the show's return in 2005 and the 36th overall - will also be the last to be helmed by Steven Moffat, who has been in charge of the series since Russell T. Davies departed in 2010. Peter Capaldi returns as the Twelfth Doctor and Pearl Mackie will be introduced as the Doctor's latest companion, Bill.

According to The Mirror, the BBC is planning major changes after this season. Chris Chibnall, a former Doctor Who and Torchwood writer better-known these days for working on Broadchurch (the third and final season of which will air next year), will be taking over as showrunner from the 11th/37th season in 2018. According to the reports, he will be ditching the Bill character immediately (which seems a bit harsh, but follows in the Davies tradition of having only one companion/Doctor combo per season) and replacing her with a new character. More importantly, that season will also allegedly see Peter Capaldi being replaced by a new Doctor.

According to the report, the BBC wants a complete revamp and reboot of the show, apparently unimpressed by declining merchandise sales and lengthy periods where no new episodes air. They want a return to 12-13 episodes per year, airing in the same slot, believing this predictability helped give the show its cachet and popularity during the David Tennant years (as well as, y'know, David Tennant).

Given the future of the show was in question a couple of years ago, it's heartening to hear (even if not confirmed) that the BBC is committing to the show's future. It does feel a little disingenuous of the BBC to be blaming the show's intermittent scheduling as a problem when it's the BBC's own budget crisis that caused and mandated it in the first place though.

If the story is true, it'll be interesting to hear if Capaldi has chosen to go - which is quite possible - or if he's been encouraged to leave by the BBC so they can cast a younger actor. If the latter is the case, it will be annoying as Capaldi's performance has been absolutely splendid.

We should learn the truth next year.
Posted by Adam Whitehead at 18:33

Wild rumors! Moffatt earlier said something to the effect of "it looks like I won't be writing a regeneration scene" for the Twelfth Doctor. So if these rumors are true, the Christmas special for 2017 would be Capaldi's last one?

They wouldn't have a problem if they hadn't wasted so much money making the wretched and unasked for Class. They can dump that for a start. Getting rid of Capaldi would be totally unfair. What they need desperately are some clever scripts that actually make sense, instead of ones wrapped up in their own smugness. - Ian

Dang, I was hoping it would end.