Legendary Entertainment has picked up the film and television rights to Frank Herbert's classic 1965 SF novel Dune. Previously, Paramount Pictures had an option but that lapsed several years ago. 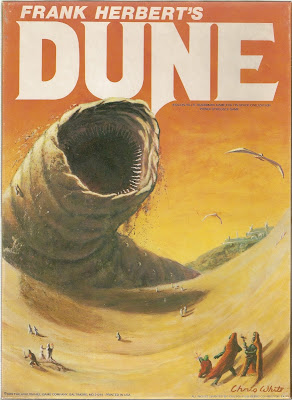 Dune has been filmed several times before. In 1984 David Lynch released a very weird and stylised take on the film, whilst in 2000 and 2003 the Sci-Fi Channel (now SyFy) released two mini-series that adapted both Dune and its two sequels, Dune Messiah and Children of Dune. Oddly, the franchise has had much greater legs in video games, with several popular titles released based on the books.

The rights were let by the Herbert Estate with Frank Herbert's son Brian involved as a producer. It is unclear if the rights are for just Dune or also its five canonical sequels. Brian Herbert and Kevin J. Anderson have also released an interminable series of terrible prequel and sequel novels to Frank's work.
Posted by Adam Whitehead at 21:25

Finished reading Dune a few months back and watched some of the old film. Hopefully updating it does it justice.

The Sci Fi miniseries at least held to the book's overall plot (it just looks like they made it for about $20 and a bus token).

I think a better plan would be to make a trilogy: split Dune in half for the first two films (as there's a pretty significant time skip partway through the novel) and finish with Dune Messiah. After that they could see how they're doing and re-evaluate where to go next.

While I like the David Lynch Dune movie, it seems more inspired by the book than a real adaptation of it. Of course what do you expect from the director of Eraserhead?

Dune is one of my all time favorite SF/ Fantasy novels. Unfortunately, for me the the sequels mainly demonstrate that the first book was a fluke.