Dunk & Egg heading back to comics

Dunk & Egg, the stars of George R.R. Martin's Song of Ice and Fire prequel novella series, are heading back to comics. Bantam Books will release a graphic novel version of the third story, The Mystery Knight, next year. 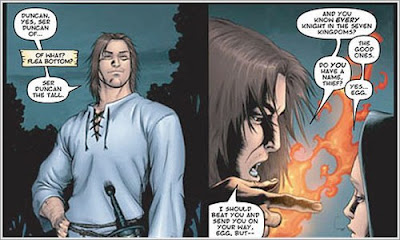 Dunk and Egg's adventures start eighty-nine years before the events of A Game of Thrones, during the reign of King Daeron II Targaryen. Dunk is a hedge knight who is reluctantly drawn into the orbit of the Targaryen royal family when a royal prince, "Egg", is given to him as a squire. They travel the Seven Kingdoms, with Egg's true identity kept a secret, getting involved in various scrapes. The first two novellas, The Hedge Knight and The Sworn Sword, are both available as graphic novels.

I worked on The Sworn Sword adaptation in a minor capacity, detailing geographic and location descriptions to help the artist.

Mike S. Miller is returning to provide the artwork for the new adaptation, which will be released on 4 July 2017.

Those looking for the prose version of The Mystery Knight can find it, along with its two forebears, in A Knight of the Seven Kingdoms. George R.R. Martin has two more stories in the planning stages, with the working titles The She-Wolves and The Village Hero, but will not work on either until The Winds of Winter is completed.

Over at Atlas of Ice and Fire, I'm just about to reach the same time period in the cartographic history of the Seven Kingdoms.
Posted by Adam Whitehead at 12:53

Email ThisBlogThis!Share to TwitterShare to FacebookShare to Pinterest
Labels: a knight of the seven kingdoms, atlas of ice and fire, dunk and egg, george r.r. martin, news, the mystery knight