Ragnar Lothbrok is now Earl of Kattegat and a vassal of King Horik. They combine their forces to wage war on Jarl Borg, who is allied to Ragnar's brother Rollo. After fighting to a standstill, Ragnar proposes they mount a new alliance to invade Northumbria in England and seize land there. Ragnar reluctantly allows Rollo to return to Kattegat and spends the next four years preparing his forces. When the time comes, Ragnar and Horik betray their word and invade England without Borg, but are blown off-course and instead land in Wessex, ruled by the wily and cunning King Ecbert who immediately sees opportunity with these invaders from the sea. 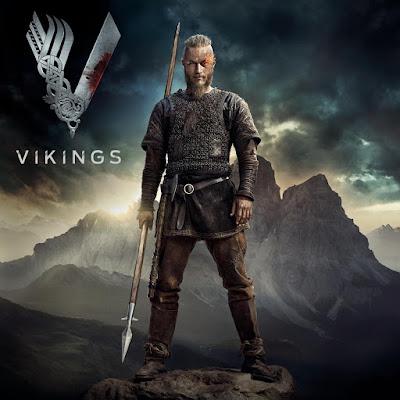 The first season of Vikings was a welcome, straightforward tale of blood, lust, cunning and surprising restraint. Although it would be difficult to call it fully historically accurate, it was far more historically accurate than any other show about the Viking Age and made a good attempt to show the full complexities of the Viking culture and the Anglo-Saxon one they came into contact with. It also channelled some Game of Thrones-style political machinations and some very well-realised action and effects scenes. It was, overall, a winner.

Season 2 is, if anything, better. It opens up the world a little, bringing in the other Anglo-Saxon kingdoms of Wessex and Mercia and delves deeply into the psyches of the core cast of characters: Ragnar, Lagertha, Aslaug, Rollo, Floki, Athelstan and the now-grown-up Bjorn, as well as developing some minor characters from Season 1 (Horik and Borg) and introducing a major new player in the form of the canny Ecbert. Actors both established and new do exceptional work, especially English actor Linus Roache, who portrays the ambitious King Ecbert of Wessex with intelligence and off-beat candour. George Blagden also levels up as Athelstan, who's conflict of faith and culture is played to the hilt and done incredibly well.

The show moves between several long-running storylines, mixing up Ragnar's ambitions on the home front (which Donal Logue's brilliantly-played Horik is increasingly wary of) with his desire for conquests in the west but also his deep-seated longing for family, good earth and to live in peace. Ragnar's preference for negotiation before bloodshed marked him out as a different kind of Viking in the first season and that continues in the second, particularly his relationship with Ecbert, the first opponent that Ragnar has met who is as cunning and clever as he is (despite Ecbert's curious obsession with holding every major diplomatic meeting in a communal bath). Elsewhere, Lagertha's attempts to step out of Ragnar's shadow are compromised by her political decision to marry another jarl which backfires when he turns out to be a violent and abusive imbecile. Lagertha, as to be expected, does not take well to this and soon is setting up her own grab for power. This ties in with young Bjorn, who refreshingly doesn't hate his absentee father or deify him, but instead treats him with cautious respect as he tries to figure out who he is.

Vikings therefore has evolved into a curious hybrid of family drama, history lesson, political potboiler and all-out action story. There are several major battles (and lots of smaller skirmishes), some of which are very impressive indeed, but the writers are more interested in this band of characters, some historical, some legendary, some brand-new but all fascinating, flawed and human.

Flaws? Well, watching manly men with swords pledging brotherhood and alliance and knowing they'll be turning on each other in a couple of episodes time risks feeling repetitive, but this does set up some last-minute plot twists that are well-handled. The growing sense of scale can also feel like it trivialises what were once epic and dangerous quests, with Ragnar and his men shooting back and forth over the North Sea like they're taking a brief stroll when it was a major life-threatening voyage in the first season (although that was probably true to the actual historical experience as well). There's also some very oddball historical inconsistencies: Ragnar and his men accidentally land in Wessex without knowing it's there and they don't seem to know about France just across the Channel, despite Ecbert waxing lyrical about Vikings visiting the court of Charlemagne five minutes earlier. But these are fairly minor.

Season 2 of Vikings (****½) is a gripping and enjoyable continuation of the first season and well worth a watch. It is available now on Blu-Ray (UK, USA) and DVD (UK, USA).
Posted by Adam Whitehead at 19:42