Emilia Clarke has been cast in the new Star Wars spin-off movie about Han Solo. 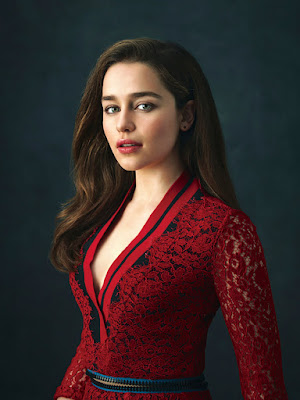 The actress, best known for playing Daenerys Targaryen in Game of Thrones and Sarah Connor in last year's disappointing new Terminator movie, Genisys, joins announced castmembers Alden Ehrenreich as Han Solo and Donald Glover as Lando Calrissian. Her role in the film is not known.

The Han Solo movie will be the second stand-alone spin-off Star Wars movie, following on from next month's Rogue One. It will start filming in January and is currently slated for release on 25 May 2018, although that is subject to change. It will be directed by Phil Lord and Christopher Miller (Cloudy with a Chance of Meatballs, 21 Jump Street, The Lego Movie) and may be the start of a trilogy covering Han Solo's life leading up to the events of A New Hope.
Posted by Adam Whitehead at 21:47

Of all these new Star Wars movies, I'm only interested in Rogue One. Episode VII was a a bust.

Hopefully this is her breakout movie role after the disappointing Terminator. A lot will depend on her role and how well/badly Rogue One do next month.