AD 2552. The Pillar of Autumn, a United Nations Space Command capital ship, is fleeing the fall of the human colony world of Reach to the Covenant, a hostile alliance of alien races. The Pillar has tracked Covenant intelligence leading to a remote star system. Upon arrival they find a massive ring, ten thousand kilometres across, with a habitable biosphere. Crippled in combat, the Pillar sets down on the object and it's up to the only specially-trained Spartan soldier on board, the Master Chief, to discern the origins of Halo and why the Covenant hold it in such reverence. 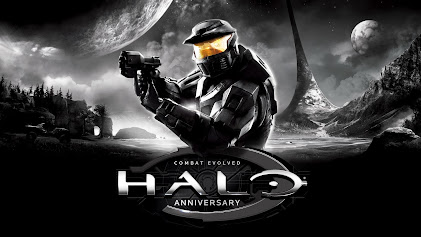 Halo: Combat Evolved was originally released in 2001 as the signature game of the original Microsoft X-Box game console, as well as the first game in the expansive Halo franchise, which has expanded to seven main-series games, three major spin-offs and numerous novels and comic books, as well as an upcoming TV series. It's always been an interesting anomaly that such an enormously popular franchise has expanded from such mixed beginnings.

This Anniversary Edition of Halo was released in 2011 to celebrate the franchise's tenth anniversary and was re-released in 2020 as part of the Halo Master Chief Collection on PC. Remasters of this kind are always controversial, since they sometimes alter and adjust the original game's level design and aesthetic. To be frank, in the case of Halo, I was looking forwards to some changes to the game's design, which have not only aged well, but were pretty poor going even in 2001. Alas, the remaster has stuck extremely close to the original game design, replicating its flaws as well as its strengths.

On the plus side of things, Halo has some very nice environments. The first third or so of the ten-hour game features entertaining outdoors combat on islands, in valleys and on grasslands, sometimes featuring vehicles with multiple crewing points and some pretty solid friendly AI. This is easily the best part of the game and, combined with the game's robustly entertaining multiplayer mode and some very strong multiplayer maps, is where the game's reputation mostly comes from. The graphics for this part of the game have been updated nicely, particularly the vast vistas showing Halo's interior structure rising up in the distance and then up overhead. Combat is reasonably solid and the Covenant enemies are reasonably intelligent and challenging (even if the monkey-like, comedic Grunts are far more irritating than genuinely threatening, but the Elites and Jackals make up for them).

In terms of the campaign mode, this enjoyable part of the game is sadly brief. After the opening levels you have to descend into the bowels of Halo and the game never really recovers after this point. The subterranean levels are mind-bogglingly repetitive on a scale that, over the years, I'd come to believe I had exaggerated in my mind. Replaying the game I discovered that no only had I not exaggerated them, I'd undersold them. You spend hour after hour making your way through identical rooms to flip a switch, then backtrack through these identical open rooms to the area you just unlocked, which consists of another series of rooms identical to the ones you just passed through. When this Groundhog Day section ends you find yourself in a large, temple-like structure having to do the same thing again, this time through much bigger rooms and with approximately four trillion, considerably less intelligent and interesting enemies chasing you: the Flood. The Flood are a not-very-well-disguised (and very much less entertaining) version of the Xen aliens from Half-Life, using small creatures to "zombify" enemies and turn them against one another, and are simply tedious to fight, since they just run at you and never use the more advanced tactics and AI of the Covenant enemies.

It's always been a mystery as to why Bungie made almost two-thirds of the game so repetitive and tedious as to at times feel almost miserable. The original X-Box had severe memory limitations, but that didn't stop them making the opening third or so of the game much more varied and entertaining. I suspect time was to blame and faced with critical deadlines, they just designed two areas and copy-pasted them to make larger areas. This is not unusual in gaming, but it's interesting that Dragon Age II - a later game that had the same problem but made up for it with a reasonable well-executed main storyline with a larger cast of more interesting characters - was criticised for it when Halo seems to have been given a pass for it.

A counter-argument is, of course, that Halo's campaign is really there as practice and warm-up for the multiplayer mode, which remains robustly entertaining (although perhaps a bit pointless; Halo 3, 4 and Reach have stronger multiplayer combat). Halo's story is pretty barebones in this first game and it was really only with Halo 2 that the storyline and characters started being fleshed out in much greater detail, giving rise to the popularity of the franchise.

As it stands, Halo: Combat Evolved Anniversary (**½) is best experienced as a historical curiosity. It's not completely unplayable and the remaster adds a nice sheen to the graphics and some cool new backdrops, but doesn't solve the original game's severe problems with level design. It's certainly not aged half as well as Half-Life, the recent Black Mesa remaster of which is much stronger.

The game is available now on X-Box One and PC as part of The Master Chief Collection, which also includes a remastered version of Halo 2 and graphically-updated versions of Halo 3, Halo 3: ODST, Halo: Reach and Halo 4.