RUMOUR: Harlan Ellison's LAST DANGEROUS VISIONS may be coming out

In a series of recent tweets, SF TV author J. Michael Straczynski has confirmed that he is acting as the literary executor of the Harlan Ellison Estate. In a series of tweets this week, he has hinted at a new project that will be seeing the light of day soon, and promised to reveal what this would be in a series of five messages. The third was released today and seem to indicate what the project will be: The Last Dangerous Visions, the single most-delayed book in the history of science fiction and fantasy. 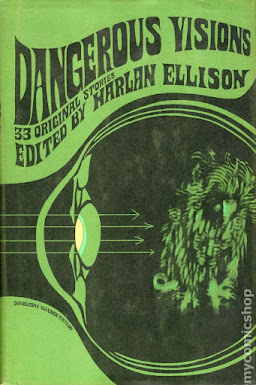 Harlan Ellison released the short story anthology Dangerous Visions in 1967. A groundbreaking work, it won multiple awards and helped define the New Wave of late 1960s science fiction. The book included work by Harlan Ellison, Robert Silverberg, Philip Jose Farmer, Miriam Allen deFord, Brian W. Aldiss, Philip K. Dick, J.G. Ballard, John Brunner and Roger Zelazny.
The book was succeeded in 1972 by Again, Dangerous Visions, which was almost as acclaimed. Ellison began collecting a third anthology, The Last Dangerous Visions, planned for publication in 1973. Faced with the task of exceeding the previous two collections, Ellison became obsessed with the book being "perfect" and constantly tinkered with it, soliciting new stories, removing old ones, seeking out new authors and so on. In 1979 Ellison projected the book coming out in three volumes and incorporating some 113 stories by 102 authors. Thirty-two of the stories were eventually withdrawn and published elsewhere; eight others listed on the 1979 list did not appear on later contents lists issued by Ellison.
Fascination with the book peaked in the late 1990s, when Christopher Priest issued a critique of the lengthy delays to publication under the title The Book on the Edge of Forever. By this time several prominent SFF authors included in the collection had died, and their stories in the collection are among the last unpublished, complete work they left behind.
Ellison would occasionally mention the project as ongoing even in the 2000s, although it was generally regarded by that point that it would never come out. Ellison's death in 2018 would seem to have been the final word on the subject, despite the fact that the material still appeared to be extant in his archives.
Straczynski's tweets may end up being about something else, but given the three words released so far - THE LAST DANGEROUS - it's hard to see what. We'll find out for sure tomorrow and Friday when the announcement is completed, but for now it looks like, after forty-eight years, we'll finally see what Ellison was preparing.
Posted by Adam Whitehead at 00:17

Peak interest was somewhat earlier than the "late 1990s". Chris Priest first published his critique as The Last Deadloss Visions (issue 5 of his then fanzine Deadloss) at the 1987 UK Worldcon. This saw various revisions with added material -- mostly letters from readers, including LDV contributors -- and a new edition as The Book at the Edge of Forever from Fantagraphics Books in 1994, which was a Hugo finalist in 1995 but did not win.

Very, very interesting, i havent known anything about this until your post but this is potentially the new book for me. Straczynski is the right man for the job in my opinionm his body of work speaks for itself. Ill be looking at the developing story with interest.

some enterprising publisher needs to do a 5 volume box set of the full series . The first two collectiosn were excellent, and despite some dating on a few , still remain largely fresh to a new reader