2370. The Federation's attempts to help the planet Bajor recover from Cardassian occupation are strained when civil war threatens the planet and religious turmoil surrounds the election of a new spiritual leader. Whilst Commander Sisko and his crew attempt to navigate through tricky waters, a new Federation-Cardassian treaty has left colony worlds of each power in earth other's space, resulting in the rise of new tensions and a freedom fighting group, the Maquis. Meanwhile, the exploration of the Gamma Quadrant beyond the wormhole proceeds apace and the Ferengi become the first power to forge trading alliances with worlds there...only to learn of the existence of something called "the Dominion," which is not happy about the influx of new traffic into their space. 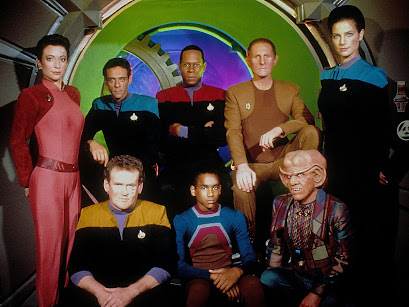 The first season of Deep Space Nine was reasonably entertaining, if not the most exciting collection of episodes in the franchise's history. The writers didn't seem entirely sure on the new show's tone and direction to start with and relied a little too heavily on bringing in Next Generation characters and ideas. Towards the end of the season, however, they decided to focus more on their own characters and premise, resulting in several excellent episodes (especially Duet).

Season 2 opens with the same confidence in their own skills on full display. For the first time ever in Star Trek's history, the season launches with a three-part story that delves deep into Bajoran politics and conflicts. It's a great story that uses the show's recurring cast - Dukat, Winn, Bareil - to best effect, but it's also a solid worldbuilding exercise for Bajor and has some great action beats (even if an atmospheric dogfight between Bajoran fighters is a little too ambitious for the effects technology at this point). It also has a very impressive main guest star in Frank Langella (Frost/Nixon), who makes for a formidable antagonist.

The season has more than a few great episodes: Cardassians, The Wire, The Collaborator and Tribunal feature solid stories about the Occupation and its aftermath, providing great acting opportunities for the regular and recurring cast. Particularly, Andrew Robinson's Garak goes to incredible strengths and becomes arguably the best actor on the show, although he's given a run for his money by the likes of Marc Alaimo, Louise Fletcher, Nana Visitor and Rene Auberjonois.

Also outstanding is Sanctuary, where the Bajorans have to grapple with ethics and morality when they are asked to help a race which has suffered as much as they have. Whispers is an excellent character piece, focused entirely on O'Brien as the world around him goes strange and he has no idea what's going on. Armageddon Game is a great show about politics and perception, furthering the Bashir/O'Brien bromance in the process. Profit and Loss is a great Quark show, depicting more sides to the character than previously seen (as well as Garak). Blood Oath is an exceptional episode bringing back three key Klingon characters and actors from the original series in an action piece that also demonstrates Dax's involvement with the Klingon Empire (foreshadowing the later arrival of Worf). The Maquis is a great two-parter about how signing a peace of paper doesn't magically solve problems on the ground. Crossover begins the show's long-running flirtation with the Mirror Universe, featuring some great alternate roles for the actors to inhabit (Nana Visitor in particular). 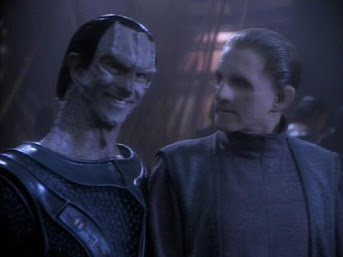 The outstanding, best episode of the season is Necessary Evil, a lengthy flashback episode to the station's days under Cardassian occupation, where rejected scientific curiosity Odo is forced against his will by Gul Dukat to conduct a murder investigation. It's a moody, terrifically-written piece which sees the station's sets adjusted in a manner that makes them hellish and sees amazing performances by everyone involved. It also explains why Odo was allowed to retain his job on the station and why more than a few Bajorans (particularly Kira) are prepared to stand up for him despite him being, on the surface, a collaborator or at least an enabler of the Cardassian regime.

Rules of Acquisition is a solid Ferengi episode and marks the beginning of Deep Space Nine's long-running project to redeem the species. The "lol, misogyny" aspect of their Next Generation appearances starts its long road to being discarded here, and it's amusing to note in retrospect that it's one of Star Trek's most underrated races which first becomes aware of the Dominion, who will come to dominate almost the rest of the show's run.

Other episodes have strong central ideas but don't really take off: Invasive Procedures wants to be a deep-rooted Trill drama about stealing Dax's symbiont, but can't really do the idea justice. Melora wants to say something about disability, but because the main character's disability is self-chosen and temporary, it doesn't really track. Second Sight wants to be a love story for Sisko, but goes off in a very weird "Star Trek hallucination...or is it?" direction that becomes a bit tedious. The Alternate starts off as a welcome piece of backstory exploration for Odo, as we meet the Bajoran scientist who raised him, but the episode refuses to make him really culpable for the pain he inflicted on Odo in his experiments and then goes off on a completely wild monster hunt tangent that feels incongruous at best. Paradise is a very interesting "back to basics" story about a Federation colony that has reverted to a hunter-gatherer level, but what seems to be an idyllic existence is rapidly exposed as a tyranny. This feels like DS9's first brush with dealing with oppression and bigotry (especially the scene of forcing Sisko into a punishment box), but it never really gets to grips with what it wants to say, especially compared to later episodes like Far Beyond the Stars. 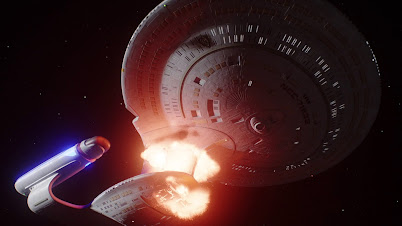 There are a few more episodes that fit into the "okay" category: Rivals has promising ideas about a rival to Quark from the same species as TNG's Guinan who uses his powers for personal gain, but gets mixed up with alien devices that alter the laws of probability (possibly inspired by The Hitch-Hiker's Guide to the Galaxy). The episode is entertaining, but doesn't make the most of either possibility. Shadowplay is a nice mystery story about a village whose people are disappearing one-by-one. The resolution is quite good and there a nice subplot about Odo bonding with a young child, but it's not the most dynamic of episodes. Playing God has the DS9 crew confront one of the most serious threats in the entire history of Star Trek and resolving it in one of the most bafflingly off-hand ways possible.

The season ends on a very strong note. The Jem'Hadar properly introduces the Dominion and two of its three main powers, the Vorta and Jem'Hadar. It also has an outstanding space battle as DS9's runabouts and the Galaxy-class USS Odyssey join forces to take on a Jem'Hadar attack fleet, with decidedly mixed results. Amongst the explosions, the episode is also terrific for Quark taking Sisko and his stereotypical view of the Ferengi to task (the moment that Sisko realises is right and he has developed almost racist views of the Ferengi is quite impressive, well-handled by Avery Brooks and Armin Shimerman). The only downside to the episode is that the Dominion's position - they don't want people pouring into their space and colonising planets without their permission - seems quite reasonable and the Federation's response, that they're going to keep exploring the Gamma Quadrant regardless, feels off.

The second season of Star Trek: Deep Space Nine (****) shows significant improvement over the first season. The show is still not operating at the height of its potential but it's making solid progress to getting there. The series is available on DVD in the USA and UK, as well as on CBS All Access in the States and Netflix in the UK.

Note: I previously reviewed DS9's second season as part of a wider review of the first two seasons twelve years ago. That review can be read here.