Rumours are swirling that Electronic Arts is set to announce a complete remaster of BioWare's classic Mass Effect trilogy a special virtual event this weekend. 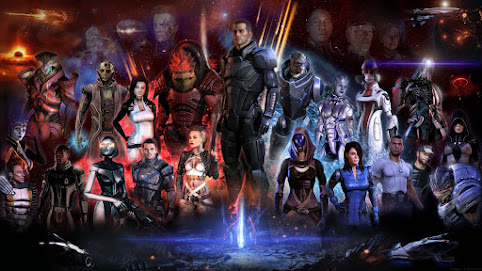 The Mass Effect series is a hybrid RPG/third-person shooter game series set in a painstakingly-detailed space opera universe. The first three games, released in 2007, 2010 and 2012, form a single epic story extending across some 65 hours of gameplay, pitting humanity and several allied races against the Reapers, an ancient race of biomechanical horrors from beyond the dawn of time. Although Mass Effect did little that was completely new - its setting borrows more than a few story and backstory plot points from 1990s space opera Babylon 5, offbeat space opera game Anachronox and BioWare's earlier game Knights of the Old Republic - it did remix standard space opera tropes in an enjoyable fashion.

The trilogy sold decently if unspectacularly, but did win critical acclaim and a legion of fans. The controversial ending to the trilogy did dent the critical appreciation of the series, but more recent reappraisals (following a series of patches and expansions altering the ending somewhat) have seen a kinder consensus emerging. An attempt to relaunch the franchise with a sequel trilogy spearheaded Mass Effect: Andromeda (2017) has had mixed results, with a highly variable critical reception and poor sales.

Reports of a Mass Effect remaster leaked a couple of years ago and a fairly steady stream of information has seeped out since then, suggesting the games will have much better graphics (PC mods have already delivered better-quality graphics for quite a few years now) and the first game in the series has been more definitively rebuilt to match the gameplay and style of the latter two. Other details are unclear, such as if it will be possible to play the three games in one seamless experience or how the third game's multiplayer features will be handled.

Other reports suggest that the remaster has been handled by a different developer working for EA, with BioWare working on saving their multiplayer shooter Anthem after a troubled launch and also working on a new Dragon Age game for release in 2022. BioWare has had a troubled few years which has seen its one-impeccable reputation severely damaged and a succession of flops (their last hit, Dragon Age: Inquisition, is now six years in the rear view mirror) leaving their long-term future in doubt if Dragon Age IV is not a success.

We'll find out if the rumours are correct on Saturday.