The Office (USA): The Complete Series

Scranton, Pennsylvania, 2005. A local PBS documentary crew start capturing the everyday lives of the workers at the local branch of Dunder Mifflin Paper Company as part of a series looking at ordinary working Americans. However, the office they choose is under the management of Michael Scott, a small man with big dreams, and increasingly befuddling behaviour of the employees leads to a documentary project that lasts much, much longer than anticipated. 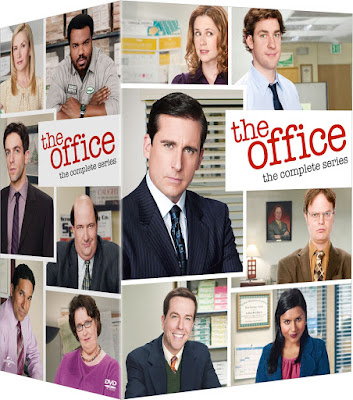 If there is an immutable rule of reality, just as inarguable as the speed of light or that every other Star Trek film is tripe, it is that British sitcoms cannot be transferred to the American market. Fawlty Towers, Red Dwarf and Men Behaving Badly were all remade for a US audience and bombed, heavily. When NBC announced in 2005 that they were remaking Ricky Gervais's breakthrough vehicle, the mockumentary The Office, for the USA, the full (and perhaps slightly smug) expectation was that it would fall flat on its face.

Of course it didn't. Ricky Gervais and Stephen Merchant's sitcom was well-suited to the transition, since sitting in a boring office working hard for poor pay is probably the most relatable and universal experience of human existence for the past seventy-five years, as true in Scranton, Pennsylvania as it was in Slough, Berkshire. Furthermore, Gervais and Merchant's work was itself heavily inspired by the pioneering mockumentary work of Christopher Guest, particularly This is Spinal Tap and Best in Show. The final piece of the puzzle was that veteran American scriptwriter and producer Greg Daniels (The Simpsons) was a good fit for taking their vision to a US market, assembling a talented group of mostly young writers and producers to help him out (chief among them Michael Schur, who would go on to create or co-create three of the greatest comedies of the 2010s: Parks & Recreation, Brooklyn Nine-Nine and The Good Place).

The US version of The Office gets off to an awkward start, with a first season that feels far too close to the British version for comfort (even down to the pilot using the same script, just slightly tweaked). The dynamics of the office are also extremely familiar, with Steve Carell's Michael Scott being well-meaning but self-unaware and prone to gaffs, Rainn Wilson's Dwight Schrute being officious, pedantic and somewhat tedious, Jim (John Krasinski) being the perennial unlucky-in-love straight man and receptionist Pam Beesly (Jenna Fischer) feel unable to escape her underachieving relationship and disappointing career path. These are pretty much 1:1 matches for the British cast of characters.

Fortunately, the American writers show increased confidence over the short first season run and things quickly improve. A big difference to the British version is that the secondary and tertiary cast of the American show is much larger and the expanded episode count gives many of them multiple episodes to shine, which makes the feeling of everyone being in an office a lot more realistic, with even the only-intermittently-seen warehouse workers receiving some development (and, in the case of Crag Robinson's Darryl, eventual promotion to the main cast).

The show is anchored in Steve Carell's performance as Scott. At first glance Scott and Ricky Gervais's David Brent are clones, but a key difference soon emerges: Brent seemed to know, albeit deeply buried underneath his bluster, that he was a small and underachieving man. Scott is much more oblivious of his failings. However, whilst Brent was also not a particularly good manager or businessman (basically coasting on his subordinate salesmen's reasonably competent performance), Scott is shown to actually be a really good salesman when push comes to shove, and although his humour is often inappropriate for the workplace, he is generally good at helping (or rather, letting through inaction) his staff deal with their various problems. Keeping this tightrope performance going is difficult, but it's impressive how Scott keeps it up for seven whole seasons (that's what she said™).

The other cornerstone of the show is the slow-burning romance between Jim and Pam, which like Tim and Dawn's relationship in the British original, is centred in their friendship and mutual desire to play pranks on Dwight but gradually becomes more serious when Pam realises her current relationship is unsatisfying. The romance was so key to the British original that it wasn't really resolved until the series finale (and several attempts to revisit the show have foundered because of the dubious decision to focus on David Brent alone, not the rest of the cast), but fortunately (since it would have gotten maddening otherwise) the US version of The Office pushes the button on it by the end of Season 3 and then spends a six further seasons exploring the development of the romance, with marriage and kids following. This risks being twee, so it's a welcome surprise when the writers show the relationship has its ups and downs, with a realistic complication introduced in the final season when Jim gets the opportunity to follow the job of his dreams in Philadelphia but Pam is less willing to uproot their family. This ends up being one of the best explorations of a long-term romance in television history, avoiding the problems that a lot of shows have when the "will they/won't they" tension is resolved.

The other castmembers all get their time in the sun, but the show does have one major fly in its character roster: Andy Bernard, played by Ed Helms. Andy joins the cast in Season 3 as one of a "new intake" of workers from another branch which is absorbed into Scranton and is initially presented as hyper-competitive and unpleasant with an anger management problem. This appears to have been down to the original plan being to keep the character around in a short-term recurring role and then get rid of him, but Ed Helms' huge success in the Hangover movies caused a rethink. Andy went off to anger management therapy and came back a changed man, a relatively nice (if low-key) guy with a sideline in singing and playing banjo. In fact, he's a bit of a sap, and in a supporting character role that's vaguely amusing and sometimes sympathetic (even if his on-off again romance with receptionist Erin - Unbreakable Kimmy Schmidt's excellent Ellie Kemper - is astonishingly dull) that's absolutely fine. Unfortunately, in Season 8 it appears that Helms (or his agent) leveraged his movie profile to get him promoted to replace Steve Carell as the show's star, which is when the wheels of the series not so much come off as are ejected with terrifying explosive force and the directionless remnants are allowed to crash into the ground and explode. Fortunately, Helms was called in to make The Hangover 3 and is missing from more than half of the final season, allowing the show to regain most of its former quality.

The Office (USA) is an inconsistent show, sometimes maddeningly so. Its initially rocky first season, when it is too much in the shadow of the British original, soon expands into an "imperial period" of quality in Seasons 2-4 that can withstand comparison to the best seasons of any other show. There's then a three-season slow decline to the end of Season 7, during which time the show is still certainly watchable with some absolutely outstanding moments and individual episodes but also a lot of wheel-spinning, and then Season 8 is dreadful, despite the heroic efforts of recurring guest stars James Spader (who can be hilarious but his character has been teleported in from a completely different universe) and Catherine Tate, but there's a marked return to form in Season 9, culminating in a genuinely effecting final run of episodes and one of the best TV sitcom finales of all time.

The US version of The Office (***½) is, at 201 episodes, a daunting prospect to watch, especially compared to the UK version's slim and breezy 14 instalments. But it's mostly worth it, with genuinely funny (if often cringe-inducing) moments and strong characterisation helping the show transition from its early, more realistic feel to the decidedly implausible plot developments of its later seasons. The cast is exemplary and, at its best, this is a show that can withstand comparisons to the greatest of all sitcoms (especially episodes like Dinner Party, which comfortably outshines anything in the British original). However, it is also inconsistent in quality over the long run, and the disappointing run of episodes late in the show's life means that it will likely be outshone in history by the shorter, funnier and much more consistent Parks & Recreation and the conceptually much bolder The Good Place. The complete series is available to watch in the UK on Amazon Prime Video. In the US it is currently available on Netflix, but will leave the service imminently in favour of NBC's new streaming platform, Peacock.
Posted by Adam Whitehead at 21:28