Bethesda Game Studios have updated their website for their forthcoming new open-world RPG, Starfield, for the first time since launching it in 2018. The update merely consists of adding newly-acquired age certificates, but this is significant and may indicate that Bethesda are planning a bigger reveal of the game later this year. 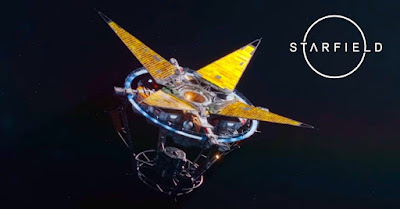 Bethesda are best-known for their two ongoing, open-world RPG franchises: the Elder Scrolls (set in a fantasy world) and Fallout (set in a post-apocalyptic setting). Starfield is significant as the first new IP launched by Bethesda since releasing the first Elder Scrolls game, Arena, way back in 1994; they acquired the Fallout IP from Interplay, who had previously produced two main games and two spin-offs, in 2004.

Bethesda have been working on Starfield since the release of Fallout 4 in 2015, although they did divert some resources and a newly-acquired team to work on multiplayer shooter Fallout 76, which was released in 2018 and has recently seen a major new expansion released. Relatively little is known about Starfield apart from a very short video showing a space station floating in space. Leaks of varying degrees of reliability suggest that Starfield will be an open-world, space opera game consisting of a space station hub, spacecraft and several different regions on several planets the player can move between (possibly similar to Obsidian's recent SF CRPG The Outer Worlds, although Starfield is expected to be much larger). More fanciful leaks suggest that Starfield is set hundreds of years in the future of the Fallout setting, although this seems less likely.


The ESRB and PEGI-18 age certifications do not necessarily mean an imminent release, as Bethesda could have used early demos and builds rather that submitting the full, finished game for certification. That said, it's unusual for certification to take place more than a year or so before release, unless there are dramatic, last-minute delays.

Bethesda have hinted at announcements later this year to lay out their plans moving forwards. Bethesda's preferred release schedule is to fully unveil their game in the spring or summer and then release the game in the autumn, ahead of the Christmas rush: Fallout 4 was announced in June 2015 and released in November that year, whilst Fallout 76 was announced in May 2018 and released (at least in beta) in October that year. A surprise 2020 release for Starfield is therefore possible, although a 2021 release may be more realistic; even Bethesda might be wary of releasing a new game close to the release of CD Projekt Red's Cyberpunk 2077, another SF CRPG and widely anticipated to be the biggest game of the year, in September. Bethesda have ruled out any major new announcements in June, which suggests that if the game is to be fully unveiled, it will be much later in the year, making a 2021 release far more likely.

After Starfield, Bethesda's next project will be The Elder Scrolls VI, the eagerly-awaited sequel to their all-conquering 2011 game Skyrim. It is likely that that game will not follow until at least 4-5 years after Starfield.
Posted by Adam Whitehead at 22:53

If Fallout 4 came out in 2015 and Starfield comes out in 2021, even with Bethesda acquiring or setting up multiple new studios, I think it's extremely optimistic to expect Elder Scrolls VI as early as 3 years after Starfield, especially given that ESVI will apparently have a lot more in new technology and engine upgrades than Starfield (which is running off the same engine tech as Fallout 4 and 76, just tweaked a bit).

Of course, I'd be happy to be wrong about that.

Interesting info regarding the engine leap update for TES. I didn't know that.

Well. after the last Fallout offering i have trouble trusting Bethesda to make a game i would like to play. There is no trust, even active mistrust. After they release it i will wait for the reviews, wait for the game to drop significantly in price and only then will i consider buying it. In this day and age one has to make informed concious choices.