The United States military has inaugurated its latest service arm: Space Force. Newly-promoted four-star General Mark Naird is appointed as Space Force's first commanding officer, operating out of a base in Colorado. Disappointed at not getting command of the Air Force, Naird nevertheless throws himself into his new role with gusto, determined to fulfil the US mandate to "put boots on the Moon" in the next four years. 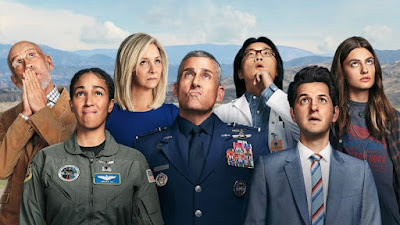 Space Force comes with impeccable credentials and impeccable timing. It's the latest creation from American producer/writer Greg Daniels, a long-term writer from Saturday Night Live and The Simpsons who is also the co-creator of King of the Hill, The Office (USA) and Parks & Recreation. Daniels is teamed with his old collaborator Steve Carell, the star of The Office (and numerous films). The show also launches on the exact same weekend that, for the first time in a decade, American astronauts are launched back into space by an American spacecraft, a fortuitous bit of timing.

Space Force is, of course, rooted in the widely-derided decision to create a new branch of the US military dedicated to space supremacy. Once the slightly amusing name and Star Trek-esque insignia are out of the way, though, the idea has some merit, not least because other nations are pressing ahead with their own plans to militarise orbital space. The show gets the mockery of the basic concept out of the way in the first few minutes and then plays the job itself mostly straight, with the comedy arising from the characters and their workplace misadventures, not helped by increasingly impossible demands from the Twitter-obsessed POTUS (whose identity is pretty clear, but never formally identified in a clear case of hedging the writers' bets against the results of the November 2020 election).

Carell stars at General Naird, a competent US military office put in charge of a service about which he knows pretty much nothing. Naird is likeable, mostly efficient and a firm believer in the American Dream, and fortunately nowhere near as hyper-incompetent as Michael Scott. Carell plays him as a gruff, no-nonsense type with moments of humanity (such as a tendency to sing 1980s pop hits to relieve stress). The show is rooted in his dynamic with chief scientist Dr. Adrian Mallory, who is played with formidable skill by the legendary John Malkovich. Mallory is a typical scientist, with some comedy mined from his commitment to the use of space for peace until he is insulted by a Chinese rival, at which point he becomes unexpectedly more belligerent.

The rest of the ensemble is made up of Ben Schwartz (Parks & Rec's monstrous Jean-Ralphio) as "social media director" Tony, Tawny Newsome (Bajillion Dollar Propertie$) as astronaut Angela Ali, Jimmy O. Yang (Silicon Valley) as Dr. Chan  Kaifang (Mallory's number two) and Diana Silvers (Booksmart) as Naird's teenage daughter, Erin. It's a fine cast who rise to the occasion admirably, although viewers may be confused by what happened to Lisa Kudrow as Naird's wife Maggie, who is set up as a regular member of the cast and is immediately demoted to an occasional recurring character instead (in a subplot that is never really fleshed out). There's also a larger recurring cast who come and go through the episodes, led by Noah Emmerich (The Americans) as Naird's arch-rival General Grabaston, normally a Very Serious Actor who clearly relishes the chance to do something fun and runs with it with aplomb. Fans of comic legends Diedrich Bader and Patrick Warburton will also be happy to see them back on the screen, but perhaps bemused that they have so little to do. There is also a note of sadness in the cast, as the late Fred Willard makes his final screen appearance as Naird's father, playing an ailing old man but one whose comic timing and delivery are as sharp as ever.

The cast is top-notch, but not always best-served by the scripts. The show lurches from outstanding, genuinely amusing gags (a whole sequence with a space "chimpstronaut" in the second episode gets ever more preposterous and ever more funny) to moments that fall much flatter, such as the ongoing gag about the blatantly obvious Russian spy (which the show gives up on halfway through and abruptly vanishes). The tone is also variable, with Veep-style political lunacy mixed in with much broader toilet gags, and Office-like observational work humour. At one point the show goes quite dark when Naird's daughter is put in a genuinely sketchy situation, and at another the show has a surprisingly nuanced and progressive take on relationships which is interesting but feels a bit out of keeping with the rest of the series.

The other problem the show has - and this is a rare one these days - is that it is too short. At just ten 25-30 minute episodes, the pacing feels shot to hell, with the team going from barely being able to get into orbit to landing a lunar base on the surface of the Moon in just a few weeks. There are character interrelationships which feel promising from a characterisation and comedy perspective (particularly the odd-couple pairing of Chan and Angela, or the semi-romance between Erin and a base security guard, or the awkward opposites turning into a bromance arc of Naird and Mallory) which are simply not given time to breathe or develop naturally, and sometimes feel like they lurch forwards between episodes. With 20 or even 14 episodes, it feels like these storylines could have been advanced a bit more naturally.

Still, although the first season of Space Force (***½) is rarely outstanding, it's also rarely awful. It has tremendous production values, a surprisingly committed attitude to the science (the chimpstronaut sequences even briefly recall Gravity's discussion of orbital mechanics and space physics), an absolutely excellent cast and a steady, if not constant, stream of low-level laughs. It's certainly not disgracing itself when compared to the also-patchy first seasons of The Office and Parks & Recreation, and the foundation is in place for a stronger run later on. Space Force is available worldwide on Netflix now.
Posted by Adam Whitehead at 12:18