Note: this is a particularly disturbing story and I advise caution before proceeding

Last year a story broke in a few corners of the fantasy community which seemed to vanish almost immediately, which is surprising given how startling it is. Certainly I did not hear about it until this week. The story confirmed that fantasy author David Eddings and his wife Leigh were jailed for a year in 1970, having physically imprisoned and mistreated their adopted son and mentally traumatised their adopted daughter. 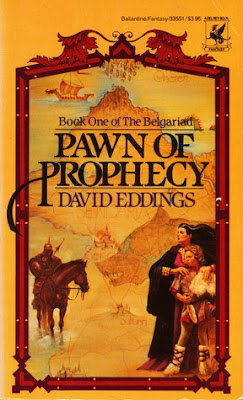 David and Leigh Eddings were the co-authors of the Belgariad, Malloreon, Elenium, Tamuli and Dreamers fantasy series, which cumulatively have sold almost 20 million copies. The Belgariad, in particular, is often hailed as a formative post-Tolkien fantasy series, serving as a frequently-recommended gateway book for new and younger readers to the genre.

The Eddings married in 1962. They adopted a son in 1966 and a daughter several years later. In 1969, alerted by neighbours to the sounds of mistreatment at their South Dakota property, police arrived to find the adopted son locked in a cage in a dirty basement (the basement shared with several animals) and being beaten by his parents with a belt. The Eddings were arrested and the children removed into protective custody (subsequently their adoption of the children was revoked). During the subsequent trial, exacting details of physical and emotional abuse emerged, with the children imprisoned in the cage for the slightest perceived disobedience and corporal punishment being regularly administered. Both children were traumatised by their experiences.

David and Leigh Eddings spent a year in jail in 1970, during which time they lost their jobs and relocated on release to Denver, Colorado. David Eddings tried to make a career as a writer, but his early attempts at contemporary fiction bombed. It was only when he saw a paperback copy of The Lord of the Rings on sale in the local grocery store that he realised fantasy was a big thing and began work on The Belgariad. Lester del Rey, hungry for more fantasy after the huge success of The Sword of Shannara by Terry Brooks and the first Thomas Covenant trilogy by Stephen Donaldson, snapped up the series and began publishing it in 1982.

It should be noted that the Eddings never made any mention of their time in prison at any point during their careers in the public eye, with David Eddings sometime joking about voluntarily quitting academia and getting a job in a grocery store because the pay was better.

Leigh Eddings passed away in 2007, David Eddings following in 2009.

This is a particularly unpleasant and sad story. Like many fans of fantasy fiction, The Belgariad was one of the first fantasy series I ever read in the 1990s. I never rated it quite as highly as others (I'd already read Pratchett and Tolkien by that time), but it was certainly a reasonably fun, early fantasy series. I disliked the sequel series and his later work, which felt massively derivative of what came before. I know there's a lot of people out there who are much bigger fans of Eddings and this is sad news for them. Along with the (even more disturbing) revelations several years ago about Marion Zimmer Bradley, it merely reinforces that authors are still people and sometimes extremely flawed and even criminal ones.

Both of their formerly adopted children appear to be in good health, which is good news. The beneficiary of the Eddings Estate is Reed College in Portland, Oregon, where proceeds from legacy sales of their books help educate students.
Posted by Adam Whitehead at 22:32

I suppose the glimmer of light for their fans is that this all happened more than a decade (and a prison stint) before they wrote their books. Maybe they reformed - we have to at least accept the possibility that criminals may reform. Their silence on the matter may have been shame, rather than deceit. Perhaps.


Having said that: sadly, I'm not shocked. Their work is, to put it mildly, messed up in many ways. There's constant background themes of romanticised paedophilia and non- (or impaired-)consent, there's a prurient level of violence, particularly of a sexual kind, and lots of abused children, and fundamentally almost all the characters are psychopaths. And for the most part, it didn't feel so much like a fantasy, but rather just a messed-up view of the world. A lot of the relationships, that are presented as healthy, are really problematic when you think about them.

Of course, healthy people can write all kinds of fantasies; and being seriously messed up and rape-y and abuse-y was kind of the norm for the era (Eddings books are messed up, but not on the scale of, say, Anne McCaffrey!). So I'm not trying to say we should all have known all along. Just that, as someone who read Eddings from childhood - the Belgariad was one of the most important things in my childhood, perhaps what started me on fantasy as a genre (rather than just Tolkien as an author) - this comes as a surprise, but sadly not a shock. I can, as it were, understand how the author and the person beating children in cages could be the same person.

Regarding the books: I think Eddings is actually maybe a little bit underrated. The Belgariad is pretty vacuous (though compelling for kids!), and his later series are indeed in many ways re-runs (the Mallorean even heavily lampshades the fact it's just repeating the Belgariad). But the Elenium is actually pretty interesting for how different and more ambitious it is in style from the first two series (at a time when he was massively succesful and didn't need to experiment). It's grimdark avant la lettre, and it makes some bold decisions - some for very questionable reasons to be sure (like having the central romance story be about, in essence, a man being raped by his daughter until he likes it), but interesting to read. I loved the fact that so much of it centres on the mechanics of papal elections - with vote counts every few pages, and entire subplots of parliamentary procedural tricks (along with the insanely high decapitation count and the satanic lesbian sadomasochism, etc). As a kid, it was like nothing I'd read before (or since, really). And the demons actually were frightening - there's a real hint of horror there, behind the glossy happy smily joking-casually-about-mass-murder sheen.

It's not a great series, because it's not that well written. But there's genuinely some interesting ideas there.

The Eddingses and MZB are FAR from the only cases in SF. It is a real problem in the field. Look no further than Samuel R. Delany; not only does he write about pedophilia explicitly but is a NAMBLA supporter. Also that Kramer guy who started DragonCon. Look into it. There are literally dozens of these fucks in SF/F.

I find the phrasing of your article could be refined (it has not just "been revealed").

...but the newspapers knew about the abuse back when it happened. See his wikipedia entry article for the actual newspaper links.

The article in question isnt about the Author or his wife. It's another Eddings...very sad how miss information is so easily belived. The female in the article doesn't have the same name and David has all of a sudden got a middle name... I've correct wikipedia hopefully no one else will be gullible

I asked one of his publishers who worked directly with them and they confirmed it's the same David and Leigh Eddings. They were not aware of the situation for some time and were extremely unhappy when the information came out, but since they were both dead by that point there wasn't much they could do at that point. But they confirmed the identities are the same.

@Unknown -- no, it is inded that David Eddings.

His wife changed her name.

I've only just found out about this, and it is just disgusting.

The Belgariad was my introduction into the F part of SF&F, having previous been only a science fiction reader. I had been considered reading the series again 30 years later, but was hesitant in case it wasn't as good as I remembered. And now I don't think I will.

I don't understand why this wasn't more widely known.

Another book spoiled for similar reasons is Mists of Avalon. Author Marion Zimmer Bradley has a really nasty past in amongst all the good stuff she accomplished. I just don't get it.

This only proves once again I am right that you should always avoid digging into the personal lives of your heroes whether it's through unauthorized biographies etc because they will never be as grand nor as upright or measure up to the image you have of them in your head not to mention the fact it's really none of your business. Treat them as the name on the cover, if you liked the book look for another by them, if not forget them and move on.

Of course it's the same David Eddings

I just came across this news. This is quite disturbing. I am just finishing rereading the Mallorean for about the fifth time in my life. When I was in 7th grade I wrote a letter to Eddings and told him I wanted to be a writer. I also asked for an autographed picture because I was a child and in 7th grade. He returned the letter corrected in red pen and wrote on the back of it “If you plan on being a writer, I hope this letter isn’t a representation of your potential. As for the picture, forget it; you wouldn’t like what you see.” So, in hindsight, I guess this news isn’t so shocking.

I learned long ago that we can enjoy the work and not like the creator. The Eddings work was very instrumental in certain parts of my personality, even to this day. It’s sad to hear this but it doesn’t take away from the fond memories of Belgarion.