It'd be beyond a cliche at this point to note that video games are the dominant mass-media entertainment of the modern age, that they make more money than the film and music industries combined and so forth. Unfortunately it does remains a pertinent cliche that, for all its global reach, vast global audience and growing longevity (we're approaching the 50th anniversaries of the first dedicated home video games and video game consoles), TV writers and documentarians seem to struggle on how to present them on screen. 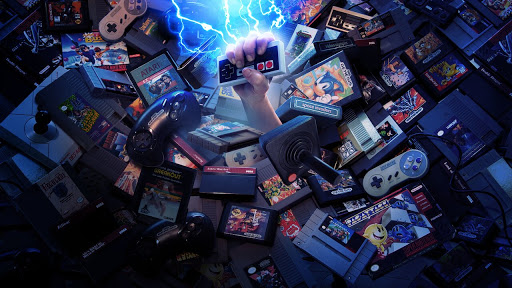 High Score, from Netflix, adopts an interesting and promising approach: in each of its six episodes it identifies a key theme, moment, genre or piece of hardware and uses that as a fulcrum around which to tell the stories of several games and the people involved in making them. The first episode is about the rise of the arcade co-op and home console hardware, focusing on the invention of Space Invaders, Pac-Man and Missile Command, the work of unsung pioneer Jerry Lawson who invented the commercial video game cartridge (although earlier prototyping work by Alpex Computers goes unmentioned), and the development of E.T., the game blamed (somewhat unfairly, which the documentary does note) for the 1983 video game crash. In the middle of this we also meet Rebecca Heineman, the winner of the first Space Invaders US national championship and therefore one of the first-ever e-sports champions; Nolan Bushnell, the co-founder of Atari; and the developers of the aforementioned games. It's all very interesting, but it also feels like we're missing some key pieces of the puzzle: the actual very early consoles themselves are completely ignored and progenitors Spacewar! and Pong get short shrift (the first game goes completely unmentioned until it incongruously shows up in the final episode, whilst Pong is mentioned a lot but there's no specific coverage of the game itself).

This format continues in the second episode, which focuses on the rise to prominence of Nintendo, via Donkey Kong, and how its Nintendo Entertainment System helped reboot the video game market after the disasters of 1983. We get some obvious stories here - the development of Donkey Kong and how it was sold in the US - as well as some lesser-known stories, such as the story of the winner of the first Nintendo World Championship and the exploits of superstar lawyer John Kirby, who helped Nintendo defeat a lawsuit by Universal Studios (alleging that Donkey Kong was a rip-off of King Kong) and was then immortalised as the video game character Kirby.

This approach has several strengths, such as hooking people in with mention and discussion of superstar, well-known games and then bringing in lesser-known figures and more obscure games. However, it can feel a bit scattershot and sometimes the connective tissue between the stories is extremely thin. The third episode exemplifies this. This episodes focuses on adventure and roleplaying games and focuses on the well-known story of Richard Garriott creating Ultima but also has a lengthy section on about Roberta and Ken Williams, the superstar creative duo behind the massive King's Quest series. However, King's Quest goes completely unmentioned in favour of in-depth discussion of their first game, Mystery House. This is quite interesting, but does feel slightly incongruous. There's then a big time jump to discussing the original Final Fantasy, completely missing out the important CRPGs that fell in the interim: Might & Magic, Wizardry and The Bard's Tale (particularly oddly, as Bard's Tale III designer Rebecca Heineman had already appeared in the first episode), not to mention the game that directly inspired Final Fantasy, Dragon Quest. The episode then jumps forwards even further to 1992 to discuss GayBlade, a RPG game that was supposed to introduce LGBTQ themes to gaming but didn't, because 1) it was never released and 2) Caper in the Castro, which actually was released, had already done that three years earlier, but goes completely unmentioned. Discussion of the development of the game is genuinely interesting, but it feels a bit of a non sequitur given it never came out, went missing for thirty years and the story lacks an ending: a copy of the game was recovered between the documentary being filmed and being released, so we get a brief text interlude confirming the game has been found again but nothing more.

There's plenty of interesting trivia here - Trip Hawkins founding the biggest video game company in history, Electronic Arts, because he was just obsessed with getting an American football video game on shelves; a couple of British developers feeling like fish out of water as they visit Japan to convince Nintendo to include groundbreaking 3D hardware in this SNES games, resulting in StarFox - but many of them feel incomplete. Trip Hawkins isn't asked how it felt when his company was voted the worst company in America for several years running, and the StarFox segment is bafflingly missing its obvious, dramatic conclusion: how the developers worked for years on StarFox 2 for years and effectively completed it, only for Nintendo to refuse to release it. It was finally released, to a high positive reception, in 2017.

The scattershot approach is deliberate and it's clear that not everything could be included. The early co-op section does quite well to fit in three games (Pac-Man, Space Invaders and Missile Command), so moaning about the non-appearance of Asteroids or Defender would be perhaps churlish. But there are some really gaping holes that are much more difficult to defend. You simply cannot discuss video games of the 1980s without mentioning Elite - sometimes cited as gaming's Jazz Singer moment, when the combination of total open world freedom and 3D graphics had as seismic an impact on gaming as sound did for film - and that game goes completely unmentioned here, as in fact do almost all developers who aren't American or Japanese. The British Argonaut guys on StarFox are an exception, but only because of their connection to Nintendo. Massively important machines and platforms are also completely missing, such as the Commodore 64 and Amiga, the ZX Spectrum and the Sega Master System (which given an entire episode is effectively dedicated to Sega, is weird).

In the end, High Score (***) ends up trying to do way too much in too little time and can't be much more than a collection of interesting, some new, some random anecdotes, held together with some slick presentation and cutesy interlinking graphics. It's too general to appeal to hardcore gamers and it's too unfocused to tell people not interested in gaming any kind of story (and if you're not interested in gaming, why would you watch this?). It does show that a proper, long-running documentary series on video games could be really interesting, something like Netflix's The Toys That Made Us but dedicated to individual games, or even series. The phenomenal YouTube channel Noclip has done some amazing work in exploring behind the scenes of major games, so perhaps something like that cut for a mass audience would be more interesting. As it stands, High Score passes the time and shines a light on a few under-told tales from the margins of gaming history, but otherwise is so full of holes that it can't achieve its goal of being any kind of history of the medium. It is available to watch on Netflix now.

I had NO IDEA that Nintendo actually had a help desk of sorts for gaming. It led to the publishing of the Nintendo Power magazine. It's amazing how different things are now and how fast they are starting to change.

I was a tad disappointed with this, felt each episode could have a series all of it's own. And I also wondered about the lack of the Master System, it made it sound like Sega came out of the gate with the Mega Drive. It has however, got me playing StarFox on my Switch, so good times!!