Following the publication of yet another publicity image from BBC America's The Watch, a TV series loosely "inspired by" Sir Terry Pratchett's Discworld books, his family and associates have once again made it clear that they do not approve of the project and have distanced themselves from it. 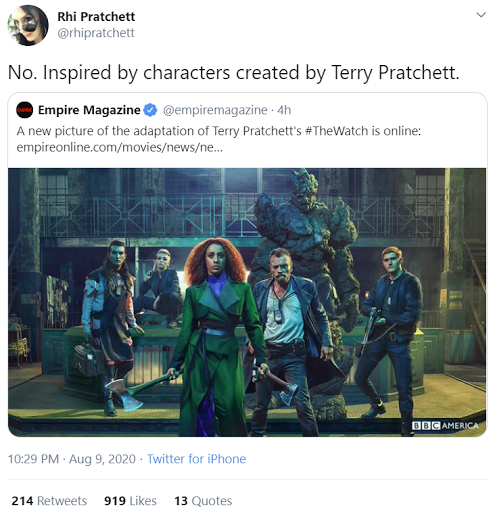 The Watch - then also referred to as The City Watch and also less seriously as CSI: Ankh-Morpork - began life way back in 2011 as a co-development between Sir Terry Pratchett and the BBC. Pratchett had seen several adaptations of his work undertaken in the past, most notably the animated Channel 4 versions of the novels Wyrd Sisters and Soul Music, both released in 1997, and Sky One's live-action versions of Hogfather, The Colour of Magic, The Light Fantastic and Going Postal in 2007-10. Although none of these adaptations were outright terrible, none arguably were as good as they should have been given the strength of the source material. Pratchett wanted to get more involved in these adaptations and in 2012 set up a company called Narrativia. Narrativia's goal was to try to establish greater control over the process and ensure greater fidelity to the feel of Pratchett's work transplanted to the screen, although not necessarily being completely 100% book-accurate in all respects (Pratchett understanding well that changes were needed given the shift in medium).

Sir Terry himself led discussions with the writers and it looked like everything was set for a faithful adaptation based on the novels, but with the freedom to move things around and take different ideas from different books. One idea apparently baked in from the start was that the series would not directly adapt the novels, but would instead pick up in the "present day" Discworld setting and use the novels as backstory, with the characters already in place. Among Pratchett's own ideas were using Ankh-Morpork's oft-mentioned, never-seen hospital as the setting for one storyline and using the creation of a City Watch band as a running gag.

Pratchett and his assistant and business partner Rob Wilkins were filmed discussing the project with the team from Prime Focus, the production team originally slated to make the show, by SFX Magazine in March 2011. Gavin Scott (Small Soldiers) and Terry Jones (Monty Python) were slated to write and possibly direct some episodes, and Pratchett's daughter Rhianna, now a respected writer in her own right, was also attached. The series was envisaged as being made in the UK on a relatively modest budget of $2 million per episode for a 13-episode first season, to air on the BBC. Crucially, the deal for the project was signed in 2011, before Narrativia was founded, with Sir Terry as the only named person involved on the book side of things.

Despite there being a strong wind in the sails of the project at this juncture (in October 2012 it was even reported - later erroneously - that the show had been greenlit), it appears that the BBC began to have second doubts and around 2013 put the brakes on the project. The BBC was under fire at the time for what was deemed to be over-extravagant spending in the aftermath of the global recession, and with The Watch coming in at significantly more expensive than Doctor Who, one of the BBC's own flagship programmes, it appears that enthusiasm for the project had dried up.

At some point between 2013 and 2016, possibly around the time of Sir Terry's sad passing in March 2015, the rights for the project were transferred from BBC Enterprises to BBC America, which decided to completely re-tool the project from the ground up with a whole new writing team. It appears during this time that Narrativia was effectively shut out of the process. Both Rhianna Pratchett and Rob Wilkins later reported (with somewhat-but-not-really concealed misgivings) that neither they nor Narrativia as an entity had been involved in the show for "many years." Nevertheless, when the show was formally greenlit (for real this time) in October 2018, Narrativia was namechecked as still being involved.

Prior to this point it appeared that the project was still going to be in line with Pratchett's original vision, where the novels are canon background material but the story takes place in the present-day of the book universe. Early reports that Ankh-Morpork was being modernised makes more sense in that context; although the city starts life in the first Discworld novel as a traditional medieval fantasy city, by the end of the series it as become a lot more Victorian and steampunk in technology and character, complete with railways and telegraphs. However, the initial casting reports from the series provoked concern, particularly when it was revealed that Sybil Ramkin, a middle-aged, rotund woman in the books who is nevertheless a major and powerful character, was being aged and slimmed considerably down to add sex appeal and action in her newfound role as a "vigilante," fighting crime on the streets of the city. The character of Cheery had also been changed from a young dwarfish woman anxious to prove her worth in her patriarchal society whilst also retaining her femininity to a young, non-binary human raised by dwarfs, borrowing Carrot's background and story for no immediately obvious reason.

By November 2019 it was clear that the project bore little, if any, resemblance to the source material, causing an immense backlash from fans and critics alike. In January 2020 the first publicity pictures from the project were released, reigniting the furore as it became clear that Ankh-Morpork in the TV show was a much more contemporary city, inspired by "punk rock" and featuring very modern-looking street lights and graffiti. It was at this point that Rhianna Pratchett and Rob Wilkins addressed the situation. Wilkins noted, rather forcefully, that The Watch is "inspired by, NOT based on," the series. Rhianna Pratchett further noted that the series being developed by BBC America is not the same series that her father signed off on, when it was a very different (and presumably better) beast and she hadn't been involved for years.

The Discworld Monthly published a run-down of the project here which seems to explain the root cause of the problem: the original contracts between the BBC and Sir Terry Pratchett stipulated that Sir Terry had some degree of influence and approval over the production, not Narrativia; Narrativia wasn't formally founded until after the initial contract was signed. As a result, when Sir Terry sadly left this Mortal Disc in 2015, there was no longer any kind of creative control being exercised from the book end of things and that allowed BBC American to effectively do whatever it wanted with no input from Narrativia.

The Watch is currently scheduled to air on BBC America in January 2021. Narrativia has signed a series of new deals with Moving Pictures to develop TV and film projects based on the other Discworld novels. The Wee Free Men is also in production at the Jim Henson Company, with Rhianna Pratchett attached as a writer. It appears that BBC America only has the rights to the City Watch sub-series of Discworld novels (Guards! Guards!, Men at Arms, Feet of Clay, Jingo, Night Watch, Thud! and Snuff) and cannot include any elements from the other books. Moving Pictures may have the rights to all the other books (including those previously filmed by Sky One and Cosgrove Hall, since the rights reverted to the Pratchett Estate in the early 2010s), with Narrativia likely having more say over these adaptations.

The Discworld book series consists of 41 novels and numerous ancillary works and is the joint-biggest-selling adult fantasy series since The Lord of the Rings, currently tying with Robert Jordan's The Wheel of Time and George R.R. Martin's A Song of Ice and Fire at around 90 million book sales apiece.

I really haven't forgiven the Terry Pratchett Estate for insta-withdrawing the rights to the third Discworld board game by Martin Wallace (the first, "Discworld: Ankh-Morpork", is a sublime and hilarious gateway game) after Terry Pratchett's death. In the third game, you would have been playing the Discworld gods at Dunmanifestin.

My only association to Rihanna Pratchett's name is that she wrote the script to Mirror's Edge, a video game where the story only works if you skip all the story cutscenes and piece the stuff together from in-game dialogue.

Good on Narrativia for dodging the estate scourge, and godspeed. Either it'll be good, or it'll be forgotten - Terry Pratchett's name won't be any worse off in any case.