Update: Morris has - somewhat confusingly - suggested on Twitter that this interpretation is incorrect, although - on video - he said outright that the locations of these episodes have been identified and he is confident of their eventual return. I suspect based on his comments that the "negotiations are underway" bit is what is under contention, due to his statement elsewhere that his approach is "letting things lie" until the episodes are returned in their own time. So, to be more accurate, the continued existence of seven missing Doctor Who episodes has been confirmed, with the hope that one day they will be returned to the BBC.

The rest of my original report follows: 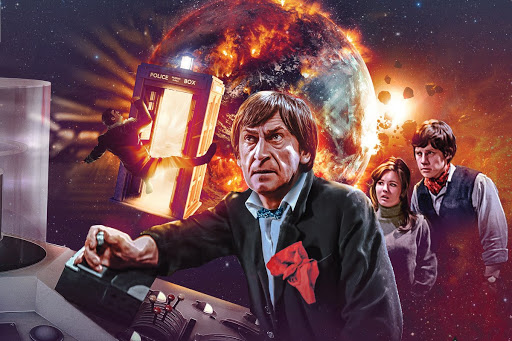 As was common at the time (from its inception until the 1970s), the BBC used to produce television programmes with no expectation that they would ever be repeated or commercially released. Once aired, it was common for the tapes containing TV shows to be wiped and re-used to save money. Doctor Who was a victim of this process, with 147 episodes junked between 1967 and 1978. These episodes consisted almost entirely of material from the First and Second Doctors (William Hartnell and Patrick Troughton), the first six seasons of the show, aired from 1963 to 1969 and filmed in black-and-white, which was considered even less valuable in the colour era. Some material from the Third Doctor, Jon Pertwee, was also destroyed, but later recovered via black-and-white copies that were digitally re-colourised.

The advent of the home video format in the late 1970s and intervention from fans made the BBC change its mind quite rapidly and almost as soon as it stopped the purge of its archives in 1978 it began trying to reclaim the lost material. In some cases BBC engineers had saved episodes and kept them safely at home, or sold them to private collectors. The most valuable resource, however, was the BBC's foreign sales department. Since Doctor Who began in 1963, it had been sold widely abroad, particularly in the Commonwealth, and in many cases those countries had hung onto their copies of old episodes. Between 1978 and 2013, 50 missing episodes of Doctor Who were recovered from these sources and returned to the archives.

This has left 97 episodes - one eighth of the total number of episodes of the entire series - officially missing. 26 serials are affected, with 10 serials completely missing altogether.

The last time missing material was returned to the archive was in 2013, when Philip Morris recovered nine missing episodes from a TV station in Nigeria. These episodes constituted all of the missing material from the serial The Enemy of the World and four of the five missing episodes from the immediately succeeding serial, The Web of Fear. In the case of The Web of Fear, it was revealed that the remaining missing episode (the third) had also been identified, but had been removed from the station by persons unknown before the rest of the serial was sent back to the UK.

Morris has since confirmed that the identity of the people who took the episode has become known and very delicate negotiations undertaken to hopefully return the episode.

Five additional episodes were recovered by Doctor Who fan Ian Levine the same year from Taiwan, but these were additional copies of episodes already in the archives. Nevertheless, the discovery promoted renewed interest in Taiwan as a location of interest to episode hunters, although some questions were raised about the find.

During the Time Space Visualiser 2 online event earlier this year, Morris confirmed that "at least" six more episodes currently officially listed as missing have been identified in the hands of private collectors. The principle block to them being secured is not money, but rather the fear of the collectors that fans might learn their identities and berate or harass them (as has happened, to some degree, in the past, even to Morris himself despite his success in recovering episodes from overseas). Even more delicate negotiations to secure the anonymity of these collectors are required before they can be returned to the BBC archives.

The hunt for the missing episodes has gained some urgency in recent years. 1960s BBC film stock is fairly durable, but after being left in tin cans in dusty back shelves of basements in places like Australia, Singapore, Hong Kong and Nigeria, it's possible that some old stock will have become unusable: some reports have surfaced of promising leads ending only in old warped cans filled with unidentifiable goop that may have once been film stock. It is also already known that at least one TV station in Sierra Leone had a very large stock of the missing episodes (almost all of them, according to some records) before being levelled to the ground in the civil war in that country in the late 1990s. Time is not on the hunters' side here, but it is good to know at least some more missing episodes from the show have survived.

Really ? Is this true ?
Because all Philip Morris does daily is have twitter rants about how much he hates Chibnall, Whittaker, and everything about the 13th era.
He’s absolutely abhorrent with the amount of sick evil vile stuff he says daily.

Also there’s currently 97 missing, if that sexist has found 7 then it would take the total down to 90 because we are already at 97.
You getting the maths wrong just makes this even less believable

Why are you reposting news from April. There seems to be nothing new here.

What negotiations are required. Give them loads of money then when recovered and re archived you can give them original copies back and then rake in from dvd sales

In reference to the Taiwan tapes, I draw your attention to this page on this extremely comprehensive site: https://broadwcast.org/index.php/Taiwan_Prints

There is some ambiguity as to the existence of the tapes...

Do we have any idea which episodes these might be?

As a long time Whovian, I bet all the fans of Classic Who have their fingers crossed and the safe return is very likely.

Phil Morris says the above is utterly fake. Why make this stuff up?

This is monumental news for all Whovians, young and old! Kudos to Phil Morris’ dedication of locating and carefully cutting through the ‘red tape’ to get seven more episodes of the longest running science fiction series ever back into the archives of the BBC, which in turn will hopefully lead them into the collections of us dedicated fans that have been collecting them continuously since the beginning of the invention of home media. Be it Betamax, VHS, Laserdisc, DVD, Blu-ray, or even UHD/4K, these missing episodes will (hopefully soon) land into our hands to be placed on the shelves of our personal collections to share with our family and friends to create even more fans of the institution known as Doctor Who!
E. G. Glover

I'm a bit confused about how Phillip Morris on Twitter can "debunk" what he said in some considerable detail and at length and was captured on video.

"“I have a lot of friends who are collectors… and I will tell you straight away now that at least six episodes – missing episodes – exist, to my knowledge, in the hands of private collectors."

Not sure what is "false" and "fake" about that since he said it himself.

It is entirely possible that Morris is concerned that publicising the story makes the recovery of the episodes more difficult - which has been a continuous problem throughout the whole history of recovering material - and it may also be possible that his own statements at Time Space Visualiser 2 were perhaps a tad exaggerated and he's been rowing back on that. Further clarification would be appreciated.

"Also there’s currently 97 missing, if that sexist has found 7 then it would take the total down to 90 because we are already at 97."

The 7 episodes have not been returned to the BBC, so they remain officially missing from the BBC archive. If Morris's statement is correct (although he now seems to be contradicting himself) and the 7 episodes are returned, then the missing count would drop to 90.

Paul Vanezis on the Radio Free Skaro podcast about 18 months ago said he knows a collector who has 2 missing episodes - 1 Hartnell and 1 Troughton. He hasn't seen the contents of the prints, but I believe he's said elsewhere he's seen the film cans.

Phil Morris in the lead up to the 2013 announcement, did release a statement on his TIEA site proclaiming that all missing episodes were gone - it is possible he was trying to deflect attention as there were a huge number of rumours swirling around at that time, some of which were proven correct!

Everyone applauds what Morris has done in terms of finding those missing episodes that were returned in 2013 - most complaints (I'm not going to comment on his twitter stuff) rest on his adamant refusal to be more specific about what he has uncovered in his searches. He's dropped hints in tv interviews, on podcasts, in magazine articles, but the where/when/what stuff is noticeably thin on the ground. If he has found episodes, where are they and what is the delay in returning them to the BBC? If he hasn't found anything, then front up and say that. Even if he has just found paperwork about the final fate of prints in, say, African nations that had bought them, that would be a fascinating insight into what happened way back when.

I think that in many cases the searches are extremely sensitive involving commercial concerns, NDAs and financial negotiations and having them publicised on the Internet can be counterproductive. Which is understandable, but, y'know, in that case stop publicising them on the Internet and then moaning when people talk about them.

We also know from the overall history of the missing episode search that the paperwork trail can also be incredibly promising, but often ends in disappointment (the film in question having been destroyed years earlier, or allowed to deteriorate into becoming unusable), but we also have these occasional very solid finds, like all of Tomb of the Cybermen or effectively all of Enemy of the World showing up, which keeps the hope alive.

Phil Morris talks absolute rubbish and is only interested in keeping up his own standing in the eyes of the Dr Who fan community. It's about him retaining his little bit of fame/popularity. 11yrs since he found the episodes in Africa. Nothing since.

You can't have your cake and eat it too Phil! This is what happens when you make vague promises and don't elaborate, not because of delicate negotiations but because you'll be exposed as an attention-seeker. Just stop winding fans up. Please!

They could search in Mexico, in that country a dubbing of the serials of the first and second doctor was made into Latin Spanish under the name of "Doctor Mystery" (Doctor mystery). Surely there may be copies of the original tapes in a recording studio.

Get over yourself. It's not even Doctor Who in anything but name. He's not wrong. Just because he has standards doesn't mean he's lying about a franchise he clearly loves.

Why are so many Doctor Who fans such negative twats? What a bunch of whiners.

After seeing the animation in Grand Theft Auto recently, I think Doctor Who fans should serious copy the kind of technology they use in the game and make it ready for old Doctor Who!