Captain Flint and the crew of the heavily-damaged Walrus have located the Spanish treasure ship Urca de Lima. Unfortunately, a heavily-armed Spanish garrison stands guard over the gold, forcing Flint to consider an alliance with other parties in Nassau to secure the prize. Meanwhile, in Nassau the town is rocked when Charles Vane and his men seize control of the fort that defends the harbour, putting Eleanor Guthrie into an uncomfortable position as she tries to navigate treacherous waters between her former lover and the welfare of the community. 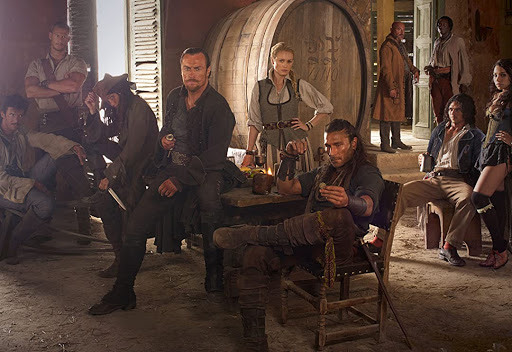 The first season of Black Sails started off as Game of Thrones meets Master and Commander, mixing the character drama and sex of the former against the nautical attention to detail and striking production values of the latter, before forging its own path. The show's strength was telling a plethora of gripping storylines simultaneously, mixing politics, war, criminal enterprises and the idea of nation-building, and how even desperate criminals yearn, on some level, for civilisation.

The second season continues in much the same vein. Once again, the series focuses on Captain Flint's obsession with seizing a prize so vast it defies imagining, but finds it difficult to find allies who share in his vision, or men patient enough to forego other, shorter-term profits in favour of a larger goal. Fortunately, the series dials down the intensity of the first season a bit, where Flint was put in an almost impossible position by the end of the run. The second season rows things back to put him back in command with less risk of the crew turning mutinous every five minutes. It doesn't do this artificially and instead has a solid arc spanning the first few episodes reaffirming the crew's loyalty to Flint, which also causes John Silver to rise to the fore. Tensions over Flint's command continue, but in a more believable fashion.

Elsewhere the show continues to sprawl indolently over many storylines, some personal (the complex relationship between Jack Rackham, Anne Bonny and Max) and others political (such as the struggle for control of Nassau Fort). Most striking is a flashback story where we follow Flint's personal history, his relationship with Lord and Lady Hamilton and his descent from law-abiding naval officer to pirate.

There aren't too many problems with the second season of Black Sails (****½), although the ferocious pace of the first season (which only had eight episodes to work with) is lessened somewhat here with two more episodes to fill, but the stories and character arcs expand well enough to fill the extra time. The production values remain highly impressive, the actors are superb (Max's occasionally overworked accent being perhaps a slight flaw, but the actress is so good it's hardly an issue) and the storytelling is compulsively enjoyable. The show is available to watch via Amazon Prime in the UK and in the USA via Starz.