Malazan co-authors Steven Erikson and Ian Cameron Esslemont have been jointly interviewed at the TSACast and revealed some new information about their upcoming books. 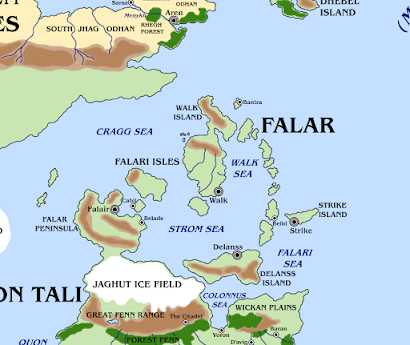 Esslemont is currently working on The Jhistal, the fourth book in the Path to Ascendancy series (following on from Dancer's Lament, Deadhouse Landing and Kellanved's Reach), or possibly the first book in a second trilogy set in the same milieu. This book picks up twenty years after the events of Kellanved's Reach and concerns the nascent Malazan expansion into the subcontinent and archipelago of Falar.

The next books are expected to focus on the Malaz invasion of Seven Cities and the first taking and fall of Aren to the T'lan Imass. Esslemont has also pencilled in the Malaz landings in Genabackis and the Blackdog campaign for future volumes.

Erikson, meanwhile, recently completed The God is Not Willing, the first book in the Witness Trilogy, a sequel to The Malazan Book of the Fallen itself, and is now back working on Walk in Shadow, the concluding volume of the Kharkanas Trilogy.

Email ThisBlogThis!Share to TwitterShare to FacebookShare to Pinterest
Labels: ian cameron esslemont, path to ascendancy, steven erikson, the jhistal, the malazan book of the fallen

Good, glad Erikson is going to finish the Kharkanas trilogy! It's not my favourite fantasy series - and certainly a far cry from tMBotF - but after reading 2/3 already, I was very disappointed when it looked like the final volume would never see the light of day.