The enigmatic sorcerer Kellanved has seized control of Malaz Island. His cohort and ally Surly plots the conquest of her homeland, the Napan Isles. Meanwhile, the mainland of Quon Tali is wracked by war and civil war. Purge and Tali are locked in incessant conflict in the west, whilst to the east the Bloorian League is trying to crush the city of Gris. Conflict stalks the world but great changes are coming in the warrens as well, as Kellanved seeks the Throne of Shadow and also the First Throne of the T'lan Imass, the Army of Dust and Bone... 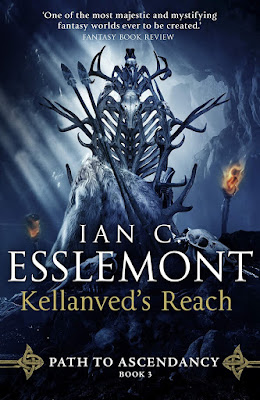 Kellanved's Reach is the third novel in Ian Esslemont's Path to Ascendancy series, which acts as a prequel to both the Malazan Book of the Fallen sequence by Steven Erikson and Esslemont's own earlier Malazan Empire series. Following on from Dancer's Lament and Deadhouse Landing, this book continues the story of Kellanved and Dancer, the founders of the Malazan Empire.

The events described in this trilogy, and in this single novel especially, are vast, epic and the stuff of myth. Kellanved's seizure of the First Throne, his alliance with the T'lan Imass and the military campaigns which saw the Malazan Empire start coming together have been referenced in hushed tones throughout the sixteen novels of both of Erikson and Esslemont's original series, so to see those events first-hand is thrilling. Or rather it should be.

If one word comes to mind when reading Kellanved's Reach it is "rushed". The book is only 330 pages long (barely a third as long as some of Erikson's books) and Esslemont tries to fit into this modest page count no less than five major military campaigns, a major subplot with Kellanved and Dancer exploring the Shadow Realm and the stories of numerous POV characters. There simply isn't enough room to do this justice and as a result we end up bouncing back and forth between characters and stories like a pinball machine. Massive, major events (like the nascent empire's capture of the strategically vital city of Cawn) take place in sentences, let along paragraphs, and the epic final battle which ends with Kellanved's crowning feels perfunctory at best.

This is a shame because the improvement in Esslemont's writing and character voice which has been building since Dancer's Lament continues apace here. The early chapters, which relax a little to focus on the military campaigns on opposite coasts of the continent, are well-written and excellent, and it's fun to see future important characters like Greymane and Skinner arise from the masses to start their own steps down the road to destiny. But around the halfway mark the pace accelerates and suddenly major plot events are whizzing by like they've been shot out of a machine gun.

There's still much to enjoy here, of course, even if the later chapters of the book do start feeling more like a plot summary than a novel. I suspect it will be even more frustrating as - if as seems possible - more books in this series follow; Path to Ascendancy was contracted for three books but the series has sold extremely well, so it may be extended. There's plenty of scope if so (the book ends with Kellanved crowned but only a very small part of Quon Tali under his control), and it'd be interesting to fill the gaps in between this book and Night of Knives (set roughly 100 years later), where Kellanved's plans are finally fully realised.

Kellanved's Reach (***½) is a reasonably solid addition to the Malazan mythos, with some genuinely exciting, myth-making moments. It also feels like the novel should have been either twice as long as it is, or its events should have been split over two books. As it stands, the brake-neck pacing means that the emotional resonance and dramatic power of some long-awaited scenes are diluted. The book is available in the UK now and next month in the USA.
Posted by Adam Whitehead at 17:19

Email ThisBlogThis!Share to TwitterShare to FacebookShare to Pinterest
Labels: ian cameron esslemont, kellanved's reach, path to ascendancy, the malazan book of the fallen

I completely agree with your assessment - I'm a huge fan of anything in the Malazan world but this was all over the place. Random wars that I didn't care about to introduce characters that I didn't recognize and didn't seem relevant.

It definitely feels like an incomplete series. I was hoping for something more along the lines of Forge of Darkness, which is also an origin story, but brought huge amounts of depth and richness to the tale.