1995. In deep space, a war is raging between the Kree Empire and the Skrulls, a race of shapeshifting infiltrators. The Empire's most elite military unit is Starforce, a special operations unit consisting of recruits from different worlds with different but complementary skillsets. One of these recruits, Vers, is being personally trained by Starforce's commander Yon-Rogg, who senses in her great potential. Vers, however, cannot remember her own past. An operation to engage Skrull infiltrators on the planet Earth goes awry as Vers gradually realises that this is her forgotten homeworld, and she starts to piece together her past with the help of a SHIELD agent named Nick Fury. 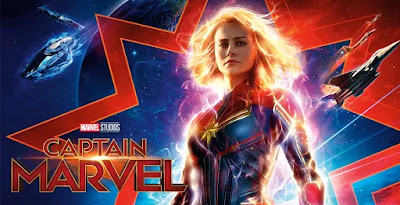 The Marvel Cinematic Universe is now a mature franchise, eleven years, twenty-one films and $17 billion into its run. The MCU has settled down into a smooth conveyor belt of films, churning out three movies a year based on characters both well-known and obscure, including sequels and also original films based on characters never before seen on screen. Somehow it has managed to do this whilst not becoming too tired or formulaic, even if some of the series' standby tropes have become increasingly obvious (particularly a tendency towards self-deprecating humour and a big CGI finale).

Captain Marvel is an interesting movie in that it introduces the - arguably - single most powerful superhero in the entire Marvel canon to cinema audiences. Captain Marvel is the closest thing the comics have to Superman, a being capable of flight, firing energy beams our of her body and even travelling through interstellar space purely on her own power. In the comics the character (who has had several identities) can suffer from the Superman syndrome - coming up with a credible threat to her is quite tough - which is presumably why Marvel held fire this long on bringing her into the fold.

The movie also has a bit more riding on it than that. This is an origin movie not just for Captain Marvel but for the entire MCU. It explains the origins of Nick Fury, Agent Coulson and the modern focus of SHIELD on superheroes. It also brings in the Kree-Skrull War, one of the most iconic storylines and elements from the Marvel Comics which fan have been eager to see ever since the MCU started. And it also ties in with The Avengers: Endgame, where Captain Marvel will return to Earth to join the fight against Thanos.

On this level the movie feels busy and a bit cluttered. MCU fans will enjoy seeing the tie-ins to the cosmic/SF side of the franchise and elements and characters previously seen in the Guardians of the Galaxy movies, whilst nostalgia heads will like the 1990s setting. But it does feel like some elements get lost a little in the mix, and one of these is the central character. Brie Lawson plays Vers/Carol with integrity and presence, but her amnesia means she spends a bit too much of the film as a blank slate, trying to figure out who she is. She gets there in the end, but it takes a while.

More successful is her relationship with Nick Fury, here played by Samuel L. Jackson with some very expensive CGI de-ageing going on. Marvel have experimented with this before in brief shots, but this is the first time they've done it for an entire movie and it is very nearly flawless. Fury is perhaps a bit too quick to adapt to the revelation that aliens exist and are fighting a war on Earth, but perhaps that adaptability is what made him perfect as a future director of SHIELD. Jackson and Larson have great chemistry and the road trip elements of the film are hugely enjoyable.

Also worthy of mention is Ben Mendelsohn as a Skrull leader. Mendelsohn has carved out a recent niche as Hollywood's go-to villain in the humourless martinet role, and it's great to see him being given both a character with much greater depth, a sense of humour and a more relaxed demeanour (helped by him being allowed to use his native Australian accent). There's also a fun cat character, although their prominence in the movie has perhaps been a tad overstated in previews.

Captain Marvel (****) is perhaps a little too eager to fall back on MCU tropes - lots of CGI everywhere, a few too many brief downbeat moments of self-doubt overcome by some punch-the-air good feels as the hero overcomes their issues to stand tall (in a scene oddly extremely similar to a sequence in the last-ever episode of Buffy the Vampire Slayer) - but ultimately ends up being a worthwhile slice of hokum and fun, with strong central performances and some very effective action sequences. Not among the MCU's strongest offerings, but still a very solid movie. The film is on general release worldwide at the moment.
Posted by Adam Whitehead at 00:45