If you're a boardgamer or a wargamer, you've almost certainly encountered the name Richard Borg before. A veteran games designer of several decades' standing, Borg hit the big time around the turn of the century with his Command and Colours rule system, most successfully in the WW2 variant, Memoir '44, one of the most popular and biggest-selling 2-player board games of all time. 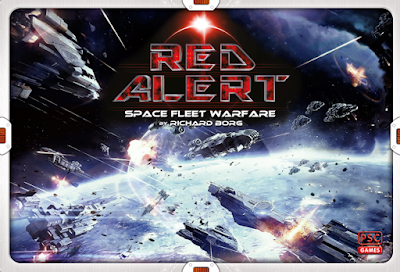 There are numerous other versions of the game, including ones set in the American Revolutionary War (Tricorne), the American Civil War (BattleCry), the Napoleonic Wars (Command & Colours: Napoleonics), World War I (The Great War) and a fantasy version, BattleLore, which in turn has spawned a Song of Ice and Fire/Game of Thrones spin-off, Battles of Westeros, which is fantastic (but did not involve Borg at all).

One of the most logical directions to take the rules system is upwards, into space, and the latest game in the series is now sneaking onto store shelves in the USA, and is already on wide release in Australia. It should be hitting UK shelves over the next two weeks or so.


Red Alert: Space Fleet Warfare pitches the Commonwealth against the Confederation for control of known space, in pitched battles involving battlecruisers, dreadnoughts, flagships, carriers, space stations and fighters. Lots of fighters. Most Command and Colours games are heavily based around terrain, which is less of a thing in Red Alert although there are tokens to represent planets, gas clouds and, in a first for the series, moving terrain tokens for things like comets and asteroids. 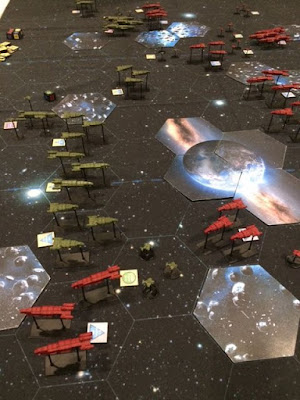 Command and Colours' immense success has been down to the fact it always looks fantastic - colourful maps dotted with excellent miniatures or block counters - but is very easy to learn to play. Scenario maps allow you to set up a battle map in minutes. Each map is divided into three sectors, a central one and two flanks. Each player has a hand of cards and on each turn a player may play one card. This card will say something like "Advance right flank" or "Advance 3 units of your choice". There are also special tactics cards which do things like boost your attacking or defensive power. Each ship has its own attack strength and its own abilities and differing amount of hits it can sustain. And that's pretty much it.

The simplicity of the rules combined with the tremendous tactical depth afforded by the rules has made the Command and Colours system thoroughly addictive and compelling, and it looks like Red Alert has hit the same spot.

The game is being released, unusually, with the core box and six expansions in one go. Alongside the core set, the following expansions are available to expand the roster of ships in each fleet and the amount of space phenomena that can be encountered:


Further expansions are planned which will add at least two additional factions and also allow for planetary assaults and landings.

Once I get my hands on the game, I'll readers know how it plays and if it's worth picking up, but so far it looks very cool, and I suspect enterprising gamers will already be working out how to substitute the existing ships for miniatures from their favourite SF setting (such as Star Wars, Babylon 5 or Mass Effect).
Posted by Adam Whitehead at 00:03