SF&F Questions: How large is Arrakis?


Dune, by Frank Herbert, is the biggest-selling science fiction novel of all time, having sold well over 10 million copies since its publication in 1965. It has been followed by five canonical sequels (Dune Messiah, Children of Dune, God-Emperor of Dune, Heretics of Dune and Chapterhouse: Dune) and various "expanded universe" books of execrable quality from Kevin J. Anderson and Brian Herbert (which can be - and, under all circumstances, should be - safely ignored).

Most of the action in the Dune saga takes place on the planet Arrakis, also known as Dune. Since the book was published, fans have asked about the size of the planet, with various attempts made to estimate the planet's circumference, diameter and mass. Most of these have foundered on a lack of hard information. In the 1990s an informal guess seems to have been made that Arrakis is around the same size as Mars, which seems to have become the default assumption for many fans since then. 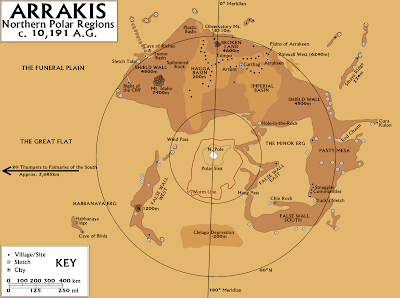 In the novels, Arrakis is presented as a hot, desert world, essentially an entire planet covered by giant sand dunes similar to those of the Sahara. The only exceptions are the two poles, which are cooler and where clusters of mountains, rocks, plateaus and ridges provide some respite from the heat and also allow for the construction of permanent settlements. Most importantly, these rocky outcroppings are the only areas safe from sandworms, subterranean leviathans that can emerge from the dunes and consume people and equipment.

Arrakis is presented as a world with Earth-like gravity (or at least, not noticeably less) and a breathable atmosphere. The latter was a mystery, as Arrakis possesses neither extensive plant life nor oceans, until Frank Herbert clarified in a later sequel that the atmosphere of Arrakis is the result of gaseous emissions by the sandworms.

To determine the size of Arrakis, we require several things: distances and some way of determining the overall size of the planet that works with those distances. Fortunately, both are provided in the novel.

During the early part of the book, House Atreides moves to Arrakis and takes possession of the planet from House Harkonnen. The Atreides determine that it is too dangerous to take up residence in the Harkonnen capital of Carthag due to the number of booby traps and Harkonnen agents left behind, so they fortify the smaller city of Arrakeen instead. At one point it is said that Arrakeen is located more or less exactly 200 kilometers from Carthag, which is a firm distance (just about the only reliable, hard distance between two landmarks given in all six books).

Extrapolating this onto the map provided at the start of the book gives us a firm scale, which is quite useful. The map is also useful because it gives us longitude lines but, more usefully, the latitude line for 60° N. With the scale in place, we can then measure exactly how far it is from one side of the 60° N line to the other, through the northern polar ice cap. This works out, quite nicely, at almost 1,800 km (1,118.46 miles) exactly.


Comparisons to Other Worlds
Utilising Google Earth Pro, it is possible to measure the distance from one side of the 60° N line to another on no less than three other worlds. These produce the following results:

These show that Arrakis is approximately one-quarter the size of Earth and half the size of Mars, and almost exactly matches the size of our Moon. This would seem to give us a firm and straightforward answer using solely the textual evidence.

Arrakis being the size of our Moon is, however, highly problematic. First off, our Moon is generally considered to have insufficient mass - and thus gravity - to hold down a thick, life-supporting atmosphere. The Moon's gravity is about one-sixth that on Earth, and a combination of low gravity and solar winds have stripped the Moon of whatever atmosphere if may have once possessed.

There is a workaround for this: Arrakis could be small but dense, with many rich metals located far below the planetary surface. This would also solve the issue that during the saga, no-one comments on Arrakis being a low gravity world, or bounces around as they should. Instead, Arrakis clearly has a gravitational field as strong as Earth's, or not far off (the novel actually provides a figure of 0.9g for Arrakis's gravitational strength).

Another apparent contradiction arises in the text: an early conversation between Paul Atreides and Thufir Hawat reveals that the storms on Arrakis build up over "six or seven thousand kilometers of flatlands" in the equatorial band. However, this is not as contradictory as it sounds: the Moon's equatorial circumference is 10,921 km, so if Arrakis is the same, it is perfectly possible for the Coriolis storms to build up. More to the point, this conversation may confirm Arrakis's small size. Mars's equatorial circumference is 21,344 km and Earth's is 40,075 km. If Arrakis was more their size, than Hawat and Paul should be discussing much larger stretches of desert than just six or seven thousand kilometers.

Another question is if Arrakis is large enough to even be called a planet. However, it is larger than Ceres, Pluto and all the other dwarf planets of our star system, and presumably large enough to have cleared its orbit of debris, which is our modern definition of a planet.

Some fans may prefer to suggest that the map in the novel Dune is not to scale, which would be a more helpful answer, but the presence of both latitude and longitude lines on the map suggests this is not the case and the map is indeed supposed to be to scale.

Based solely on the textual evidence, the planet Arrakis is a near-perfect match for Earth's moon in size, with an approximate diameter of 3,474 km, an equatorial circumference of 10,921 km and a surface area of 38 million square kilometers (14.6 million square miles), which is more than Africa (30 million square km) but less than Asia (44 million square km).

Thank you for reading The Wertzone. To help me provide better content, please consider contributing to my Patreon page and other funding methods, which will also get you exclusive content weeks before it goes live on my blogs. SF&F Questions are debuting on my Patreon feed and you can read them there before being published on the Wertzone.
Posted by Adam Whitehead at 12:54

The gravity of Arrakis is indeed a problem.
I've calculated the average density a planet(oid) of the size you mention would need in order to have 0.9 g surface gravity. (Calculation below* for those who are interested.)
Not surprisingly the value is high at 18.2 g/cm³. This is more than three times Earth's average density (5.5 g/cm³).
There are only 9 elements that even have a density of 18.2 g/cm³ or above. These are, in descending order of density**: osmium, iridium, platinum, rhenium, neptunium, plutonium, tungsten, gold, uranium
Three of them (Np, Pu, U) are radioactive; all of them are extremely rare***.
While Earth's densest part is the core which is thought to be mainly composed of iron (80%) and nickel (20%), Arrakis would have be practically entirely composed of these very heavy metals listed above.

In light of this, I don't think one can argue for a sufficiently dense Arrakis.
The real world explanation, I assume, is that Herbert simply didn't do the math. Arrakis either should be much larger, or have a much lower gravity.
Given the implications of the latter on story telling, I assume that Herbert would have opted for the former and either increased the value of Arrakeen's distance to Carthag or modified their location on the map to allow for a bigger planet.

*** Gold is the most "abundant" of these with 4 ppb in the Earth's crust; the others generally occur with in the Earth's crust with < 1 ppb. I don't know about their occurrence in the mantle or the core. One could imagine (I'm guessing, not being an expert) that there's a bit more to be found deeper down but even if there were one or two orders of magnitude more of these elements in the core it still would only be traces.

Well . . The planet from space does look like a sandy gold colored planet . . .

The other issue is that while we have our table of elements for what we have found here on Earth, what is out in the Universe is a completely different issue. Rare elements that aren't radioactive could be in abundance or elements we have yet to find, that are like gold or tungsten.

@Unknown: As long as we're talking about real-life science, what you say isn't the case.
Our periodic table is not just what we have found here on Earth, it was when it was first developed in the 19th century by Mendeleev. But in the past 75 years, not only have the very few gaps (such as technetium which doesn't have any stable isotopes) been filled but new elements have been artificially created beyond the elements that had been known to this time, see link below.
The current period table now extends up to element #118, oganesson.
And while there is something theorized called "island of stability", a region in the isotope map where there's a cluster of so-called magic or even doubly magic nuclei (see link below) it is not clear whether the theoretic model really holds up. The half-life of hassium-270 of 9 seconds is like an eternity compared to other elements in that region but still very short on geological scales.
Also, elements with higher nucleon count all have been produced in stellar processes (novae). There's no natural process that I'm aware of that would produce elements of atomic numbers > 118 in sufficient quantities to form macroscopic objects, even if we assume that the were one or several stable isotopes beyond oganesson.
So, I'm afraid that an entire planet made out of an "unknown element" is more the stuff of fantasy rather than science at this point.