For Buffy Summers, it's a strange sense of deja vu to see her sister Dawn starting high school at the newly-rebuilt Sunnydale High. Soon, however, an old enemy returns to Sunnydale and sets in motion a chain of events which threatens everything and everyone. Buffy has to become a leader as she never has before to stand against the threat, and the cost will be very high. 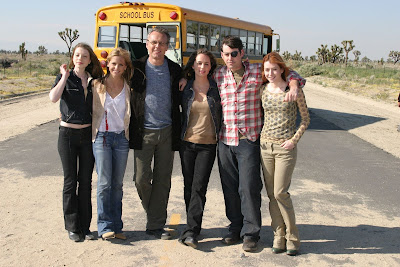 The cast of Buffy hit absolute rock bottom in the show's sixth season, a long and bleak journey from post-traumatic stress through self-realisation to catharsis via a lot of really bad relationship choices, several deaths and the world very nearly being destroyed. Season 7 opens with the fall-out from that season still being felt - Willow in recovery from her magic addiction, Spike trying to deal with his newly-acquired soul - but also with a bit of a back-to-basics feel.

There's a new Sunnydale High (unwisely built - in record time - on top of the old one and the Hellmouth) which Dawn is attending and where Buffy gets a job as a school counsellor, which is one of those genius ideas that the show proceeds not to do very much with. Early episodes of the season have a bit of a Season 1 feel, although this also includes, with the bemusing episode Him, an instalment that feels like Season 1 quality as well. The season is a bit rough in the early going with potentially solid story and character developments being undercut by filler episodes and some odd character choices, like reducing Spike to a raving loon for half the season and killing off fan-favourite side-characters for questionable story reasons.

The story does pick up with Conversations with Dead People, the season's best episode, in which characters are haunted by figures from their past (and yes, this episode bears more than a passing resemblance to Babylon 5's Neil Gaiman-written episode Day of the Dead) which leads to both character growth and also to pushing the main storyline on. By mid-season it's become clear that the true threat is an old enemy returning to destroy the world and the tension ratchets up a gear as Buffy assembles an army of new allies and older characters to face the threat. Spike also stops acting crazy, to everyone's relief.

Events then build to the epic season finale, taking in a few twists and turns along the way, including a memorable turn by Firefly's Nathan Fillion as a crazed evil preacher with superhuman (or subhuman) powers. This is all good stuff and it's a refreshing change of pace after the introspection of Season 6, although those who felt that in-depth psychological exploration of the characters in that season was a strength may be disappointed by the more obvious good-vs-evil struggles this season which dials back the intense character drama.

Buffy does at least stick the landing: the ending is thematically appropriate, rewarding for the characters and leaves the world on a good note, although some may bemoan a few perfunctory character deaths and a rather pointless apparent heroic sacrifice that had been undermined by news the character was moving to Buffy's sister show Angel. Beyond that, the ending and the final line are very nicely done.

Buffy the Vampire Slayer's seventh and final season (****) is a fine ending to the show. It's not the strongest season, but it does provide an appropriately epic finale to seven years of Slaying and it does give the show a nice coda. The season is available now as part of the complete Buffy the Vampire Slayer DVD box set (UK, USA).
Posted by Adam Whitehead at 19:45