Ahead of the release of Avengers: Endgame in a month's time, which will conclude both Phase Three of the Marvel Cinematic Universe and also conclude the storylines that have been building since the MCU launched in 2008, I will be rewatching all of the Marvel movies released to date, in some cases revisiting older reviews and in others issuing new reviews. Let's do this. 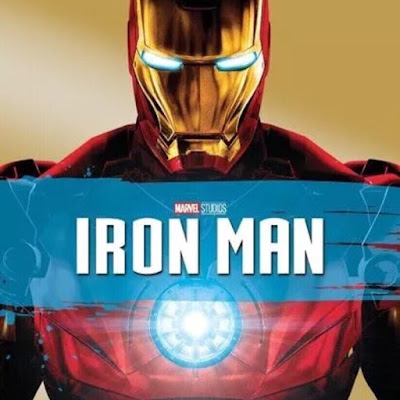 Stark Industries is one of the US military's most advanced and reliable weapons contractors, at least until its chief executive and resident inventor-genius Tony Stark is kidnapped by Afghan terrorists. Escaping with the help of a local translator - and a home-made cybernetic suit of immense destructive power - Stark sets about revamping his company's ethos, something that does not meet with the approval of his fellows.

Back in 2008, Iron Man was a simple knockabout popcorn flick which seemingly had no great ambition beyond being a fun superhero movie. Contrasted against the other big superhero flick of the year, the intense-but-overwrought-and-overlong The Dark Knight, it came off as breezy and fun, although it also risked being seen as lightweight and disposable. My initial reception to the film was that it was a mediocre flick that was single-handedly saved by some fine performances, most obviously Robert Downey Jr. but also Gwyneth Paltrow, Shaun Toub, Jeff Bridges and Terrence Howard providing able foils (Faran Tahir is distinctly under-used as seeming antagonist Raza though).

My other complaint was that the film was kind of stupid, with Stark building his first Iron Man suit out of leftover missile components in a cave in the Afghan mountains, which was less "unlikely" as "completely implausible." It may be my appreciation for cheesy comic book antics has increased in the meantime, but on this rewatch I found the development to be more forgivable, although the fact that the Afghan terrorists somehow don't cotton on that something is wrong despite having 24 hour video surveillance of what Stark is doing remains ridiculous.

Viewed on its own merits, Iron Man is much as it was in 2008: a fun, less serious and more lightweight superhero movie which is saved from being forgettable by some good laughs and Robert Downey Jr.'s relaxed performance as Stark, which is arrogant enough to make you initially dislike him but then charming and centred enough to make you care about his redemption arc. On this basis, the film works fine.

Of course, it is now impossible to rewatch Iron Man without being aware of the twenty (and counting) films that follow in its wake. It definitely disappears into the lower-middle end of the full pack of MCU movies, but it's fun to see the worldbuilding and scene-setting going on for later movies: Clark Gregg's presence as Agent Coulson (struggling to find a good name for SHIELD); Obadiah Stane's massive armour clearly being an inspiration for the later "Hulkbuster" suit; and of course the first post-credits sequence, which introduces Samuel L. Jackson as Nick Fury and foreshadows the formation of the Avengers. From such small seeds a huge legacy was generated.

Iron Man (***½) is a lot of fun, and is a more enjoyable in hindsight than I was expecting, but it's clear that Marvel weren't quite the finely-oiled machine they are now.


Note: the original version of this review was published in 2008 and yikes, I was pretty harsh on it. I must be getting soft in my old age.
Posted by Adam Whitehead at 20:59

It would be interesting after you have re-watched all the movies to see your list of how they all rank against each other.