The world of Umayma is still rocked by the ongoing war between the nations of Nasheen and Chenja. Former bel dame assassin turned freelance mercenary Nyx is still profiting on the sidelines of the war, slowly gathering a team of trusted associates to more effectively take on contracts, and hoping she doesn't get them killed in the process. 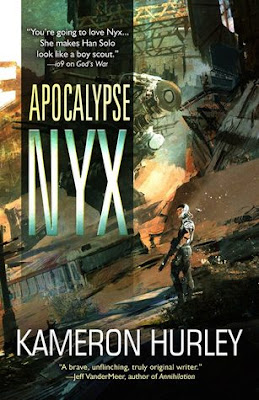 Apocalypse Nyx is a collection of five short stories (a couple approaching novella size) set in the world of Kameron Hurley's Bel Dame Apocrypha trilogy. The stories take place before the trilogy (God's War, Infidel, Rapture) and serve several functions, including being an origin story for several of Nyx's associates. Interestingly Nyx herself doesn't get such backstory, perhaps as the novels told that story well enough or because Hurley is holding onto that story for another time.

Instead, we get the stories of how Khos and Anneke join the team, how the team operates together, why Rhys stayed with them for so long and the sort of small jobs that keep the team ticking over between the more epic events of the novels. It has to be said that these are all splendid. Like the trilogy, these stories feel like a pint of science fiction mixed with a pint of fantasy and washed down with absinthe. The stories brim with attitude and verve, even moreso since Hurley can set up and resolve the story in a few dozen pages rather than across hundreds.

There aren't too many problems as such, although those who enjoy short story collections for variations in tone may be disappointed: the collection retains the same bloody-minded attitude as the novels, with a fair amount of violence, mayhem and adult content. The short length of the stories does allow for a sharper focus though, and the stakes are correspondingly a lot lower. It's interesting to see how readily Nyx hits the self-destruct button when the team are tasked with a simple data retrieval mission, perhaps explaining how she reacts when the fate of the nation/world are at stake in the trilogy.

The most successful story is the last one, "Paint It Red", where Nyx is offered the chance to join another team of mercenaries. The idea of not being in charge and not having responsibility appeals to Nyx, but soon she discovers the price of working for a team whose morality is a lot more compromised than her own. The reader realises that Nyx, for all her myriad faults, has a sense of fairness and honour that sets her apart from others of her kind, and makes her ultimately a protagonist worth rooting for.

Apocalypse Nyx (****½) is a fine collection of razor-sharp, bloody-minded tales from one of the most interesting voices in modern genre fiction. It is available now in the UK and USA.
Posted by Adam Whitehead at 21:31