Tony Stark has revealed to the world that he is Iron Man, which has led to a huge amount of publicity and fame, but it has also led to criticism by corporate rivals and repeated attempts by the US government to seize his technology for their own use. As Stark fends off legal troubles, he also faces a new threat from a former ally of his father's. 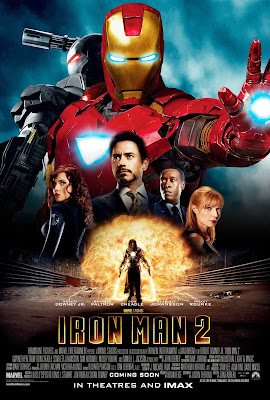 Iron Man 2 is the very definition of a standard Hollywood sequel. It's bigger, brasher and noisier than its forebear, operates on a larger scale and clearly has more money running through it. There's more explosions, more Iron Man suits, more shout-outs to the wider Marvel universe and, well, more stuff going on.

What it isn't, necessarily, is more fun. The original Iron Man was entertaining and breezy, although lacking in real story or character depth. Iron Man 2 feels perfunctory and also perhaps a bit too overstuffed at times. There's a lot of shout-outs to Thor (which takes place simultaneously with this movie), SHIELD and Nick Fury have a larger presence and the movie spends some time setting up the character of Black Widow. The net result of this is that erstwhile villains Ivan Vanko (a effective but clearly unchallenged Mickey Rourke) and Justin Hammer (an entertaining but entirely nonthreatening Sam Rockwell) spend most of the movie off-screen. The Marvel "villain problem" is clearly a major issue in this film, with most of the time spent fighting unmanned drones rather than the actual bad guys, who are rather quickly disposed of and don't have much to do.

What the film does do, surprisingly, is dedicate a significant amount of time to Tony Stark's mental state and his character development as he strives to be a better person and face his own mortality, eventually overcoming it, recognising his weaknesses and becoming a more effective leader, setting up his role in The Avengers. This is something the film does quite well - maybe to the point of spending too much time on it - and better than I think the film is often credited for. Iron Man 2 is arguably the closest we get in the MCU to seeing what these characters are doing in their down time when the world isn't under threat of imminent annihilation.

The result is that Iron Man 2 (***½)  a bit of an oddball movie. The villains are decidedly non-threatening and the film is more concerned with the characters' internal lives and relationships than with heroics. But that's also something of a strength, especially given the strength of the cast. The result is a movie that's less straight-up fun than its forebear, but balances that out with stronger characterisation and better worldbuilding.
Posted by Adam Whitehead at 21:22

You've been far more lenient on this and The Incredible Hulk than I would have been! For me they are the weakest films in the MCU, and earn 2* ratings at most.

Thinking back on these movies I'm surprised how mediocre I find the vast majority of them. Always fun, but never more than that. The only ones that I think delivered more than that are The Avenger, Winter Soldier, and Infinity War.

I have been meaning to do this for ages. I have such amazing memories from the MCU. How many hours will I need in total?