Fallout is to - finally! - make the transition to tabletop rolepaying. The venerable video game franchise, which turns 22 this year, started life as a homebrew game played by the team at Interplay using the GURPS rules system before became a video game, so this is a sign of the franchise going full circle.

Two products are in development by Modiphius. The first is an expansion to Fallout: Wasteland Warfare, the tabletop miniatures wargame released last year. This expansion will provide context for the battles in the game and uses a rules set modified from the miniatures game. It sounds like this product is aimed at those who favour using miniatures in their games. The expansion will be released in summer 2019, with a special boxed set containing both the expansion and the Wasteland Warfare starter set will follow at Christmas. 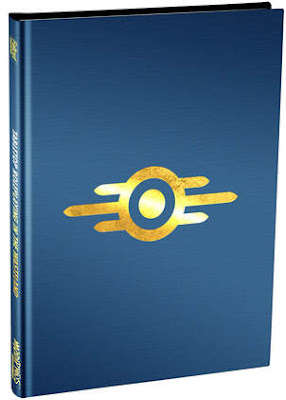 The second product is a stand-alone Fallout RPG which will use the 2d20 rules system used for Mutant Chronicles, Star Trek Adventures, Conan and John Carter of Mars, among other products. This will launch in 2020 with an initial rulebook followed by expansions.

This is positive news. Fallout has a rich setting and impressive lore, and it's way past time that a tabletop roleplaying version was available.
Posted by Adam Whitehead at 20:54

There have been versions of this for a long time. Some folks at Interplay introduced an official version way back when, and there were some really good fan made versions with active communities in the early 2000s (like "The Project"on Vault13.net and their own sites).

Those were some really fun times to be a Fallout fan.