Since leaving the Tombs of Atuan more than twenty years ago, the former priestess Tenar has found a new life and a new family on the island of Gont. When her husband dies and her son goes to sea, she finds herself alone. When an injured child comes into her care and the wizard Ged returns to his home island after an arduous journey, Tenar finds her life changing once more. 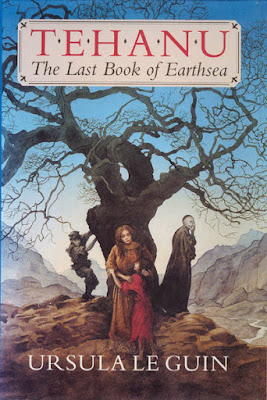 Tehanu is an unusual book. It is the fourth novel in the Earthsea series but it is very different in tone and content to the original trilogy. It is a quieter, more reflective book, less concerned with adventure than it is with the musings over the value of life, love, freedom, motherhood and responsibility.

The book focuses on Tenar, the main character of The Tombs of Atuan, the second book of the series. We learn that, despite the romantic tension between her and Ged, they never realised that affection and instead went their different ways, Ged rising to become Archmage of Earthsea (as seen in The Farthest Shore) and Tenar choosing a quiet life as a farmer's wife, despite being given the opportunity to live in luxury in Havnor or learn the ways of magic from Ged's old tutor. The book sees Tenar reflecting on her decisions, mixing satisfaction with raising two children well with regrets that perhaps she could have made other choices.

In this sense the book is about the hesitancy of middle age, when one is still young enough to find a new career or relationship or path to happiness, but old enough for some weariness and cynicism to set in. Tenar and Ged are now mature adults rather than the callow youths of their first meeting and now have to ask some serious questions about how they are going to spend their latter years.

The book is reflective but not devoid of incident. A forbidding enemy has arrived on the island and Ged and Tenar have to face down and defeat him. Dragons are seen and magic is performed. But Tehanu is not an epic fantasy novel of action and sorcery and explosions, but a book that uses fantasy to explore the common, human condition. On that level it is reflective and melancholy, but powerfully and beautifully written.

Tehanu (****½) is an introspective, quietly powerful fantasy novel. It is available now in the UK and USA as part of The Books of Earthsea omnibus edition.
Posted by Adam Whitehead at 14:37

Reading this now, and am enjoying the book, and the series, overall :)

I love most books by Le Guin, but this one was really awful. I wouldn't even finished it if it was not written by my favourite author. I would give it a one star at most.

A well-judged review. The most mature, even profound, of the Earthsea books, and often very moving.