Amazon have confirmed that the Lord of the Rings TV series will be set in the Second Age of Middle-earth's history and tweeted a final update to their map series which adds the island of Númenor, which is only present in that epoch of history. This also confirms that Amazon has secured the screen rights to Unfinished Tales, as the map of Númenor and its place names are all copyrighted as part of that book. 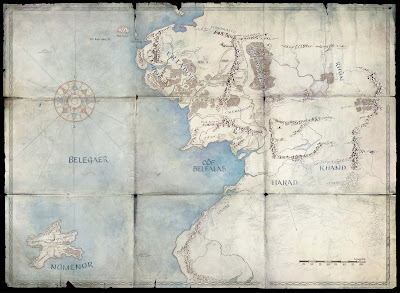 J.R.R. Tolkien divided the history of his world, Arda (actually an imaginary version our world in an ancient, prehistorical time), into several epochs. Spanning tens of thousands of years were the Sunless Ages, known as the Age of Darkness, Age of the Lamps, Age of the Trees etc. The numbered ages began with the creation of the Sun and the awakening of the race of Men in Middle-earth. The First Age, which lasted a mere 600 years or so, was dominated by the War of the Jewels, the desperate battle by the Noldor elves and their dwarven and human allies against the dark power Morgoth fought to regain the Silmarils, the greatest creations of the elven smiths. At the end of the war Morgoth was defeated, but at great cost, including the destruction of the subcontinent of Beleriand in far north-western Middle-earth where the war was fought.

The Second Age saw many elves depart for the uttermost west, but those who remained forged new alliances and kingdoms in Middle-earth. In recognition of their bravery, the greatest human warriors and fighters, the Edain, were blessed with their own homeland, a great island named Númenor raised by the godlike Valar from the depths of the ocean. For a time peace reigned, but disquiet returned thanks to the machinations of Sauron, a servant of Morgoth who had escaped imprisonment or destruction. Sauron went in disguise among the elven-smiths of Eregion and tricked them into forging the Rings of Power. Using their knowledge, Sauron then forged the One Ruling Ring by himself as a means of controlling all the others and dominating Middle-earth. He then made war upon the elves of Middle-earth.

From the sequence of maps posted by Amazon, it appears that the series will cover a number of important events during the Second Age. Possible time periods could include the initial visits by the Númenóreans to the coasts of Middle-earth in the 800th year of the Second Age (due to the prevalence of forests on the maps, before they were cut down by the Númenóreans to build their ships); the forging of the Rings of Power c. 1600 SA; the War of Sauron and the Elves in 1695-1700 SA; the Downfall of Númenor in 3319 SA; and the War of the Last Alliance in 3428-3441 SA. More intriguing is the possibility that the series will cover all of this material, jumping forward centuries at a time and using immortal characters like Elrond and Galadriel to anchor us whilst the human cast keeps changing.

Hopefully Amazon will confirm more about the series soon. Production of the Lord of the Rings TV series is expected to begin by November at the latest to debut in 2021.
Posted by Adam Whitehead at 18:28

Neat! After your previous article speculating about this, I found an old paperback (1988 printing) of Unfinished Tales, and started reading it at Part Two, the Second Age. It's slow going, but I'm really enjoying it. I had only read through the Silmarillion before.