Computer programmer Thomas Anderson, who sports the hacking alias "Neo," is contacted by the mysterious Morpheus, a hacking paragon who offers to share with him information about a rumoured computer network known as the Matrix. Evading detention by sunglasses-wearing Agents, Neo meets Morpheus and learns the truth: the entire human race has been enslaved by advanced AIs to be used as batteries to power their systems. The Matrix is a computer simulation of the past, used to keep humans unaware of their true, nightmarish existence. Morpheus offers Neo the chance to escape the dream and help bring about the liberty of the human race. 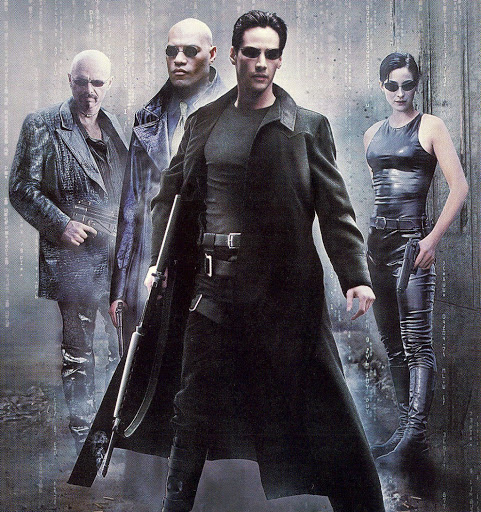 Released in 1999, The Matrix rapidly became one of the most highly-acclaimed science fiction action films of its era. Its impact was heightened by the perceived disappointment of that year's Star Wars film, The Phantom Menace, and the fact that at the time of its release a number of other films (such as Dark City, eXistenZ and The Thirteenth Floor) had been recently released tackling similar themes but had failed to make much impact. The Matrix struck gold with a more high-concept, simply-relatable premise (what if our lives are an illusion?), a large number of impressive action scenes, some intriguing-if-shallow philosophical asides on free will and an extraordinarily great cast, particularly the impressive find of the then-unknown Carrie Ann Moss and rising talent Hugo Weaving, as well as hugely career-boosting turns from Keanu Reeves and Laurence Fishburne.

One of the reasons The Matrix works is the idea it borrows from various Hong Kong action cinema and Japanese anime movies, namely the fact that the action is justified by the plot, as are the increasingly insane stunts, action set pieces and martial arts on display. For once, implausible action scenes, balletic martial arts scenes and frenetic gunplay is justified by the hyper-real setting of the Matrix itself, and the ability of both the Agents and Morpheus's band of rebels to twist the simulation to their own benefit.

The Matrix is also helped by its challenging budget. This has been overstated a bit over the years - $70 million in 1999 was still a solid sum of money (comparable to the budget of Independence Day three years earlier) - but the budget was still relatively low given some of the ideas and concepts that the Wachowskis wanted to pull off, forcing the effects team to consider low-fi solutions to problems (such as doing most fight scenes in-camera with the actual actors suspended on wires) given the limited amount of CG they could call upon. This gives the film a lot of credibility with the actors often undertaking their own stunts, allowing impressive close-ups even mid-fight.

From a philosophical viewpoint, the film muses on various real-world influences such as Jean Baudrillard's Simulacres et Simulation (Baudrillard found the film's understanding of his ideas to be flawed) and elements from Descartes, Kant and Taoism. The film uses these ideas somewhat clumsily - expression and economy of dialogue is clearly not a priority, as evidenced during lengthy exposition scenes from Morpheus - but in doing so it brought them to a much wider audience and inspired newer ideas. The central concept in the film, that reality is not real by a computer-generated illusion, was later expanded on by Nick Bostrom in his 2003 simulation hypothesis.

However, the real success of The Matrix is in its establishment of a new world and mythos that is interesting and engaging, if not hugely convincing in this film (the two sequels and, more successfully, the animated spin-off project The Animatrix expand and explore on elements that feel under-explored here). The notion of the machines using humans as batteries rather than, for example, far more cost-effective geothermal or nuclear energy is a bit preposterous until The Animatrix reveals that it was humanity's repeated aggression against the AIs, who initially only wanted peace after achieving sentience and independence, that led to the AIs decision to enslave humanity and use them as a fuel source out of both a need for revenge but also a humanitarian reluctance to fully wipe out their creators.

Twenty-one years on from release, The Matrix (****½) remains a highly watchable movie. The action is convincing and impressive, the cast is magnetically engaging and help overcome an occasionally clumsy script, and the philosophical ideas and allusions add intelligence (or at least a veneer of it) to the SF action adventure mix. The film is available as part of a box set with its two sequels in the UK and USA.

Email ThisBlogThis!Share to TwitterShare to FacebookShare to Pinterest
Labels: the matrix, the wachowskis, wertzone classics