1999. The new millennium was approaching, the Cold War had ended, it was a time of unparalleled optimism and glorious hope for the future. Ruined, some (with perhaps a loss of perspective) say, by The Phantom Menace. 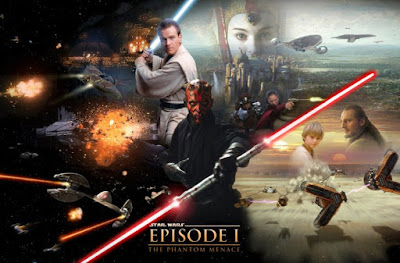 The first film in the prequel series to George Lucas's classic original Star Wars trilogy has had much opprobrium poured over it through the years. It's been appraised, reappraised and analysed far more than a film of its quality really deserved, to the point where it's difficult to sit down and watch it without it buckling under the weight of a decade and a half of scorn.

It's certainly not a great film. It suffers from an extremely clunky and unappealing opening sequence in which the Trade Federation (which we neither know nor care about) invades Naboo (a planet we neither know nor care about) because of tax and trade disputes (which no-one cares about) and a pair of Jedi (one of whom we kind of know) rescue the planet's queen (whom we only know or care about - back then anyway - because she was awesome in Leon) and spirit her away to Tatooine, where suddenly The Plot actually kicks in and we meet Darth Vader, except he's a ten-year-old kid who drives flying Formula One cars. They then go to Coruscant (which we only care about from a decade's worth of mostly great tie-in novels), get General Zod fired from his job ruling the universe, discover that Yoda in his heyday was actually quite annoying and then fly back to Naboo and beat up the Trade Federation with the help of a bunch of frogs led by Brian Blessed.

As plots go, it's weird, bitty and full of episodic chunks which completely fail to connect to one another with any real coherence. The events on Tatooine, based around our heroes trying to repair their ship, gambling on a highly improbable race outcome, trying to scientifically quantify the Force and finding out that Darth Vader built C-3PO (what?), feel completely isolated from the rest of the movie in particular. The resolution is also pat, convenient and implausible in the extreme.

The movie also fails quite spectacularly in its primary goals of either 1) providing interesting or relevant backstory for the films we've already seen or 2) providing a compelling alternate starting point for newcomers to the franchise. In particular 2) is a problem because The Phantom Menace is weak enough that it has put people off from proceeding any further with the series.

It's not a total disaster. As a live-action cartoon for kids, it's actually fairly inoffensive. The actors give their best with some disastrous material, but Liam Neeson in particular does sterling work by adopting an authoritarian but stubborn rebel streak for Qui-Gon Jinn. It's a difficult acting choice to pull off, but he does it reasonably well and even succeeds in providing a few of the film's more amusing moments through subtle scenes such as where he is stymied by Watto, the film's most successful CG alien creation (the fact he's presented as a humourous, somewhat sympathetic character with a genuine emotional care for Anakain whilst also being an unrepentant trafficker in human slaves hints at a moral complexity that is never fully explored). Most of the other actors are considerably less able to meld their formidable acting skills (in the case of Ewan McGregor and Natalie Portman) to Lucas's often terrible lines. Ian McDiarmid takes the valid - if increasingly irritating over the course of the trilogy - alternate path of simply hamming things up in every scene he's in.

The film is also surprisingly well-paced. It moves fairly fast, packing in quite a lot of plot (if partially nonsensical) and characters (if mostly underdeveloped) into two hours. Even if a scene doesn't work, it usually doesn't go on long enough for it to be a major problem. This is every much not the case with the two films that followed them, particularly the interminable "romance" and "action" scenes in Attack of the Clones which are so numerous and lengthy that they become genuinely emotionally traumatising. There's also the phenomenal visual design of the film, from sets to spacecraft (mostly still models at this stage) to sets to creatures. The designers achieve the near-impossible task of creating a new, more pristine aesthetic within the Star Wars universe established by three older films, two animated series and numerous books, and making it work.

Then there's the music. John Williams creates a whole new soundtrack which is genuinely epic and stirring, particularly his "Duel of the Fates" during the movie's climax. This melds well with the lightsabre duel between Darth Maul and the Jedi, one of the better action sequences in the entire series (the pod race, for all its implausibility, is another). The minimalist approach to Darth Maul as a villain, in stark contrast to the overblown, overlong pomp elsewhere (see the frankly unnecessary number of "Darth Sidious talking smack over a holoprojector" scenes), actually works very well and is an approach Lucas should have used elsewhere.

None of this can save The Phantom Menace from its weaknesses, but in many ways it's a better movie than either of its immediate successors. Indeed, if you can mentally switch off Jar-Jar Binks (who is actually in a lot less of the film than you may recall) or find The Phantom Edit version of the movie, it arguably emerges as the best of the three prequels thanks to Neeson's excellent, grounded performance, the musical score and some of the more well-judged action sequences in the series.

The Phantom Menace (**½) is available now as part of the complete (but soon not to be) Star Wars Saga box set (UK, USA).
Posted by Adam Whitehead at 01:09

Pretty much in accord with my view on the film, with the exception that hammy Ian McDiarmid _never_ gets old, and is one of the only re-watchable bits of AOTC and ROTS.

I agree with the notion that this is the best of the prequels. While it’s not good, it has the best written dialogue of the three. It also has the best shot action scenes, the other two suffer from too many close ups.

Maybe I missed this, but how exactly does Watto show genuine emotional care for Anakin?

The Anti-Cheese edits of all three prequels (Jeremy West's channel on Youtube) are excellent salvage jobs of the films. Risible dialogue has been pruned down and there is some clever use of Jar-Jar and the Nemoidians.