Kevin Bacon is helping to relaunch the Tremors franchise as a TV series. This will mark his first involvement with the franchise since the original film in 1990, which will allow him to Six Degree himself across the same series. 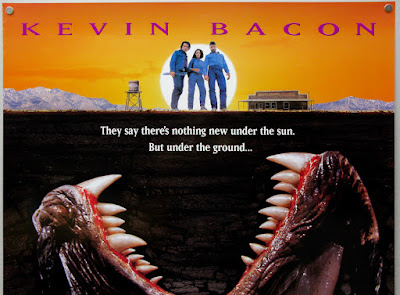 Tremors, objectively one of the Greatest Films Ever Made™, featured the inhabitants of the small town of Perfection being menaced by subterranean "graboids", ferocious burrowing monsters. The original film pitted a cast of characters led by Val McKee (Bacon), Earl Basset (Fred Ward) and Burt Gummer (Michael Gross) against the creatures. Ward would return for the sequel, Tremors 2: Aftershocks (1996) but only Gummer would go on to appear in every appearance of the franchise, which to date comprises five films and a short-lived 2003 TV series.

The new TV series will apparently reboot and reintroduce the franchise, but with Bacon reprising the role of Val McKee 25+ years after the original film, it would appear to be set in the same continuity. How many other actors or characters would reprise their roles is unknown.
Posted by Adam Whitehead at 20:19

Email ThisBlogThis!Share to TwitterShare to FacebookShare to Pinterest
Labels: kevin bacon, this will probably suck but you never know, tremors

I loved the TV show. It was hilarious.

Why? The Tremors sequels and TV show were total crap. I know Hollywood is running out of ideas but why Tremors? There are surely properties out there far more deserving of a launch/relaunch than Tremors!