A History of Epic Fantasy - Part 27

Summing up what epic fantasy is and is not is difficult. The barest tropes of the genre - big armies, travelogues, magic - can be used to define it, but it always feels like it's describing the symptoms and not the causes of why people write the genre, and why people read it. One potential definition is that epic fantasy is the story of big events channelled through the eyes of a small number of well-defined characters whom the audience invests in. 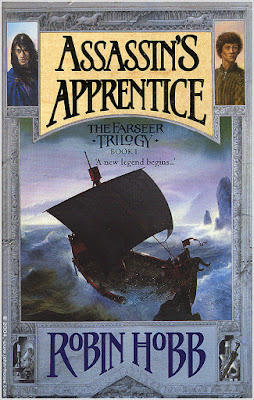 Or to put it another way, we may be interested in Middle-earth as a place and a collection of societies, but we only get interested in it through the actions of characters we empathise with: Bilbo, Frodo, Gandalf, Gollum etc. The same with Westeros. The war for the Iron Throne is irrelevant if the reader does not care about Ned Stark or Tyrion Lannister or Daenerys Targaryen. Arguably epic fantasy can go off the rails when the scope balloons and so many characters are brought in that the tension and pace can become diffuse, a problem struggled with by many of even the best and most critically lauded authors in the genre. This tension between the macro and micro-scale, between the personal stories of characters we love and the epic struggle of clashing armies and gods and philosophies, arguably lies at the core of the appeal of epic fantasy and how different authors approach it can determine their success. It often feels like fantasy authors, when in doubt, move in favour of the massive, epic scale and throw so many new ideas, new characters and new magic systems into their narratives that they can risk overload or crashing the momentum of their series.

In 1995 a novel was published which firmly tilted in the opposite direction, where big things happened but the perspective was tightly limited (at least for most of the books). This gave rise to one of the biggest-selling, most critically lauded and respected fantasy series of the last fifteen years: The Realm of the Elderlings mega-sequence by Robin Hob.

Of course, it didn't start out that way. Margaret Astrid Lindholm Ogden had published her very first novel, Harpy's Flight in 1983. By the early 1990s she'd been writing novels for ten years and had released ten books in the adventure fantasy field (and also a single SF novel, Alien Earth). These had been released under pen-name, Megan Lindholm. In July 1993 she concluded a deal with Bantam for three further books, this time an epic fantasy trilogy. The first volume at this point had the working title Chivalry's Bastard.

By the time the book was completed and delivered, the author and her publisher agreed it was a very different kind of novel for her. It was longer, more complex and much more adult. It was decided to remarket the novel as coming from a new author. She picked the name "Robin Hobb" after discovering that the "H" row was often on a perfect eyeline for an adult browsing the shelves in a bookstore.

Retitled Assassin's Apprentice, the novel was released in April 1995 and was immediately successful. Two heavyweight fantasy artists - Michael Whelan in the United States and John Howe in the United Kingdom - provided excellent covers. Reviews were very strong. The book was fairly traditional, focusing on the character of Fitz, the bastard son of the king's heir who is reluctantly allowed to live in the royal household but finds himself at something of a loose end. He is trained by the royal assassin, Chade, and uncovers political intrigue with his half-uncle Regal seeking to usurp the throne, the Six Duchies facing attacks by the mysterious Outislanders and relations with the Mountain Kingdom being strained. Royal Assassin (1996) and Assassin's Quest (1997) continue and resolve these issues, the three books together forming The Farseer Trilogy.

However, although the books feature political intrigue, two magic systems (the Skill and the Wit) and occasional bouts of violence, their popularity rested on a series of relationships: between Fitz and his wolf, Nighteyes; between Fitz and his mentor Chade, and his uncle Verity; and, most tantalisingly, between Fitz and the highly enigmatic Fool. The trilogy ended on a positive note, but Fitz did not seem to have truly found happiness at its conclusion. 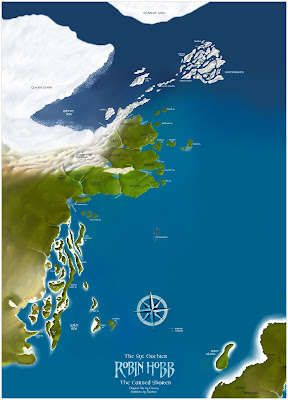 Robin Hobb went on to write The Liveship Traders (1998-2000), a further trilogy set in the same world but along the coast of the continent to the south. This trilogy focuses on the families of Bingtown, who have developed the ability to carve ships controlled by sentient figureheads. Initially the books revolve around the battle within a family for ownership of the liveship Vivacia, but as the narrative unfolds the scope expands. Unlike the Farseer series, which was written in first-person, Liveship is written from a more traditional third-person viewpoint and encompasses a wide range of characters living in different locales. This trilogy features more compelling and original worldbuilding than Farseer, which is very traditional, but also is notable for giving the primary villain a journey and arc of his own that is understandable and sympathetic. Indeed, Hobb arguably is too successful in making Kennit a relatable figure and the decision to have him revert to pure villainy by becoming a rapist feels heavy-handed. But overall The Liveship Traders is as strong and readable a series as its forebear, benefiting from the shift in location and theme.

Hobb returned to Fitz's story in The Tawny Man (2001-03), which followed up on his adventures fifteen years after the events of Farseer. More intriguingly, it touched on events in The Liveship Traders and started pulling together story threads revolving around the Liveships, sea serpents, dragons and the extinct race of mysterious Elderlings, providing a larger-scaled and more mythic backdrop for the series. However, the focus remained resolutely on the key characters.

Hobb took a break from Fitz's world to write the Shaman's Crossing trilogy (2005-08), set on a completely different world with gunpowder. Although well-regarded, it wasn't as successful critically as her Elderling mega-series. She subsequently returned to the setting of the Rain Wilds, touched on in both the Farseer and Liveship story strands, for a four-volume series expanding on that region, The Rain Wild Chronicles (2009-13). This led Hobb to write Fitz and the Fool (2014-17, est), a new trilogy continuing (and perhaps wrapping up) the story of Fitz and his enigmatic friend, now emerging as arguably the central figure of the entire saga. 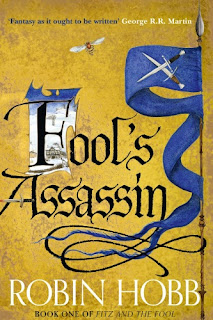 The Robin Hobb books feature all the hallmarks of epic fantasy, but her prose and dialogue style are a marked improvement over much of the genre and her focus on character over the furniture of the setting is highly laudable. Her approach is also hugely appealing on a wide level. Her books were Harper Voyager's biggest-selling series until A Song of Ice and Fire overtook them in the early 2000s, and she has enormous respect from her peers. Authors as different as George R.R. Martin and Steven Erikson are big fans, and The Telegraph even called the first book of the Fitz and the Fool sequence "High art." If the books have a weakness it may be a traditional one: excessive verbiage with the streamlined opening volumes of both Farseer and The Liveship Traders being dwarfed by the concluding volumes of each trilogy (each almost double the size of the first), and the Rain Wild Chronicles expanding almost uncontrollably from a duology to a four-volume series.

But at her best Robin Hobb is one of the most human and humane writers in the field, writing intelligently and with clarity about people and what makes them tick, whilst also remembering to throw in the requisite fantasy cool stuff like dragons and sentient sailing ships.


By the end of the 1990s the genre's success appeared secured through the arrival and establishing of a new breed of epic fantasy authors writing with greater skill and interest in characters and people, whilst also being more willing to delve into the darker side of the genre. But a parallel subset of fantasy was also developing which wanted to turn over all the rules and do something really different. Really...weird.
Posted by Adam Whitehead at 16:06

The original Farseer is still one of my all time favorites! You're spot on when you identify the relationships as key.

However, I've always thought that one of the most interesting relationships is between Fitz and Burrich. Fitz and the Fool have always gotten all the attention, but to me that is the most difficult to identify with.

This article touches on why I could never get into our really enjoy the Malazan books: I didn't care about what was happening because the characters were either ciphers or unlikable.

As much as I agree with most of what you write, Wert, (and count me in among those who praise your series of essays) I cannot share your view on magic - or maybe I understand you wrong.
In this installment you count "magic" as one of the [defining] tropes of epic fantasy alongside big armies and travelogues. In an earlier installment (part 25 which focused on Harry Potter) you called magic "a stalwart feature of epic fantasy".
While magic undoubtedly is to be found in epic fantasy it is hardly confined to this sub-genre! I'd say that magic (in a broad sense) is one of the defining features of fantasy in general, not epic fantasy. Heck, sword-and-sorcery, a sub-genre that is clearly not identical with epic fantasy, bears magic in it's name!

Good article. One minor error I noticed though: my copy of the first volume of the Liveship Traders series is about 100pp shorter than the final volume - not really almost half its size.

Hobb is a good writer but she's never been able to seal the deal with me. Like Kate Elliot, another writer who's skill I admire, they're able to captivate me but not keep me. I usually love the first book, then I grow disenchanted with later volumes of the series.

It might be plot-related or maybe even the development of the character doesn't go the direction that satisfies me.

All three are good at worldbuilding and dialog. None are bad writers. That's why on reflection, I think the Hobb plot just didn't hold me.