BATTLETECH smashes Kickstarter targets, will be released in 2017

Harebrained Schemes have succeeded in their latest Kickstarter campaign, this one designed to bring a new video game based on the BattleTech franchise to life. 41,733 backers pledged $2,785,537, far exceeding its original target of $250,000. 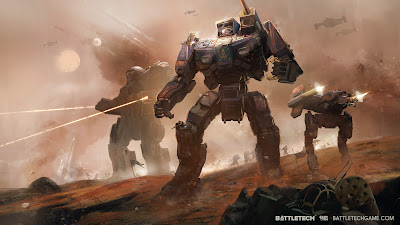 Based on the BattleTech miniatures wargame, the new video game sees hulking battlemechs fighting it out for supremacy across a turn-based battlefield. The game will see players controlling multiple mechs and managing heat, ammunition and damage as they try to overcome the enemy. The game will feature a single-player campaign with a reactive, freeform story unfolding over many battles. The game will also feature a comprehensive multiplayer mode.

BattleTech will be released on Windows, Mac and Linux in 2017.
Posted by Adam Whitehead at 20:21