R. Scott Bakker has provided an update on his forthcoming books. He has confirmed that the final book in the Aspect-Emperor series has been split, as was anticipated from Overlook Press's schedules a few weeks ago. 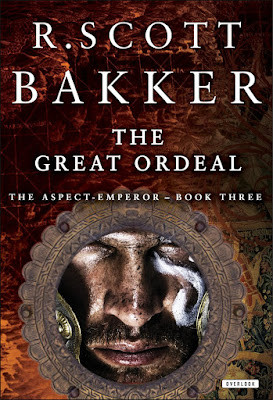 The first of the two books, The Great Ordeal, will be published in July 2016. The second, The Unholy Consult, will be published at some point in 2017. Apparently the expansion of the series from three to four volumes necessitated a redrawing of the some of the contracts.

In previous comments, Bakker confirmed that his intention is still to write a further duology in the world but that, at a push, the series can end with The Unholy Consult.
Posted by Adam Whitehead at 14:24

Email ThisBlogThis!Share to TwitterShare to FacebookShare to Pinterest
Labels: news, r. scott bakker, the aspect-emperor, the great ordeal, the prince of nothing, the unholy consult

I have a pretty good idea of what that last part means (it can be an ending even if it's not the ending), even if it's just guesswork until we get the final book.