The television adaptation of Bernard Cornwell's Saxon Saga, The Last Kingdom, is currently doing very well for the BBC and BBC America. However, news has been revealed that arguably his most critically-acclaimed work, The Warlord Chronicles, has been optioned as well. 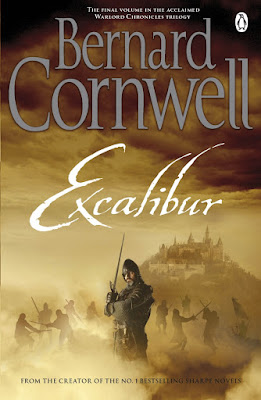 Bad Wolf Productions, a new venture headed by ex-BBC executive Jane Tranter and producer Julie Gardner, has optioned the novels and is looking to develop them for television, possibly alongside their new American partner company, HBO. The same team are behind the His Dark Materials TV project for the BBC, announced today.

The Warlord Chronicles consists of the novels The Winter King (1995), Enemy of God (1997) and Excalibur (1998). The trilogy retells the Arthurian legend, but in an unusual way. The books are set in the realm Britain of the late 5th and early 6th Centuries, when passions and tensions are running high between the descendants of the Roman conquerors, the native British kingdoms and the invading Saxons. The books depict Arthur not as the King of Britain, but as the bastard son of the High King Uther Pendragon. After (spoilers!) Uther's demise, Arthur is named Warlord of Dumnonia (Camelot), the regent for the throne until his nephew Mordred is old enough to rule, a responsibility that Arthur takes seriously despite the claims of his enemies that he seeks to usurp the throne. The books also depict a Britain being torn in religious strife between the pagan druids, led by their high priest Merlin, and the spreading forces of Christianity. Arthur, who instead follows a Roman mystical warrior tradition, attempts to stand neutral between them but with mixed results.

The trilogy features as its protagonist Derfel Cadarn, a young man who grows up in the royal household. Although he has his own storyline, he also serves as an independent witness for many of the events of Arthur's time and is later made a member of the Knights of the Round Table. The story is also being told in flashback by Derfel as he writes down his experiences for historians, only to his horror see them being corrupted into the flashier and more exciting version of the story known in the legends (Excalibur, for example, not being remotely magical in reality).

The trilogy has been high acclaimed for its strong narrative drive, its fresh interpretation of a familiar story and its use of the real historical situation (or at least what we know of it) to create a convincing story based in politics, religion, warfare, strife and lust.

According to Julie Gardner:


"[Bernard Cornwell] is a great storyteller as we know from everything from ‘Sharpe’ to ‘The Last Kingdom. He has a very innovative way into the Arthurian stories, which is to take an ordinary man who by work, chance and life is an observer and an intimate in the relationships of Arthur, Lancelot and the key characters that we know."

Hope this happens. Loved the books.

Love Cornwell and love King Arthur tales. Have to read these books now! Very please it's getting screen treatment! Squeee!

HBO would be great but the BBC butchered the Last Kingdom, watched one episode then binned it.

Exactly what samain11 said. HBO to produce this with the same budget as Rome, with Bernard Cornwell and Nikolas Lloyd (Lindybeige) as advisers on set.

has there been any update on production?

Bad Wolf Productions optioned three projects and put the first two into production in a cycle. Assuming the same holds true, WARLORD CHRONICLES should be up next and there should be some kind of update on that next year.