A video game development studio by the name of Night Dive have acquired the full rights to the System Shock IP. Night Dive recently masterminded the re-release of System Shock 2 and have now confirmed that a "full remake" of the original game is underway. 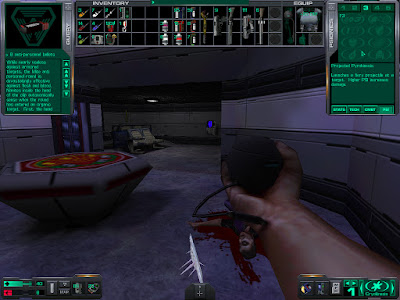 Night Dive have also acquired the property in its totality, so can also begin planning a System Shock 3 if they wish. However, they admit this is beyond their current scope and would have to partner up with another company to undertake that project.

System Shock (1994) was a first-person science fiction roleplaying game, set on a space station. The player controls a hacker who becomes embroiled in the machinations of a devious, sentient AI called SHODAN. It was created by Looking Glass Studios under the supervision of the legendary Warren Spector (who later created Deus Ex), shortly after the same team had completed work on Ultima Underworld II. System Shock, like the Ultima Underworld games, was praised for bringing the immersive 3D viewpoint of action games like Doom but creating a more thoughtful, intelligent RPG around it.

In 1999 Looking Glass Studios and Irrational Games (headed by Ken Levine) collaborated on System Shock 2. This was a more sophisticated game in terms of graphics, interface and the amount of freedom it gave the player to pursue their own goals. It frequently appears on "Best Games of All Time" lists and it is considered extremely influential on later RPG design. SHODAN, the evil (kind of) antagonist AI character, was a key inspiration for the similar (but more humorous) AI character GLaDOS in Portal and Portal 2.  System Shock 2 came out very close to Deus Ex, which itself had been heavily influenced by the original System Shock.

Arguably the biggest legacy of the two games was that in 2007 Irrational Games would go on to make a "spiritual sequel" to the games, which went on to become a massive, international hit by the name of BioShock. It was followed by BioShock 2 (2010) and BioShock Infinite (2013). However, some critics cite System Shock 2 (which a true RPG, not a FPS like the BioShock franchise) as being superior for giving the player much greater control and choice in the narrative.
Posted by Adam Whitehead at 21:26