After the unbridled critical slamming of The Phantom Menace (although its $1 billion box office showed it didn't hurt too much), hopes were high that Attack of the Clones could repair some of the damage George Lucas had done to his own franchise. A more epic, adult story about the Galactic Republic's descent into chaos and war, showing the first signs of Anakin Skywalker's fall to the Dark Side and expanding on those fleeting mentions of the Clone Wars in the original movies. What could go wrong? 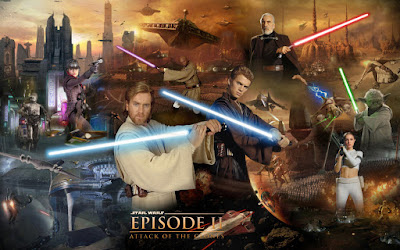 As it turns out, almost everything. Like The Phantom Menace, the first act of Attack of the Clones is a disjointed mess with lots of talk about political turmoil and separatists but never a clear definition of the stakes or scale of the problem. We find out that someone is trying to kill Amidala, but we're not sure how real the threat is and what its purpose is until way too late in the film (the fact it's a bluff is also not really explained at all, which I think was Lucas going for subtlety but came across as poor plotting). The story is muddled and disjointed and Obi-Wan's solo investigation into the clone army on Kamino is baffling. Clearly the clone army has been set up by Sidious to bring about war, but at no point does any of the Jedi consider this possibility and when called upon simply employ them on the battlefield without any further consideration of the fact they are being manipulated by outside forces.

Elsewhere, the film has a tall order in introducing us to the adult Anakin, making us feel some empathy for him and then buying his descent into the dark side. The problem is that none of this works, a direct result of Lucas's poor decision in the first film to introduce Anakin at far too young an age. There is insufficient time to tell all of this story effectively and also develop Anakin's relationship with Amidala in a convincing manner: her falling in love with him when he's the heroic young Jedi apprentice first and then trying to help stop his descent into the Dark Side would have made for a better, more tragic story. Her falling in love with him whilst he's sliding towards madness and evil is a different, more complex and far more disturbing story which George Lucas is completely incapable of addressing, let alone delivering in a convincing manner.

While The Phantom Menace recovered, to a limited degree, to deliver an ultimately watchable (if barely) film, Attack of the Clones never really does this. There are some fleeting good moments: Obi-Wan and Jango Fett's fight in the rain starts off well before fizzling out, the design work is even more spectacular than the first film and Christopher Lee's charisma helps lift some of the leaden pacing in the finale. Using Jar-Jar to bring down the Republic is also a cynical but still amusing story note, although it could have been sold a bit better in the third film when he realised what he'd done. But the film's finale is nonsensical rubbish, there is a massive overuse of CGI that removes weight and tension from proceedings (although, in the heat of the chaos, there are a few excellent individual shots and some great moments of cinematography) and the C-3PO head swapping comedy routine is more annoying even in its limited lifespan than the entirety of Jar-Jar's appearance in the trilogy. Yoda's lightsabre fight with Dooku is also appalling, the sort of thing best left to the imagination rather than shown on screen.

The biggest sin of Attack of the Clones is not just that's it's an awful movie, but there are brief glimpses of a far more powerful, interesting and darker movie that could have been made if Lucas had let someone else handle the scripting and direction. To his credit, the actual story has enormous potential, but the execution fails on every single level. Attack of the Clones (*½) is available now as part of the complete (but soon not to be) Star Wars Saga box set (UK, USA).
Posted by Adam Whitehead at 23:40