According to some viewpoints, Revenge of the Sith is the best film of the Star Wars prequels and helps redeem the trilogy from being a total waste of time. This is an arguable point, possibly generated by the fact that when it came out people were so relieved it wasn't as bad as Attack of the Clones that they got a bit carried away with praise. Viewed from a decade later, it's still clearly a deeply flawed movie which fails to come anywhere near to living up to its enormous potential. 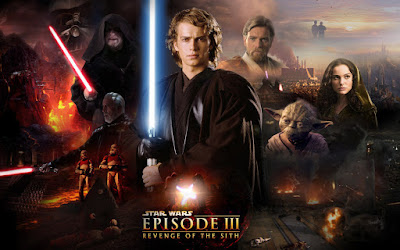 The movie opens with the Clone Wars in their closing stages (if you want to see the course of the conflict, there's a whole six-season animated series doing that which is often far better than the prequels you can check out). As victory nears, Supreme Chancellor Palpatine is expected to hand back his emergency powers to the Senate and resign. However, Palpatine is claiming that the Jedi, made arrogant and militaristic by the course of the war, want power for themselves and no longer believe in the Republic or democracy. Anakin's loyalties are put to the test, especially when he has a vision of Amidala's death and Palpatine promises him that the Dark Side can protect her.

For a start, Revenge of the Sith avoids the problems of its immediate forebears by laying out the stakes more cleanly and concisely: Palpatine wants power, the Jedi want to stop him but don't really know how to and Anakin just wants to save his wife from death. Palpatine's manipulations of Anakin are obvious and crudely unsubtle, but aren't completely implausible, especially given how Attack of the Clones established Anakin as being unreliable, arrogant and deeply stupid. These scenes would also be more effective if Ian McDiarmid hadn't checked out a movie earlier and was clearly just showing up at this point to cash his cheques (the opera house scene, in which he approaches nuance, is an honourable exception). His snarling, pantomime-buffoon performance is deeply embarrassing and damages the dramatic closing scenes of the movie quite badly.

Elsewhere, the problems in play in Attack of the Clones are ramped up to eleven. There are few scenes which aren't bathed in a distractingly fake CGI sheen, talented actors like Natalie Portman and Ewan McGregor look completely lost when presented with really awful lines and there's an awful lot of action filler which has been thrown in for no explicable reason. But there are also some moments and scenes which actually do work. The dialogue-less moment, backed by one of John Williams's most atypical and haunting scores, when Anakin chooses to side with Palpatine works very well. The Wookies kicking droid backside on Kashyyyk is an effective action moment, paying back them for being written out of Return of the Jedi in favour of the Ewoks. The opening one-shot of the Jedi starfighters joining the battle over Coruscant may be the best opening shot in the entire six-film series bar only A New Hope's. The production design, which emerges as the most consistently excellent facet of the trilogy, is also superb as it begins to transition from the shiny Flash Gordon designs of the previous two movies into the more utilitarian and worn look from the original movies. The lightsabre fight between Anakin and Obi-Wan starts excellently, with some convincingly vicious swordplay and stuntwork backed by a fine John Williams musical moment. The fight is overlong and does get a little silly as the actors balance on bits of metal sticking out of molten hot lava and somehow don't burst into flames.

However, Revenge of the Sith really fails in selling these massive moments that the previous two films have been building to and the later three have alluded to. Order 66, the moment the clones turn on their Jedi allies and murder them, is only really effective once you've seen The Clone Wars spin-off series and know who all these Jedi are. Otherwise they're just characterless ciphers. Yoda and Obi-Wan going into hiding at the end of the movie really don't make much sense - let alone hiding Leia with one of the most prominent politicians in the galaxy and Luke on his dad's own planet with his dad's surname - and may as well have just said, "We need to do this to set up the original movies." Given there's a twenty-year gap between Sith and Hope, the need to leave the film with things exactly where they start in Hope is also bizarre and unnecessary. The audience is probably smart enough to join in the dots.

Revenge of the Sith has some moments which work really well and certainly it's a far more watchable film than the awful Attack of the Clones. But it's still badly-written, poorly-directed and, for the most part, clumsily-acted with severe pacing and structural issues. While the argument over whether this or The Phantom Menace is the best of the trilogy will continue to rage, Revenge of the Sith is by far the most disappointing movie in the series, with the most potential to tell a story that is dark, haunting and heart-breaking. As Matt Stover's vastly superior novelisation of the script shows, George Lucas had a really powerful, tragic story here but in his execution he severely fumbles it.

Revenge of the Sith (**½) is available now as part of the complete (but soon not to be) Star Wars Saga box set (UK, USA).
Posted by Adam Whitehead at 14:16

Can't agree with this review. Usually I feel all your reviews are spot on but not in this case. Revenge of the sith was a very good movie not great but not bad at all.

This movie is easily the dumbest of the prequels.

Anakin is at first willing to join the emperor because he says he can save people from death, without being given any evidence that he can actually do this. Then Palpatine admits he doesn’t know how, but they can try to find out, and Anakin still joins him and tries to kill all his friends. How dumb can you be?

The novelization of this one is so good that it actually made me give this movie more credit than it deserved for a while. Watching it again a year ago fixed that.

Glad you raised Stover's novelisation, which introduced me to his fantastic talent. The tragedy of the prequels was that there was a great story in there (far more than in the originals, which are effectivey every hero story for the last 2 thousand years, but in space) if Lucas had let someone who knew how to write take care of it.

More or less agree, I was not a fan of any of these movies.

However, I only recently took a stab at the animated Clone Wars cartoon (the one you refer to).

It is excellent in my opinion, and fills in some much needed story and character development provides weight to the third film. Highly recommended even for people (like me) who thought the Star Wars Universe had nothing left to offer them.

To the first anon: If you disagree with this review, could you put foward an argument as to why you think it's "good". You haven't put forth a good case as for why this movie should be considered good.

We can only hope that if the new Star Wars films prove successful, the prequels might one day be remade by film makers more talented than Lucas. We can but dream. - Ian