A History of Epic Fantasy - Part 29

One of the most common criticisms of epic fantasy is how lightweight and silly it can be, saying nothing about the human condition or developing relevant themes and instead being consumed by spectacle and forgettable action. This criticism is intermittently justified, with many lightweight or lowbrow works existing in the genre as indeed there are in all genres, but in the 1990s and 2000s fantasy was moving ever more decisively in favour of works which did feature more thought, rumination and artistic intent.

At the forefront of these were works like A Song of Ice and Fire and The Malazan Book of the Fallen, but numerous authors were engaged in writing fantasies that engaged in relevant topics for a contemporary reader, such as religion, power and politics. But three series in particular emerged at the turn of the millennium which provided much food for thought, were all controversial and all highly divisive amongst fans of the genre. 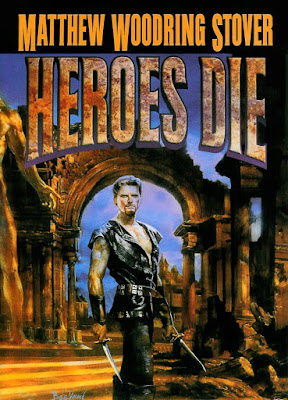 Published in 1998, Heroes Die is the first novel in the Acts of Caine sequence by Matt Woodring Stover. This series is a rationalised fantasy, with an SF explanation for events in the series. In the 23rd Century humanity has created portal technology linking Earth with a traditional fantasy world called Overworld. Special agents known as "Actors" are sent to Overworld to pose as heroes or villains, fighting battles for the amusement of television audiences back home. The most famous of these is Hari Michaelson, known on Overworld as Caine. In Heroes Die Michaelson is sent to rescue his wife, another Actor, who has been taken prisoner by a newly-risen dark lord. However, this dark lord proves to be highly intelligent, capable and formidable, pushing Michaelson and his Caine alter-ego to the limits of their intelligence and endurance to defeat him...if defeat is even an applicable concept.

Heroes Die is a rollicking adventure novel but also a thoughtful book musing on themes such as volition, willpower, violence, entertainment, responsibility and the struggle of the individual against the masses. Its sequel, Blade of Tyshalle (2001), is considerably larger, more complex and delves into these issues in a much darker, bleaker and more complex manner. Caine Black Knife (2008) is a more back-to-basics adventure which features both a new adventure for Caine on Overworld and flashes back to his oft-referenced greatest triumph, retelling that story as a tragedy and trauma. Caine's Law (2012), probably one of the most mind-bending genre novels ever written, forces the reader to reappraise the entire series from its core concepts outwards.

The Acts of Caine sequence remains somewhat obscure, but is highly influential. Scott Lynch and John Scalzi are among the biggest fans of the series, the former citing it as key reference work whilst writing The Lies of Locke Lamora. 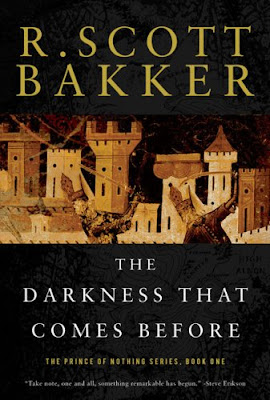 The Darkness That Comes Before

There are few works of fantasy that inspire both such admiration and praise and hatred and bile as R. Scott Bakker's Second Apocalypse sequence. This sequence consists of three sub-series: the Prince of Nothing trilogy (2004-06), the Aspect-Emperor quartet (2009-17) and a forthcoming duology which will wrap the story up.

On its surface, the series is about the arising of the Chosen One. The nations of the Three Seas are gripped by conflict as the Inrithi church calls a grand crusade - the Holy War - to travel a thousand miles across harsh wilderness to destroy the heathen Fanim and take back the holy city of Shimeh. Of course, they are unaware that the legendary Consult (who once almost destroyed the world by summoning a nihilistic force of destruction known as the No-God),  have emerged from millennia in hiding and are now plotting to destroy the world as they know it. It falls to four unlikely figures to save the day: Drusas Achamian, a Mandate wizard and scholar aware of the return of the Consult; Cnaiur urs Skiotha, a formidably cunning "barbarian" warrior and self-proclaimed "Most violent of all men"; Esmenet, a prostitute whose low birth, caste and station has prevented her formidable intelligence and will from being used to its full benefit; and Anasurimbor Kellhus, a mysterious monk from the Ancient North who sees the Holy War as a tool he can use to his own ends.

As the initial trilogy unfolds and Kellhus becomes aware of the threat of the Consult and the No-God, he begins taking command of the Holy War and moulding it into a weapon against the true enemy of humanity, but in the process alienates his would-be friend and ally Achamian. It is only at the end of the trilogy that Achamian realises that Kellhus may indeed be the only person capable of saving the world, but is also a ruthless, amoral being whose thought processes are not quite human. The sequel trilogy, The Aspect-Emperor, picks up twenty years later and sees Kellhus (whose powers are now godlike) leading another crusade - the Great Ordeal - against the Consult, an apparently laudable pre-emptive strike against the enemy before they can resurrect the No-God, but one that goes horribly wrong.

The combined series is unusual for its intelligence and its dwelling on philosophical concepts, as well as its inversion of fantasy tropes, well-written action sequences, spectacular magic and the prevalence of religious metaphysics on the world and characters. It's also been criticised for its graphic sexual imagery and violence (most of it against men, it has to be said) and its perceived sexism (the world of Earwa is based on Biblical notions of original sin and women are not well-treated before Kellhus's rise to power). Heavily influenced by Dune, The Lord of the Rings and the history of both the Crusades and Alexander the Great's empire, it's not quite like anything else in the genre, both for good and bad. 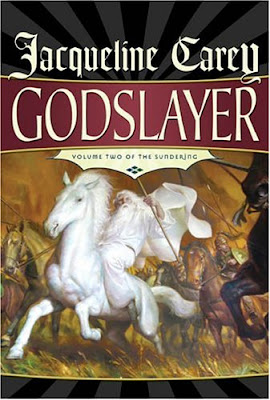 Jacqueline Carey is best-known for her trilogy of trilogies set in a fantasised alternate-history version of France called Terre d'Ange, starting with Kushiel's Dart (2001). But in 2004 and 2005 she published a very long novel split into two volumes called The Sundering (comprising Banewreaker and Godslayer).

The Sundering is, pretty much, The Lord of the Rings as retold from the POV of the Witch-King of Angmar. In this case our protagonist is Tanaros Blacksword, reviled for murdering his king and joining the armies of the dark demigod Satoris the Banewreaker. However, less well-known is that Tanaros's king had seduced and impregnated Tanaros's wife and was a ruthless and unjust ruler. As the series unfolds it is suggested that the "good guys" aren't really that good and that the wizard Malthus (Carey's Gandalf analogue) is manipulative and amoral. The duology is heavily concerned with the idea of morality as a sliding scale rather than a binary choice between good and evil, and the notion that history is written and justified by the winners.

Some of the ideas in The Sundering have been explored independently in more recent works, most notably Joe Abercrombie's First Law universe which likewise features a Gandalf-like wise mentor who in reality is a brutally ruthless political mastermind and highly uncertain ally. But Carey's series is a much more direct riff on Tolkien and the perceived notions of moral relativism in the fantasy genre.


These were all interesting but relatively obscure and financially less-successful works. Indeed, by the mid-2000s it had been some considerable time since an epic fantasy author had launched and been an immediate big success. Perhaps, some mused, the genre had had its day and was now going into decline? But over the next few years a number of writers debuted whose books were not only critically successful but also sold a very large number of copies, restoring the genre to the top of the bestseller lists.
Posted by Adam Whitehead at 16:02

Email ThisBlogThis!Share to TwitterShare to FacebookShare to Pinterest
Labels: acts of caine, banewreaker, heroes die, history of epic fantasy, jacqueline carey, matthew woodring stover, r. scott bakker, the darkness that comes before, the prince of nothing, the sundering

Bakker is anti-good. I won't waste much time bothering to dissect his Prince of Nothing series. I bought it, I read it and I refuse to empower it's nihilism with my own passion.

Don't know the other series, will have to check it out, so thanks for that.

Since reading Scott Bakker, I have a hard time to really enjoy the lighter prose and story offered by other authors. I have read almost every other author introduced in your blog post series. For me, SB books have simply improved from the first to White Luck Warrior. In my opinion, the jump in writing quality from The Wheel of Time to Scott Bakker is not unlike that from Harry Potter to GRRM

Great synopsis of The Darkness that Comes Before, Adam. To your point on its philosophical nature, I think the series is worth reading just for the quotes and proverbs that open every chapter.

Bakker is a special author. I have a tremendous amount of fantasy in life, and he has produced something, a work of fiction that is significantly different than anything else that has been written on this planet. His prose is among the best the genre has ever produced (along with authors like Guy Gavriel Kay and Gene Wolfe. His writing is beautiful even when he is describing mundane scenes with no real narrative. Yet, he also writes compelling, exciting well paced narratives. Philosophically and intellectually he is probably the deepest writer the fantasy world has seen, at least that I have seen. Although I'm sure theres probably a few others who could vie for this title. Bakker is willing to take risks that other writers will not take. The misogyny in the book is rampant, along with vile cruelty and depravity. I understand that many people find the explicit content objectionable. Those are people who are looking for narratives and characters that make them feel good or reinforce their personal values. But a true artist does not compromise. Bakker does not write to entertain...he writes to enlighten the reader and help the reader understand what it is to be human. A close reading of these books can help even an exceptionally intelligent person grow significantly in a short period of time. Only great works of literature can do that. And that is Bakkers greatness. Many authors fare well when judged by genre standards, but after all is said and done only a handful of fantasy authors are revered outside then genre many decades later. I am talking about authors like Tolkien, Le Guin, Wolfe, Baum, Carroll and so on. Aspect-Emperor is a work of major literary and philosophical importance. I believe someday it will be read and discussed in graduate level literature and philosophy courses. People will write dissertations about it. How many authors can you say that about?